Context. The Lyman-α line in the ultraviolet (UV) and the [CII] line in the far-infrared (FIR) are widely used tools to identify galaxies in the early Universe and to obtain insights into interstellar medium (ISM) properties in high-redshift galaxies. By combining data obtained with ALMA in band 7 at ∼320 GHz as part of the ALMA Large Program to INvestigate [CII] at Early Times (ALPINE) with spectroscopic data from DEIMOS at the Keck Observatory, VIMOS and FORS2 at the Very Large Telescope, we assembled a unique sample of 53 main-sequence star-forming galaxies at 4.4 < z < 6 in which we detect both the Lyman-α line in the UV and the [CII] line in the FIR.
Aims: The goal of this paper is to constrain the properties of the Lyα emission in these galaxies in relation to other properties of the ISM.
Methods: We used [CII], observed with ALMA, as a tracer of the systemic velocity of the galaxies, and we exploited the available optical spectroscopy to obtain the Lyα-[CII] and ISM-[CII] velocity offsets.
Results: We find that 90% of the selected objects have Lyα-[CII] velocity offsets in the range 0 < ΔvLyα - [CII] < 400 km s-1, in line with the few measurements available so far in the early Universe, and significantly smaller than those observed at lower redshifts. At the same time, we observe ISM-[CII] offsets in the range -500 < ΔvISM-[CII] < 0 km s-1, in line with values at all redshifts, which we interpret as evidence for outflows in these galaxies. We find significant anticorrelations between ΔvLyα-[CII] and the Lyα rest-frame equivalent width EW0(Lyα) (or equivalently, the Lyα escape fraction fesc(Lyα)): galaxies that show smaller ΔvLyα-[CII] have larger EW0(Lyα) and fesc(Lyα).
Conclusions: We interpret these results in the framework of available models for the radiative transfer of Lyα photons. According to the models, the escape of Lyα photons would be favored in galaxies with high outflow velocities, producing large EW0(Lyα) and small ΔvLyα-[CII], in agreement with our observations. The uniform shell model would also predict that the Lyα escape in galaxies with slow outflows (0 < vout < 300 km s-1) is mainly determined by the neutral hydrogen column density (NHI) along the line of sight, while the alternative model by Steidel et al. (2010, ApJ, 717, 289) would more highly favor a combination of NHI at the systemic velocity and covering fraction as driver of the Lyα escape. We suggest that the increase in Lyα escape that is observed in the literature between z ∼ 2 and z ∼ 6 is not due to a higher incidence of fast outflows at high redshift, but rather to a decrease in average NHI along the line of sight, or alternatively, a decrease in HI covering fraction. 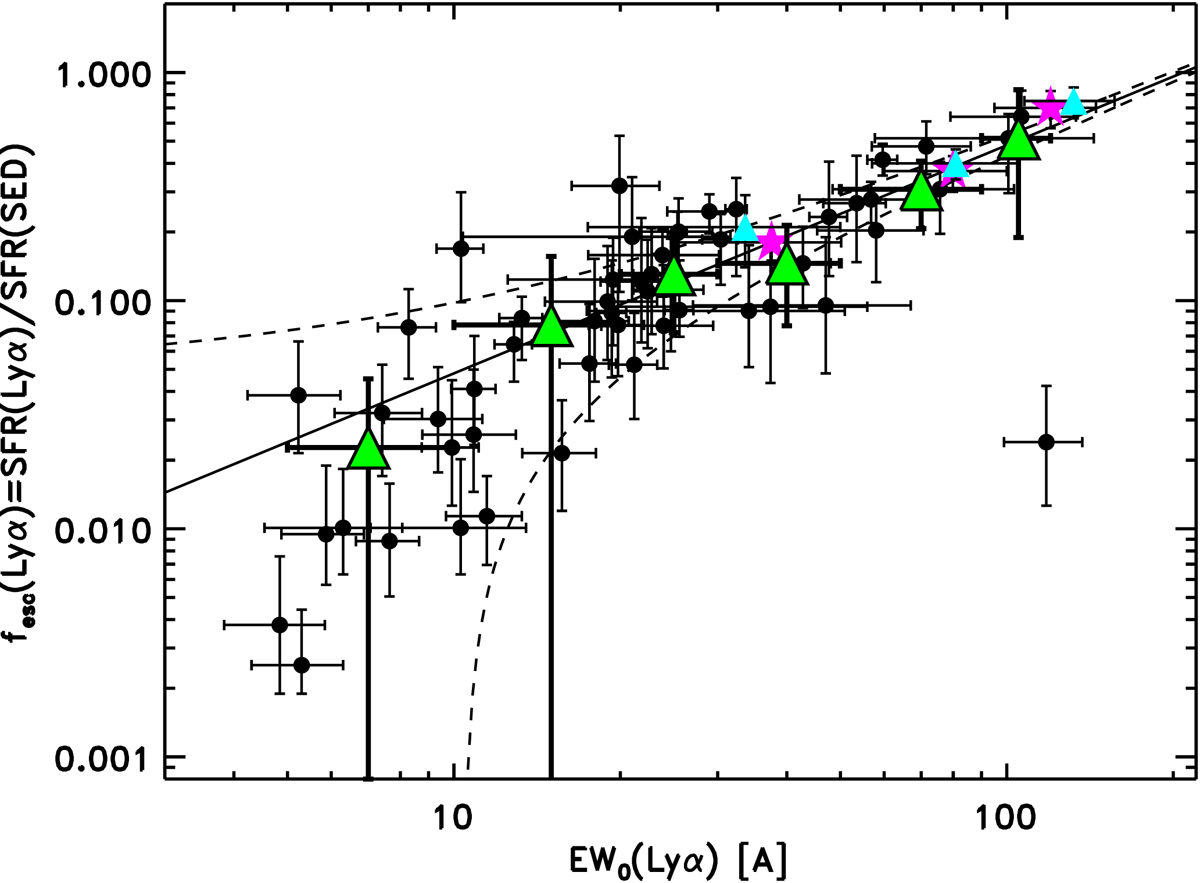