Context. Understanding stellar activity in M dwarfs is fundamental to improving our knowledge of the physics of stellar atmospheres and for planet search programmes. High levels of stellar activity (also frequently associated with flare events) can cause additional variations in the stellar emission that contaminate the signal induced by a planet and that need to be corrected. The study of activity indicators in active stars can improve our capability of modelling the signal generated by magnetic activity.
Aims: In this work we present measurements of activity indicators at visible wavelength for a star with a high activity level, AD Leonis, observed with HARPS in 2006, and HARPS-N in 2018. Our aim is to understand the behaviour of stellar chromospheres of M stars, studying the more sensitive chromospheric activity indicators. We also focus on characterising their variability and on finding the correlations among these indicators to obtain information on the origin of the magnetic activity in low-mass stars.
Methods: We performed a study of the main optical activity indicators (Ca II H&K, Balmer lines, Na I D1,2 doublet, He I D3, and other helium lines) measured for AD Leonis using the data provided by the HARPS-N high-resolution spectrograph at the Telescopio Nazionale Galileo in 2018, and by the HARPS instrument at La Silla observatory in 2006. Spectra were flux-calibrated in units of flux at the stellar surface. We measured excess flux of the selected activity indicators. The correlations between the different activity indicators as well as the temporal evolution of fluxes were analysed. A stellar flare was identified during the 2018 observing run and the Hα, Hβ, He I 4471 Å, and He I 5876 Å lines were analysed in detail by fitting the line profiles with two Gaussian components.
Results: We found that the Ca II H&K flux excesses are strongly correlated with each other, but the Ca II H&K doublet is generally less correlated with the other indicators. Moreover, Hα is correlated with Na I doublet and helium lines. Analysing the time variability of flux of the studied lines, we found a higher level of activity of the star during the observations in 2018 than in 2006, while Ca II H&K showed more intense emission on spectra obtained during the observations in 2006. Thanks to a detailed analysis of selected line profiles, we investigated the flare evaluating the mass motion during the event. 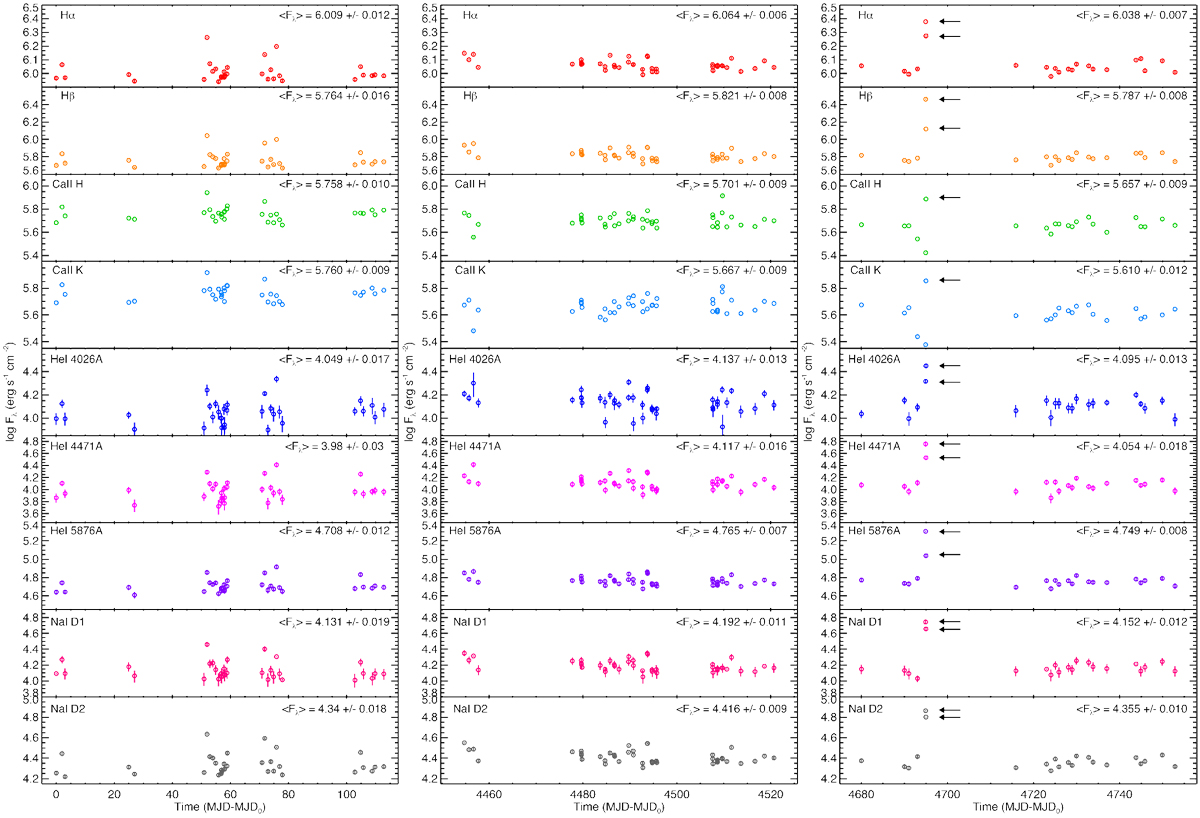