Understanding the origins of the heliosphere: integrating observations and measurements from Parker Solar Probe, Solar Orbiter, and other space- and ground-based observatories

Context. The launch of Parker Solar Probe (PSP) in 2018, followed by Solar Orbiter (SO) in February 2020, has opened a new window in the exploration of solar magnetic activity and the origin of the heliosphere. These missions, together with other space observatories dedicated to solar observations, such as the Solar Dynamics Observatory, Hinode, IRIS, STEREO, and SOHO, with complementary in situ observations from WIND and ACE, and ground based multi-wavelength observations including the DKIST observatory that has just seen first light, promise to revolutionize our understanding of the solar atmosphere and of solar activity, from the generation and emergence of the Sun's magnetic field to the creation of the solar wind and the acceleration of solar energetic particles.
Aims: Here we describe the scientific objectives of the PSP and SO missions, and highlight the potential for discovery arising from synergistic observations. Here we put particular emphasis on how the combined remote sensing and in situ observations of SO, that bracket the outer coronal and inner heliospheric observations by PSP, may provide a reconstruction of the solar wind and magnetic field expansion from the Sun out to beyond the orbit of Mercury in the first phases of the mission. In the later, out-of-ecliptic portions of the SO mission, the solar surface magnetic field measurements from SO and the multi-point white-light observations from both PSP and SO will shed light on the dynamic, intermittent solar wind escaping from helmet streamers, pseudo-streamers, and the confined coronal plasma, and on solar energetic particle transport.
Methods: Joint measurements during PSP-SO alignments, and magnetic connections along the same flux tube complemented by alignments with Earth, dual PSP-Earth, and SO-Earth, as well as with STEREO-A, SOHO, and BepiColumbo will allow a better understanding of the in situ evolution of solar-wind plasma flows and the full three-dimensional distribution of the solar wind from a purely observational point of view. Spectroscopic observations of the corona, and optical and radio observations, combined with direct in situ observations of the accelerating solar wind will provide a new foundation for understanding the fundamental physical processes leading to the energy transformations from solar photospheric flows and magnetic fields into the hot coronal plasma and magnetic fields and finally into the bulk kinetic energy of the solar wind and solar energetic particles.
Results: We discuss the initial PSP observations, which already provide a compelling rationale for new measurement campaigns by SO, along with ground- and space-based assets within the synergistic context described above. 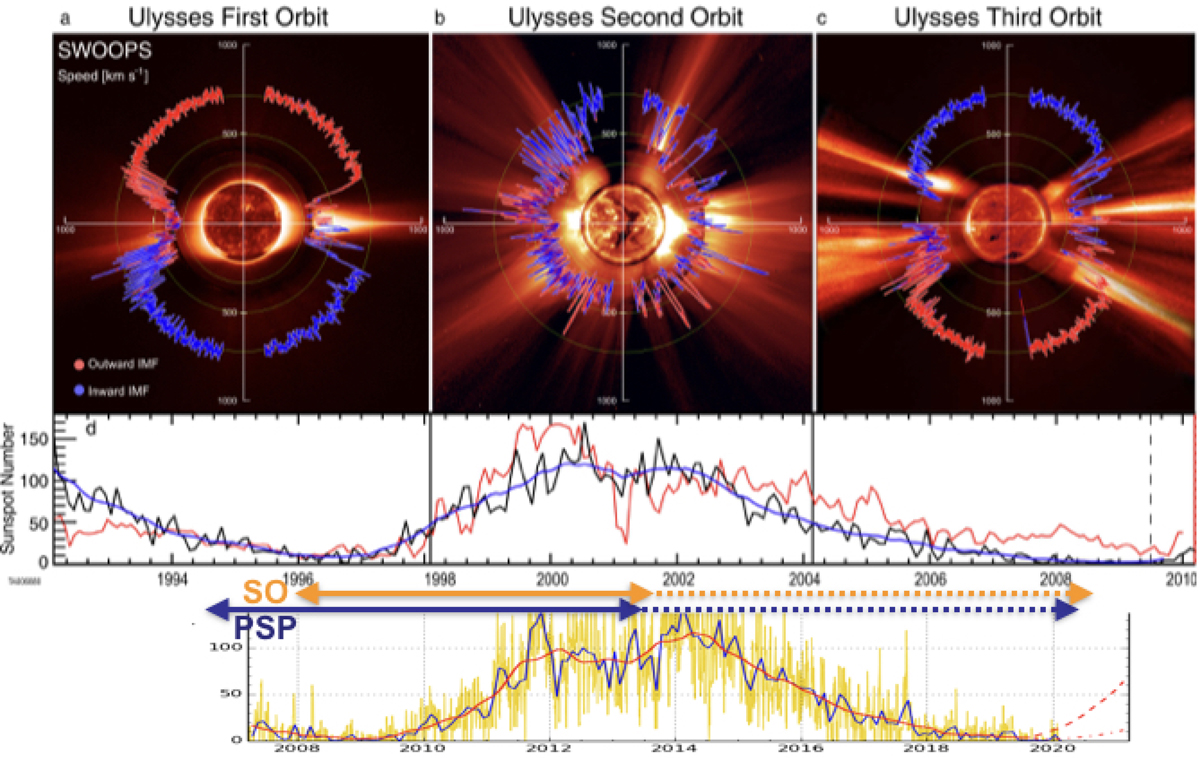