Context. Far infrared cooling of excited gas around protostars has been predominantly studied in the context of pointed observations. Large-scale spectral maps of star forming regions enable the simultaneous, comparative study of the gas excitation around an ensemble of sources at a common frame of reference, therefore, providing direct insights in the multitude of physical processes involved.
Aims: We employ extended spectral-line maps to decipher the excitation, the kinematical, and dynamical processes in NGC 1333 as revealed by a number of different molecular and atomic lines, aiming to set a reference for the applicability and limitations of different tracers in constraining particular physical processes.
Methods: We reconstructed line maps for H2, CO, H2O, and [C I] using data obtained with the Spitzer infrared spectrograph and the Herschel HIFI and SPIRE instruments. We compared the morphological features revealed in the maps and derive the gas excitation conditions for regions of interest employing local thermodynamic equilibrium (LTE) and non-LTE methods. We also calculated the kinematical and dynamical properties for each outflow tracer in a consistent manner for all observed outflows driven by protostars in NGC 1333. We finally measured the water abundance in outflows with respect to carbon monoxide and molecular hydrogen.
Results: CO and H2 are highly excited around B-stars and, at lower, levels trace protostellar outflows. H2O emission is dominated by a moderately fast component associated with outflows. H2O also displays a weak, narrow-line component in the vicinity of B-stars associated to their ultraviolet (UV) field. This narrow component is also present in a few of outflows, indicating UV radiation generated in shocks. Intermediate J CO lines appear brightest at the locations traced by the narrow H2O component, indicating that beyond the dominating collisional processes, a secondary, radiative excitation component can also be active. The morphology, kinematics, excitation, and abundance variations of water are consistent with its excitation and partial dissociation in shocks. Water abundance ranges between 5 × 10-7 and ~10-5, with the lower values being more representative. Water is brightest and most abundant around IRAS 4A, which is consistent with the latter hosting a hot corino source. [C I] traces dense and warm gas in the envelopes surrounding protostars. Outflow mass flux is highest for CO and decreases by one and two orders of magnitude for H2 and H2O, respectively.
Conclusions: Large-scale spectral line maps can provide unique insights into the excitation of gas in star-forming regions. A comparative analysis of line excitation and morphologies at different locations allows us to decipher the dominant excitation conditions in each region in addition to isolating exceptional cases. 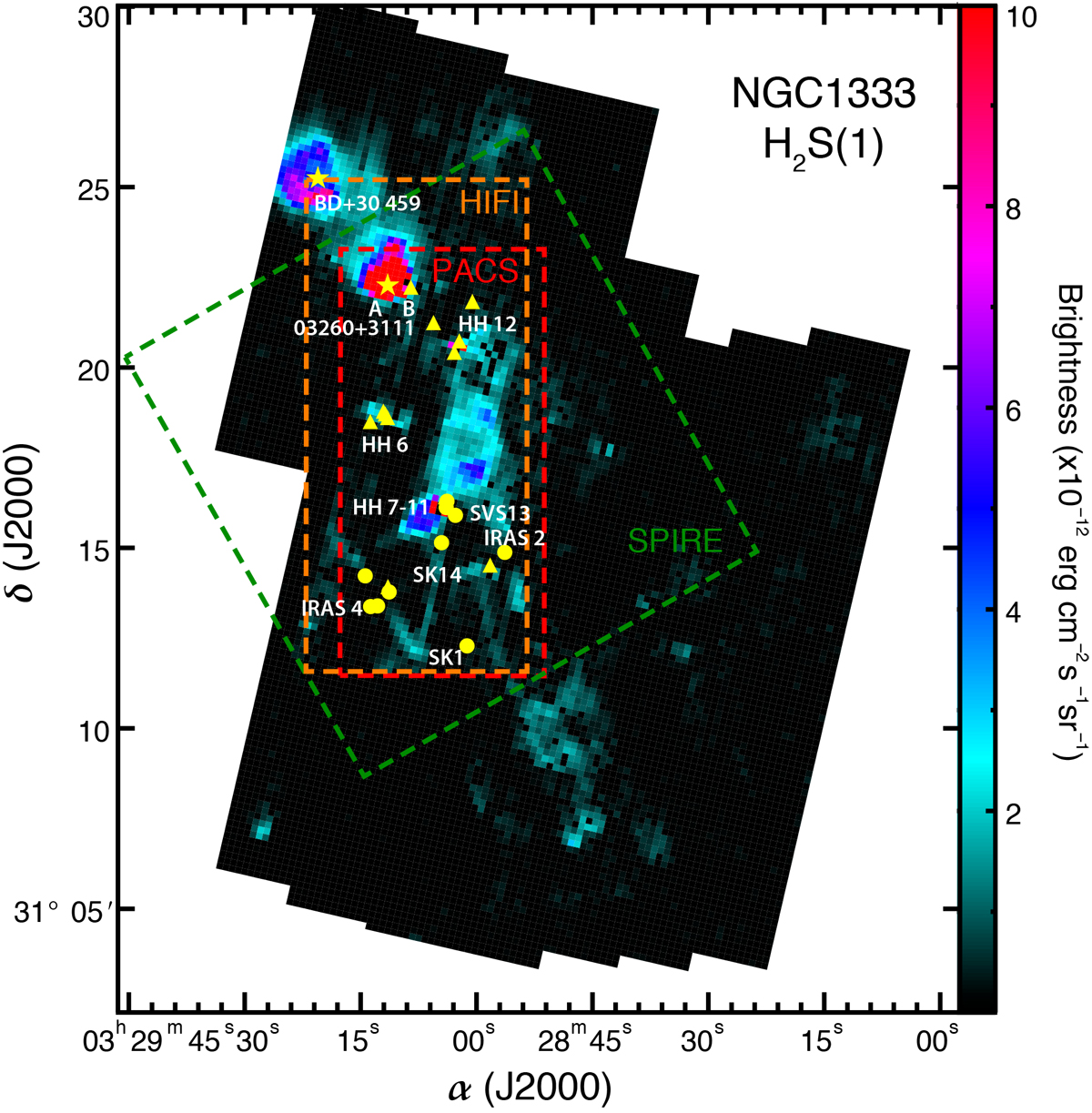