Sunquake with a second bounce, other sunquakes, and emission associated with the X9.3 flare of 6 September 2017. I. Observations


Aims: The 6 September 2017 X9.3 solar flare produced very unique observations of magnetic field transients and a few seismic responses, or sunquakes, detected by the Helioseismic and Magnetic Imager (HMI) instrument aboard Solar Dynamic Observatory (SDO) spacecraft, including the strongest sunquake ever reported. This flare was one of a few flares occurring within a few days or hours in the same active region. Despite numerous reports of the fast variations of magnetic field, and seismic and white light emission, no attempts were made to interpret the flare features using multi-wavelength observations. In this study, we attempt to produce the summary of available observations of the most powerful flare of the 6 September 2017 obtained using instruments with different spatial resolutions (this paper) and to provide possible interpretation of the flaring events, which occurred in the locations of some seismic sources (a companion Paper II).
Methods: We employed non-linear force-free field extrapolations followed by magnetohydrodynamic simulations in order to identify the presence of several magnetic flux ropes prior to the initiation of this X9.3 flare. Sunquakes were observed using the directional holography and time-distance diagram detection techniques. The high-resolution method to detect the Hα line kernels in the CRISP instrument at the diffraction level limit was also applied.
Results: We explore the available γ-ray (GR), hard X-ray (HXR), Lyman-α, and extreme ultra-violet (EUV) emission for this flare comprising two flaring events observed by space- and ground-based instruments with different spatial resolutions. For each flaring event we detect a few seismic sources, or sunquakes, using Dopplergrams from the HMI/SDO instrument coinciding with the kernels of Hα line emission with strong redshifts and white light sources. The properties of sunquakes were explored simultaneously with the observations of HXR (with KONUS/WIND and the Reuven Ramaty High Energy Solar Spectroscopic Imager payload), EUV (with the Atmospheric Imaging Assembly (AIA/SDO and the EUV Imaging Spectrometer aboard Hinode payload), Hα line emission (with the CRisp Imaging Spectro-Polarimeter (CRISP) in the Swedish Solar Telescope), and white light emission (with HMI/SDO). The locations of sunquake and Hα kernels are associated with the footpoints of magnetic flux ropes formed immediately before the X9.3 flare onset.
Conclusions: For the first time we present the detection of the largest sunquake ever recorded with the first and second bounces of acoustic waves generated in the solar interior, the ripples of which appear at a short distance of 5-8 Mm from the initial flare location. Four other sunquakes were also detected, one of which is likely to have occurred 10 min later in the same location as the largest sunquake. Possible parameters of flaring atmospheres in the locations with sunquakes are discussed using available temporal and spatial coverage of hard X-ray, GR, EUV, hydrogen Hα-line, and white light emission in preparation for their use in an interpretation to be given in Paper II. 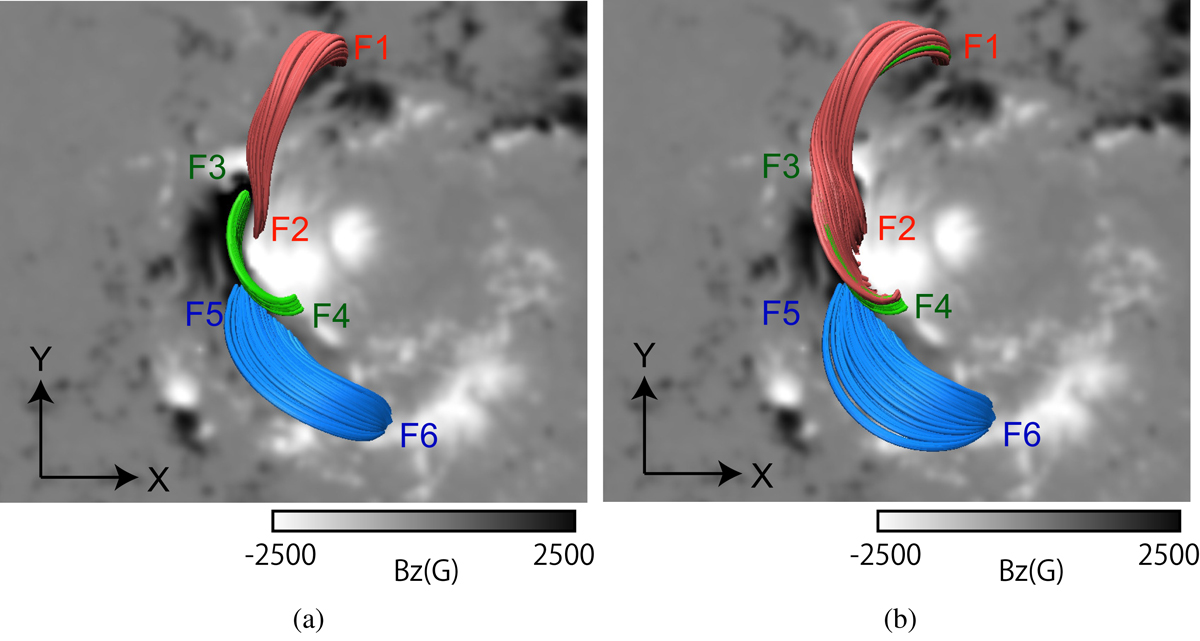