Context. Herschel observations of nearby clouds in the Gould Belt support a paradigm for low-mass star formation, starting with the generation of molecular filaments, followed by filament fragmentation, and the concentration of mass into self-gravitating prestellar cores. In the case of the Ophiuchus molecular complex, a rich star formation activity has been documented for many years inside the clumps of L1688, the main and densest cloud of the complex, and in the more quiescent twin cloud L1689 thanks to extensive surveys at infrared and other wavelengths.
Aims: With the unique far-infrared and submillimeter continuum imaging capabilities of the Herschel Space observatory, the closeby (d = 139 pc) Ophiuchus cloud was extensively mapped at five wavelengths from 70 to 500 μm with the aim of providing a complete census of dense cores in this region, including unbound starless cores, bound prestellar cores, and protostellar cores.
Methods: Taking full advantage of the high dynamic range and multi-wavelength nature of the Herschel data, we used the multi-scale decomposition algorithms getsources and getfilaments to identify an essentially complete sample of dense cores and filaments in the cloud and study their properties.
Results: The densest clouds of the Ophiuchus complex, L1688 and L1689, which thus far are only indirectly described as filamentary regions owing to the spatial distribution of their young stellar objects, are now confirmed to be dominated by filamentary structures. The tight correlation observed between prestellar cores and filamentary structures in L1688 and L1689 supports the view that solar-type star formation occurs primarily in dense filaments. While the sub clouds of the complex show some disparities, L1689 being apparently less efficient than L1688 at forming stars when considering their total mass budgets, both sub clouds share almost the same prestellar core formation efficiency in dense molecular gas. We also find evidence in the Herschel data for a remarkable concentric geometrical configuration in L1688 which is dominated by up to three arc-like compression fronts and has presumably been created by shockwave events emanating from the Sco OB2 association, including the neighboring massive (O9V) star σ Sco.
Conclusions: Our Herschel study of the well-documented Ophiuchus region has allowed us to further analyze the influence of several early-type (OB) stars surrounding the complex, thus providing positive feedback and enhancing star formation activity in the dense central part of the region, L1688. 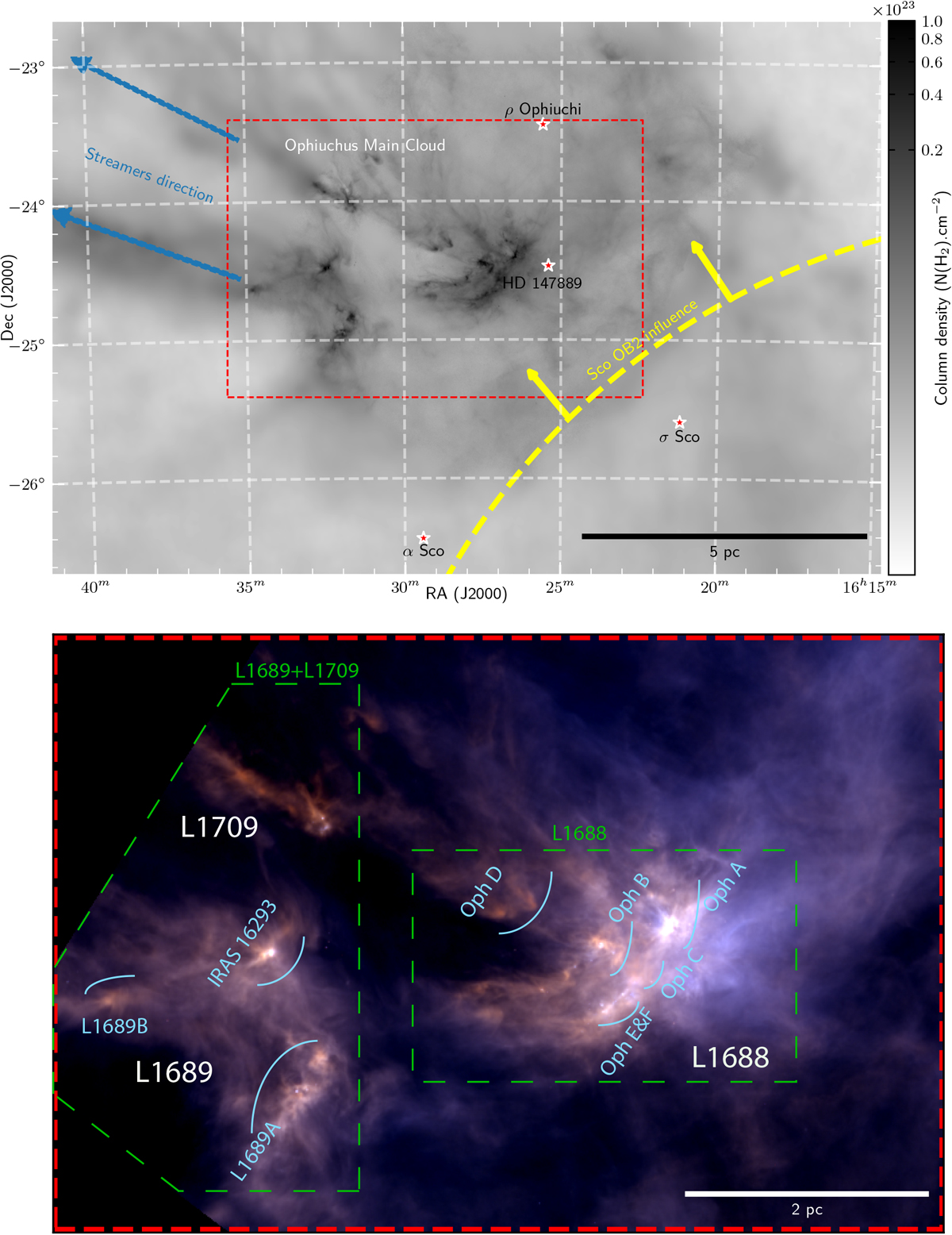