Context. The Lyα emitter (LAE) fraction, XLAE, is a potentially powerful probe of the evolution of the intergalactic neutral hydrogen gas fraction. However, uncertainties in the measurement of XLAE are still under debate.
Aims: Thanks to deep data obtained with the integral field spectrograph Multi Unit Spectroscopic Explorer (MUSE), we can measure the evolution of the LAE fraction homogeneously over a wide redshift range of z ≈ 3-6 for UV-faint galaxies (down to UV magnitudes of M1500 ≈ -17.75). This is a significantly fainter range than in former studies (M1500 ≤ -18.75) and it allows us to probe the bulk of the population of high-redshift star-forming galaxies.
Methods: We constructed a UV-complete photometric-redshift sample following UV luminosity functions and measured the Lyα emission with MUSE using the latest (second) data release from the MUSE Hubble Ultra Deep Field Survey.
Results: We derived the redshift evolution of XLAE for M1500 ∈ [ - 21.75; -17.75] for the first time with a equivalent width range EW(Lyα) ≥ 65 Å and found low values of XLAE ≲ 30% at z ≲ 6. The best-fit linear relation is XLAE = 0.07+0.06-0.03z - 0.22+0.12-0.24. For M1500 ∈ [ - 20.25; -18.75] and EW(Lyα) ≥ 25 Å, our XLAE values are consistent with those in the literature within 1σ at z ≲ 5, but our median values are systematically lower than reported values over the whole redshift range. In addition, we do not find a significant dependence of XLAE on M1500 for EW(Lyα) ≥ 50 Å at z ≈ 3-4, in contrast with previous work. The differences in XLAE mainly arise from selection biases for Lyman Break Galaxies (LBGs) in the literature: UV-faint LBGs are more easily selected if they have strong Lyα emission, hence XLAE is biased towards higher values when those samples are used.
Conclusions: Our results suggest either a lower increase of XLAE towards z ≈ 6 than previously suggested, or even a turnover of XLAE at z ≈ 5.5, which may be the signature of a late or patchy reionization process. We compared our results with predictions from a cosmological galaxy evolution model. We find that a model with a bursty star formation (SF) can reproduce our observed LAE fractions much better than models where SF is a smooth function of time. 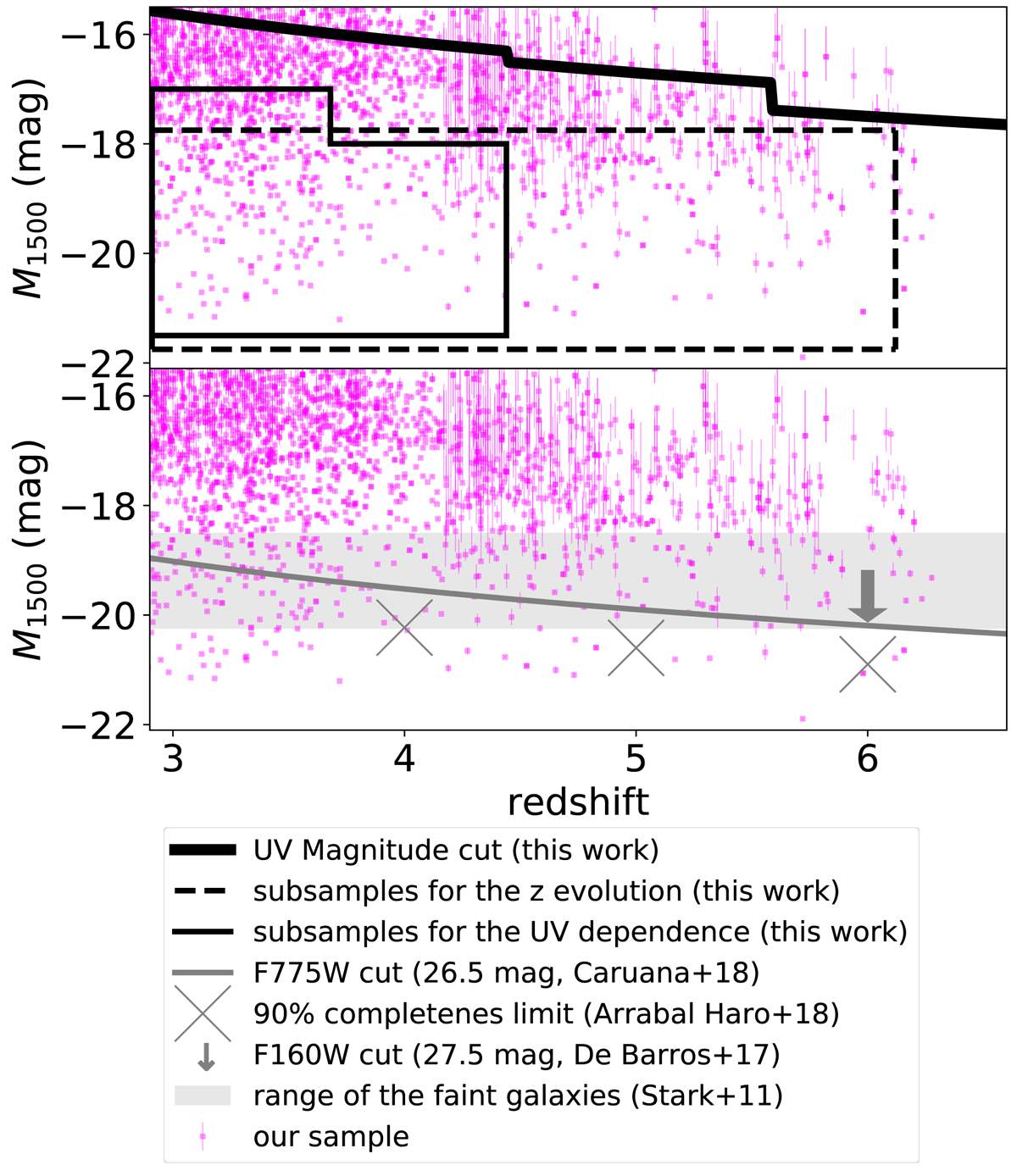