Aims: The Gaia data release 2 (DR2) contains > 6000 objects with parallaxes (Plx + 3 × e_Plx) > 50 mas, placing them within 20 pc from the Sun. Because the expected numbers based on extrapolating the well-known 10 pc census are much lower, nearby Gaia stars need a quality assessment. The 20 pc sample of white dwarfs (WDs) has been verified and completed with Gaia DR2. We here confirm and complete the 20 pc sample of ultracool dwarfs (UCDs) with spectral types ≳M7 and given Gaia DR2 parallaxes.
Methods: Dividing the Gaia DR2 20 pc sample into subsamples of various astrometric and photometric quality, we studied their distribution on the sky, in the MG versus G - RP colour-magnitude diagram (CMD), and as a function of G magnitude and total proper motion. After excluding 139 known WDs and 263 known UCDs from the CMD, we checked all remaining ≈3500 candidates with MG > 14 mag (used to define UCDs in this study) for the correctness of their Gaia DR2 proper motions by visual inspection of finder charts, comparison with proper motion catalogues, and comparison with our own proper motion measurements. For confirmed UCD candidates we estimated spectral types photometrically using Gaia and near-infrared absolute magnitudes and colours.
Results: We failed to confirm new WDs, but found 50 new UCD candidates that are not mentioned in three previous studies using Gaia DR2. They have relatively small proper motions and low tangential velocities and are concentrated towards the Galactic plane. Half of them have spectral types in SIMBAD and/or previous non-Gaia distance estimates that placed them already within 20 pc. For 20 of the 50 objects, we estimated photometric spectral types of M6-M6.5, slightly below the classical UCD spectral type limit. However, seven L4.5-L6.5, four L0-L1, five M8.5-M9.5, and three M7-M8 dwarfs can be considered as completely new UCDs discoveries within 20 pc based on Gaia DR2. Four M6.5 and two L4.5 dwarfs have high membership probabilities (64%-99%) in the ARGUS, AB Doradus, or Carina Near young moving groups. 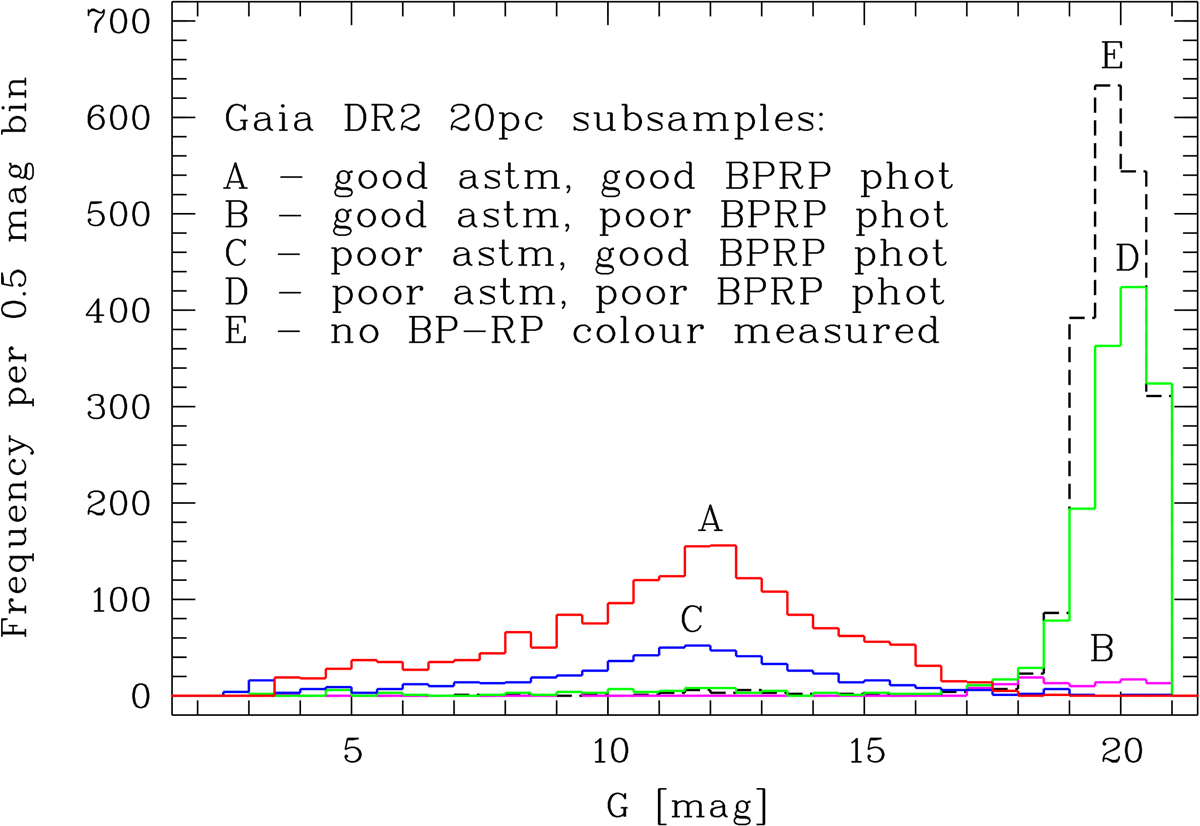