VV 655 and NGC 4418: Implications of an interaction for the evolution of a LIRG

Context. VV 655, a dwarf irregular galaxy with HI tidal debris, is a companion to the lenticular luminous infrared galaxy (LIRG) NGC 4418. NGC 4418 stands out among nearby LIRGs due to its dense central concentration of molecular gas and the dusty, bi-polar structures along its minor axis suggestive of a wind driven by a central starburst and possible nuclear activity.
Aims: We seek to understand the consequences of the ongoing minor interaction between VV 655 and NGC 4418 for the evolution of the LIRG. Specifically, we consider the origin of the gas supply responsible for the unusual nuclear properties of NGC 4418.
Methods: We investigate the structural, kinematic, and chemical properties of VV 655 and NGC 4418 by analyzing archival imaging data and optical spectroscopic observations from the SDSS-III and new spectra from SALT-RSS. We characterize their gas-phase metal abundances and spatially resolved, ionized gas kinematics to better understand whether gas transfer between VV 655 and NGC 4418 resulted in the highly obscured nucleus of the LIRG.
Results: The gas-phase metallicity in NGC 4418 significantly exceeds that in VV 655. No kinematic disturbances in the ionized gas are observed along the minor axis of NGC 4418, but we see evidence for ionized gas outflows from VV 655 that may increase the cross-section for gas stripping in grazing collisions. A faint, asymmetric outer arm is detected in NGC 4418 of the type normally associated with galaxy-galaxy interactions.
Conclusions: The simplest model suggests that the minor interaction between VV 655 and NGC 4418 produced the unusual nuclear properties of the LIRG via tidal torquing of the interstellar medium of NGC 4418 rather than through a significant gas transfer event. In addition to inducing a central concentration of gas in NGC 4418, this interaction also produced an enhanced star formation rate and an outer tidal arm in the LIRG. The VV 655-NGC 4418 system offers an example of the potential for minor collisions to alter the evolutionary pathways of giant galaxies.

Based in part on observations made with the Southern African Large Telescope (SALT) as part of program 2014-2-SCI-052 (P.I.: J. S. Gallagher). 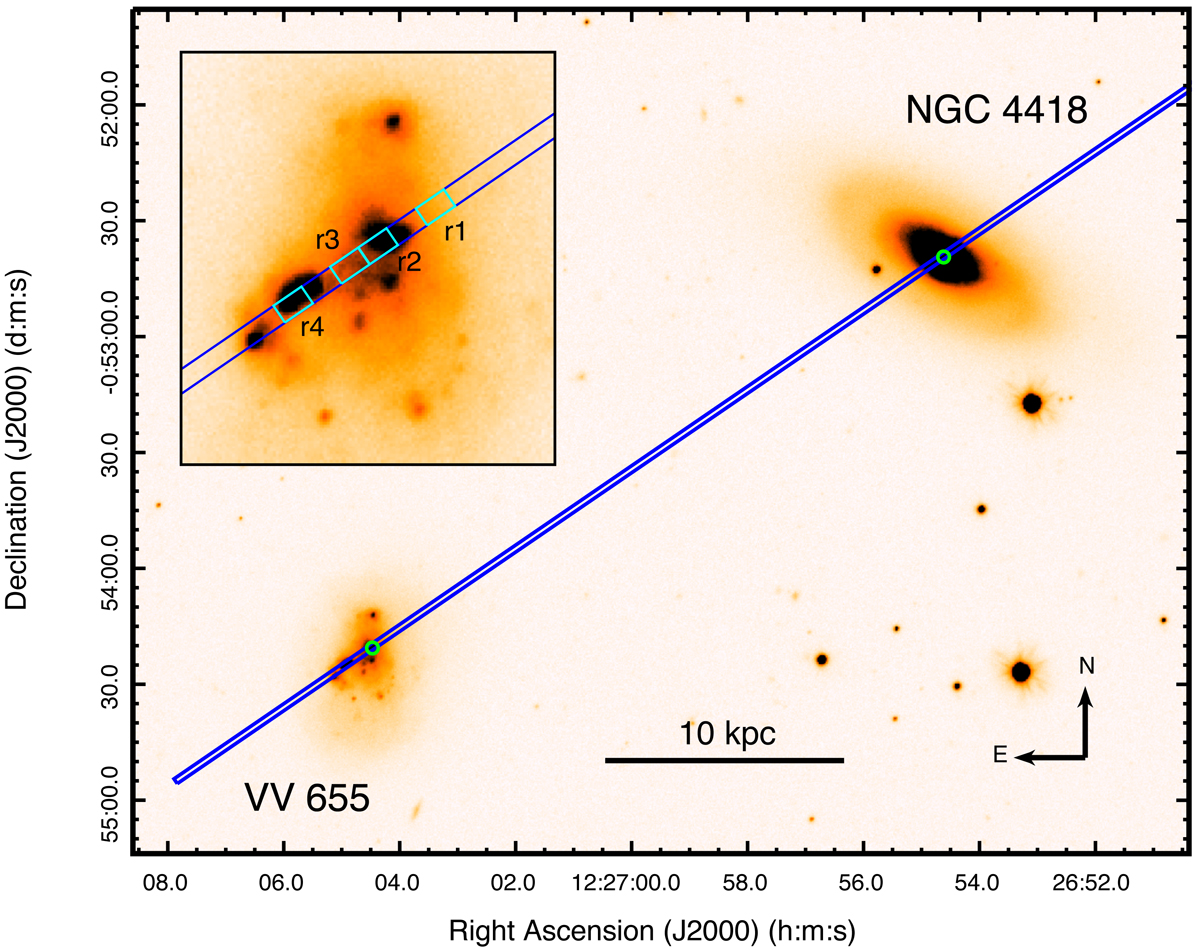