All ten LIGO/Virgo binary black hole (BH-BH) coalescences reported following the O1/O2 runs have near-zero effective spins. There are only three potential explanations for this. If the BH spin magnitudes are large, then: (i) either both BH spin vectors must be nearly in the orbital plane or (ii) the spin angular momenta of the BHs must be oppositely directed and similar in magnitude. Then there is also the possibility that (iii) the BH spin magnitudes are small. We consider the third hypothesis within the framework of the classical isolated binary evolution scenario of the BH-BH merger formation. We test three models of angular momentum transport in massive stars: a mildly efficient transport by meridional currents (as employed in the Geneva code), an efficient transport by the Tayler-Spruit magnetic dynamo (as implemented in the MESA code), and a very-efficient transport (as proposed by Fuller et al.) to calculate natal BH spins. We allow for binary evolution to increase the BH spins through accretion and account for the potential spin-up of stars through tidal interactions. Additionally, we update the calculations of the stellar-origin BH masses, including revisions to the history of star formation and to the chemical evolution across cosmic time. We find that we can simultaneously match the observed BH-BH merger rate density and BH masses and BH-BH effective spins. Models with efficient angular momentum transport are favored. The updated stellar-mass weighted gas-phase metallicity evolution now used in our models appears to be key for obtaining an improved reproduction of the LIGO/Virgo merger rate estimate. Mass losses during the pair-instability pulsation supernova phase are likely to be overestimated if the merger GW170729 hosts a BH more massive than 50 M⊙. We also estimate rates of black hole-neutron star (BH-NS) mergers from recent LIGO/Virgo observations. If, in fact. angular momentum transport in massive stars is efficient, then any (electromagnetic or gravitational wave) observation of a rapidly spinning BH would indicate either a very effective tidal spin up of the progenitor star (homogeneous evolution, high-mass X-ray binary formation through case A mass transfer, or a spin- up of a Wolf-Rayet star in a close binary by a close companion), significant mass accretion by the hole, or a BH formation through the merger of two or more BHs (in a dense stellar cluster). 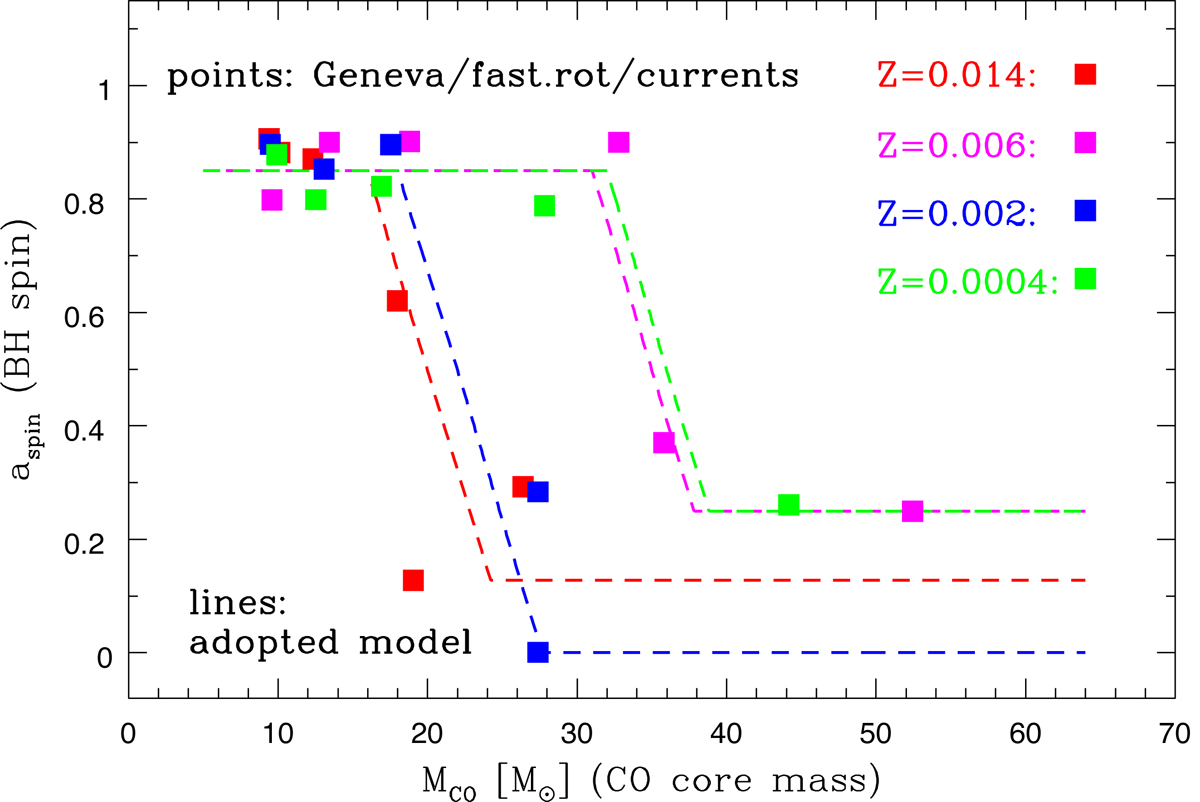