Context. With the advent of space-based asteroseismology, determining accurate properties of red-giant stars using their observed oscillations has become the focus of many investigations due to their implications in a variety of fields in astrophysics. Stellar models are fundamental in predicting quantities such as stellar age, and their reliability critically depends on the numerical implementation of the physics at play in this evolutionary phase.
Aims: We introduce the Aarhus red giants challenge, a series of detailed comparisons between widely used stellar evolution and oscillation codes that aim to establish the minimum level of uncertainties in properties of red giants arising solely from numerical implementations. We present the first set of results focusing on stellar evolution tracks and structures in the red-giant-branch (RGB) phase.
Methods: Using nine state-of-the-art stellar evolution codes, we defined a set of input physics and physical constants for our calculations and calibrated the convective efficiency to a specific point on the main sequence. We produced evolutionary tracks and stellar structure models at a fixed radius along the red-giant branch for masses of 1.0 M⊙, 1.5 M⊙, 2.0 M⊙, and 2.5 M⊙, and compared the predicted stellar properties.
Results: Once models have been calibrated on the main sequence, we find a residual spread in the predicted effective temperatures across all codes of ∼20 K at solar radius and ∼30-40 K in the RGB regardless of the considered stellar mass. The predicted ages show variations of 2-5% (increasing with stellar mass), which we attribute to differences in the numerical implementation of energy generation. The luminosity of the RGB-bump shows a spread of about 10% for the considered codes, which translates into magnitude differences of ∼0.1 mag in the optical V-band. We also compare the predicted [C/N] abundance ratio and find a spread of 0.1 dex or more for all considered masses.
Conclusions: Our comparisons show that differences at the level of a few percent still remain in evolutionary calculations of red giants branch stars despite the use of the same input physics. These are mostly due to differences in the energy generation routines and interpolation across opacities, and they call for further investigation on these matters in the context of using properties of red giants as benchmarks for astrophysical studies.

All our evolutionary calculations and models are available at https://github.com/vsilvagui/aarhus_RG_challenge 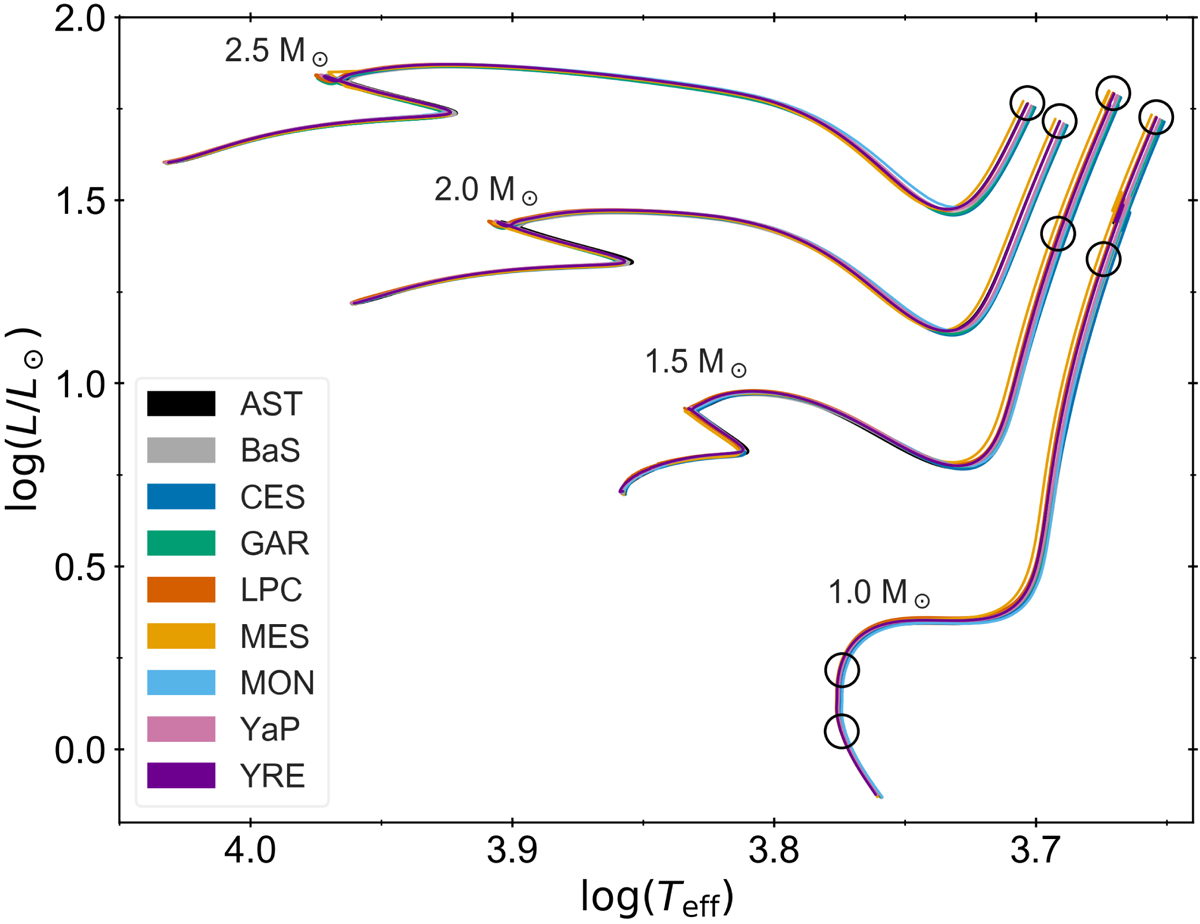