Context. Binarity is a widespread phenomenon around solar-type stars, including the host stars of transiting extrasolar planets.
Aims: We performed a detailed study of six transiting planetary systems with relatively bright stars close enough to affect observations of these systems. These contaminants were characterised in a companion work.
Methods: We used theoretical spectra to propagate the observed K-band light ratios into the optical passbands used to observe these systems. Light curves were analysed whilst taking the contaminating light and its uncertainty into account. We present and applied a method to correct the velocity amplitudes of the host stars for the presence of contaminating light.
Results: We determined the physical properties of six systems (WASP-20, WASP-70, WASP-8, WASP-76, WASP-2, and WASP-131) whilst accounting for contaminating light. In the case of WASP-20, the measured physical properties are very different for the three scenarios considered: ignoring binarity, planet transits brighter star, and planet transits fainter star. In the other five cases, our results are very similar to those obtained when neglecting contaminating light. We used our results to determine the mean correction factors to planet radius, ⟨XR⟩, mass, ⟨XM⟩, and density, ⟨Xρ⟩, caused by nearby objects. We find ⟨XR⟩ = 1.009 ± 0.045, which is smaller than literature values because we were able to reject the possibility that the planet orbits the fainter star in all but one case. We find ⟨XM⟩ = 1.031 ± 0.019, which is larger than ⟨XR⟩ because of the strength of the effect of contaminating light on the radial velocity measurements of the host star. We find ⟨Xρ⟩ = 0.995 ± 0.046: the small size of this correction is due to two effects: the corrections on planet radius and mass partially cancel; and some nearby stars are close enough to contaminate the light curves of the system but not radial velocities of the host star. These corrections can be applied to samples of transiting hot Jupiters to statistically remove biases due to light contamination.
Conclusions: We conclude that binarity of planet host stars is important for the small number of transiting hot Jupiters with a very bright and close nearby star, but it has only a small effect on population-level studies of these objects.

Based on observations collected at the European Organisation for Astronomical Research in the Southern Hemisphere under ESO programmes 098.C-0589(A) and 099.C-0155(A). 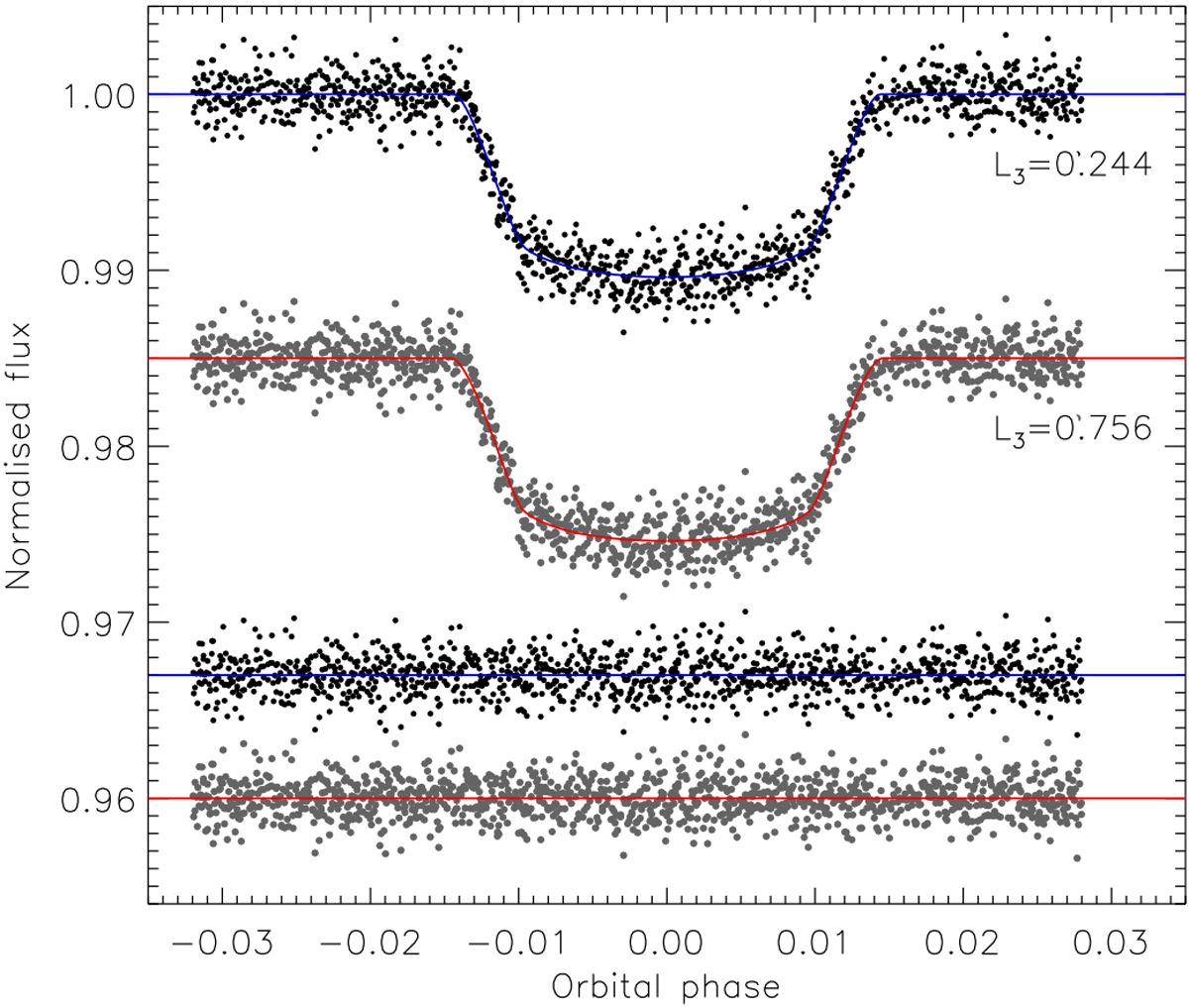