A multiplicity study of transiting exoplanet host stars. I. High-contrast imaging with VLT/SPHERE

Context. Many main-sequence stars are part of multiple systems. The effect of stellar multiplicity on planet formation and migration, however, is poorly understood.
Aims: We study the multiplicity of stars hosting known transiting extra-solar planets to test competing theories on the formation mechanisms of hot Jupiters.
Methods: We observed 45 exoplanet host stars using the infrared dual imaging spectrograph of the Spectro-Polarimetric High-Contrast Exoplanet Research (SPHERE) instrument at the Very Large Telescope to search for potential companions. For each identified candidate companion we determined the probability that it is gravitationally bound to its host by performing common proper motion checks and modelling of synthetic stellar populations around the host. In addition, we derived contrast limits as a function of angular separation to set upper limits on further companions in these systems. We converted the derived contrast into mass thresholds using AMES-Cond, AMES-Dusty, and BT-Settl models.
Results: We detected new candidate companions around K2-38, WASP-72, WASP-80, WASP-87, WASP-88, WASP-108, WASP-118, WASP-120, WASP-122, WASP123, WASP-130, WASP-131, and WASP-137. The closest candidates were detected at separations of 0.''124±0.''007 and 0.''189±0.''003 around WASP-108 and WASP-131; the measured K-band contrasts indicate that these are stellar companions of 0.35 ± 0.02 M⊙ and 0.62-0.04+0.05 M⊙, respectively. Including the re-detection and confirmation of previously known companions in 13 other systems, we derived a multiplicity fraction of 55.4-9.4+5.9%. For the representative sub-sample of 40 hot Jupiter host stars among our targets, the derived multiplicity rate is 54.8-9.9+6.3%. Our data do not confirm any trend that systems with eccentric planetary companions are preferably part of multiple systems. On average, we reached a magnitude contrast of 8.5 ± 0.9 mag at an angular separation of 0.''5. This allows us to exclude additional stellar companions with masses higher than 0.08M⊙ for almost all observed systems; around the closest and youngest systems, this sensitivity is achieved at physical separations as small as 10 au.
Conclusions: Our study shows that SPHERE is an ideal instrument for detecting and characterising close companions to exoplanetary host stars. Although the second data release of the Gaia mission also provides useful constraints for some of the systems, the achieved sensitivity provided by the current data release of this mission is not good enough to measure parallaxes and proper motions for all detected candidates. For 14 identified companion candidates further astrometric epochs are required to confirm their common proper motion at 5σ significance.

Astrometry and photometry of the identified candidate companions are available at the CDS via anonymous ftp to http://cdsarc.u-strasbg.fr (ftp://130.79.128.5) or via http://cdsarc.u-strasbg.fr/viz-bin/cat/J/A+A/635/A73 Based on observations collected at the European Organisation for Astronomical Research in the Southern Hemisphere under ESO programmes 098.C-0589(A) and 099.C-0155(A). 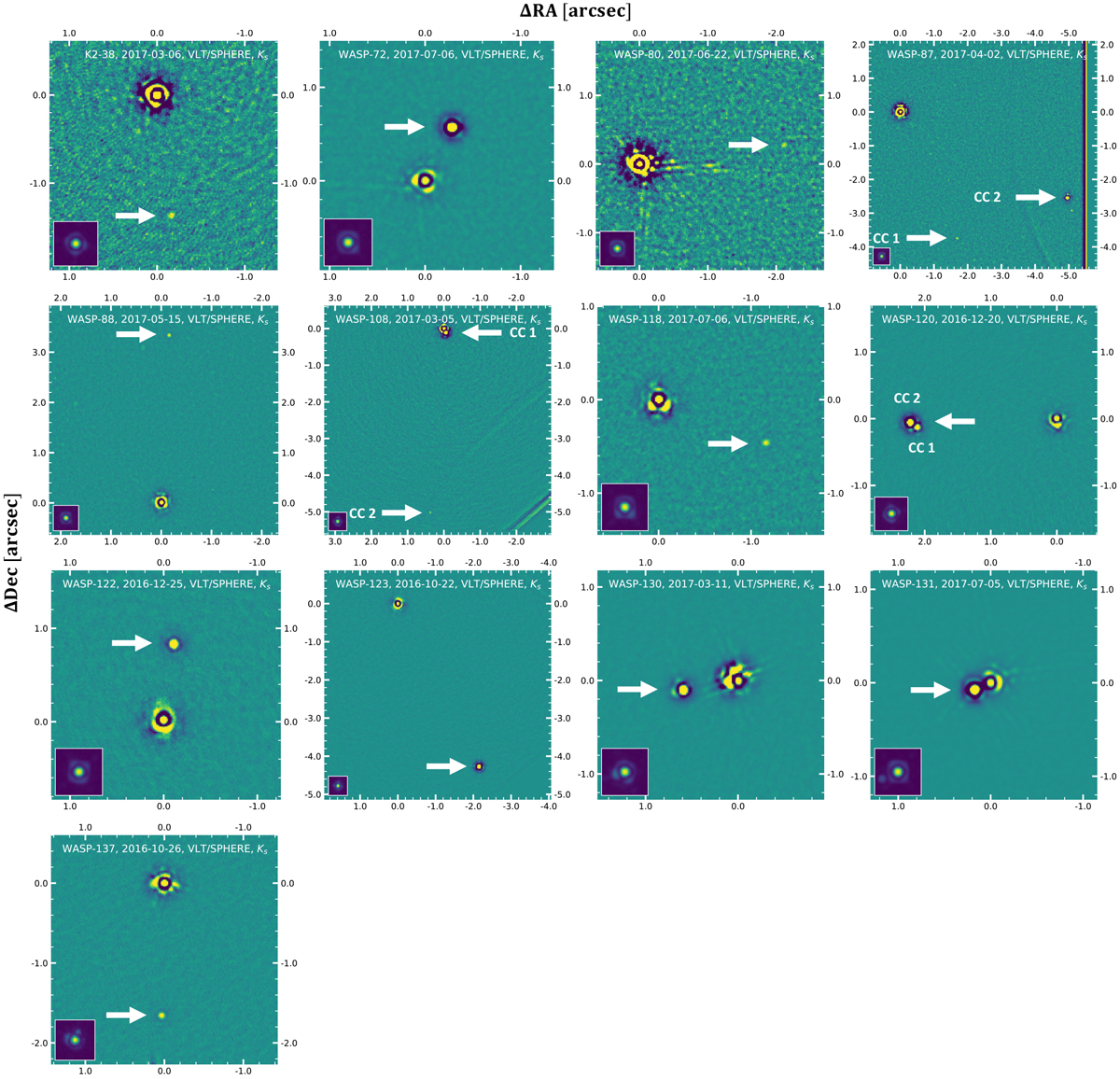