Context. It is more and more suspected that R Coronae Borealis (RCB) stars - rare hydrogen-deficient and carbon-rich supergiant stars - are the products of mergers of CO/He white-dwarf binary systems in the intermediate mass regime (0.6 < MTot < 1.2 M⊙). Following the merger, a short-lived cool supergiant phase starts. RCB stars are extremely rare as only 77 have hitherto been known in the Galaxy, while up to 1000 have been predicted from population synthesis models.
Aims: The goal is to significantly increase the number of known RCB stars in order to better understand their evolutionary paths, their spatial distribution, and their formation rate in the context of population synthesis results. A list of 2356 RCB star candidates was selected using infrared colours from the all-sky 2MASS and WISE surveys. The objective is to follow them up spectroscopically to classify the candidates and, thus, to distinguish RCB stars from other dust-producing stars.
Methods: A series of brightness and colour-colour cuts that were used as selection criteria were then tested using the sample of known Galactic and Magellanic RCB stars. RCB spectral energy distribution models were also used to understand the effects of each selection criterion in terms of circumstellar shell temperature. Optical, low-resolution spectra were obtained for nearly 500 of the candidate stars. These spectra were compared to synthetic spectra from a new grid of MARCs hydrogen-deficient atmospheric models. This allowed us to define a spectroscopic classification system for RCB stars depending on their effective temperature and photometric status.
Results: This programme has found 45 new RCB stars, including 30 Cold (4000 < Teff < 6800 K), 14 Warm (6800 < Teff < 8500 K), and one Hot (Teff > 15 000 K). Forty of these belong to the Milky Way and five are located in the Magellanic Clouds. We also confirmed that the candidate KDM 5651 is indeed a new RCB star, increasing the total number of Magellanic RCB stars to 30.
Conclusions: We increased the total number of RCB stars known by ∼50%, bringing it up to 147. In addition, we compiled a list of 14 strong RCB candidates, most certainly observed during a dust obscuration phase. From the detection efficiency and success rate so far, we estimate that there should be no more than 500 RCB stars existing in the Milky Way, all HdC stars included. 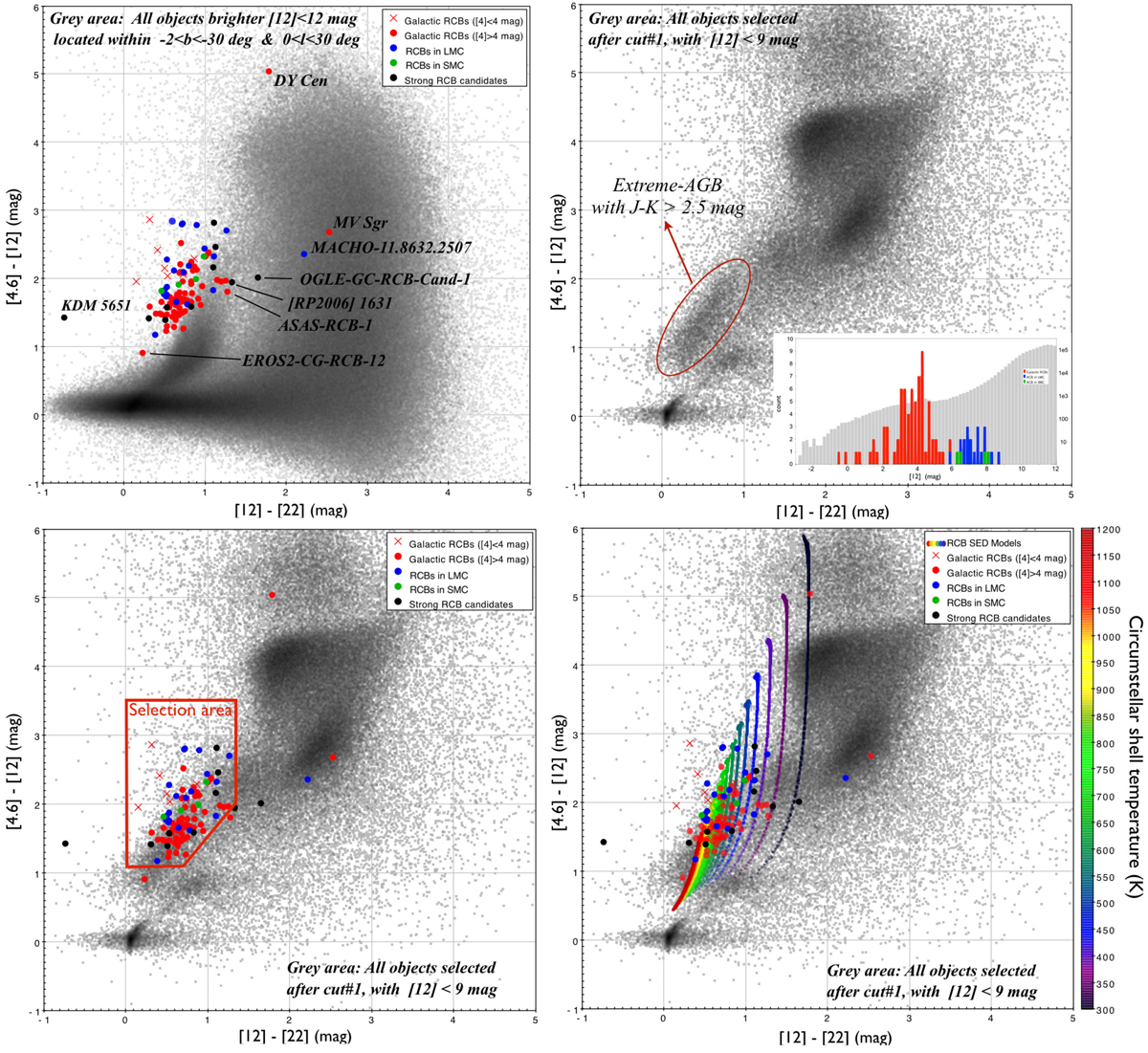