The MUSE view of the planetary nebula NGC 3132


Aims: Two-dimensional spectroscopic data for the whole extent of the NGC 3132 planetary nebula have been obtained. We deliver a reduced data-cube and high-quality maps on a spaxel-by-spaxel basis for the many emission lines falling within the Multi-Unit Spectroscopic Explorer (MUSE) spectral coverage over a range in surface brightness >1000. Physical diagnostics derived from the emission line images, opening up a variety of scientific applications, are discussed.
Methods: Data were obtained during MUSE commissioning on the European Southern Observatory (ESO) Very Large Telescope and reduced with the standard ESO pipeline. Emission lines were fitted by Gaussian profiles. The dust extinction, electron densities, and temperatures of the ionised gas and abundances were determined using Python and PyNeb routines.
Results: The delivered datacube has a spatial size of ~63''× 123'', corresponding to ~0.26 × 0.51 pc2 for the adopted distance, and a contiguous wavelength coverage of 4750-9300 Å at a spectral sampling of 1.25 Å pix-1. The nebula presents a complex reddening structure with high values (c(Hβ) ~ 0.4) at the rim. Density maps are compatible with an inner high-ionisation plasma at moderate high density (~1000 cm-3), while the low-ionisation plasma presents a structure in density peaking at the rim with values ~700 cm-3. Median Te, using different diagnostics, decreases according to the sequence [N II], [S II] →[S III] → [O I] → He I → Paschen Jump. Likewise, the range of temperatures covered by recombination lines is much larger than those obtained from collisionally excited lines (CELs), with large spatial variations within the nebula. If these differences were due to the existence of high density clumps, as previously suggested, these spatial variations would suggest changes in the properties and/or distribution of the clumps within the nebula. We determined a median helium abundance He/H = 0.124, with slightly higher values at the rim and outer shell. The range of measured ionic abundances for light elements are compatible with literature values. Our kinematic analysis nicely illustrates the power of 2D kinematic information in many emission lines, which sheds light on the intrinsic structure of the nebula. Specifically, our derived velocity maps support a geometry for the nebula that is similar to the diabolo-like model previously proposed, but oriented with its major axis roughly at PA ~ -22°. We identified two low-surface brightness arc-like structures towards the northern and southern tips of the nebula, with high extinction, high helium abundance, and strong low-ionisation emission lines. They are spatially coincident with some extended low-surface brightness mid-infrared emission. The characteristics of the features suggest that they could be the consequence of precessing jets caused by the binary star system. A simple 1D Cloudy model is able to reproduce the strong lines in the integrated spectrum of the whole nebula with an accuracy of ~15%.
Conclusions: Together with similar work with MUSE on NGC 7009, the present study illustrates the enormous potential of wide field integral field spectrographs for the study of Galactic planetary nebulae. 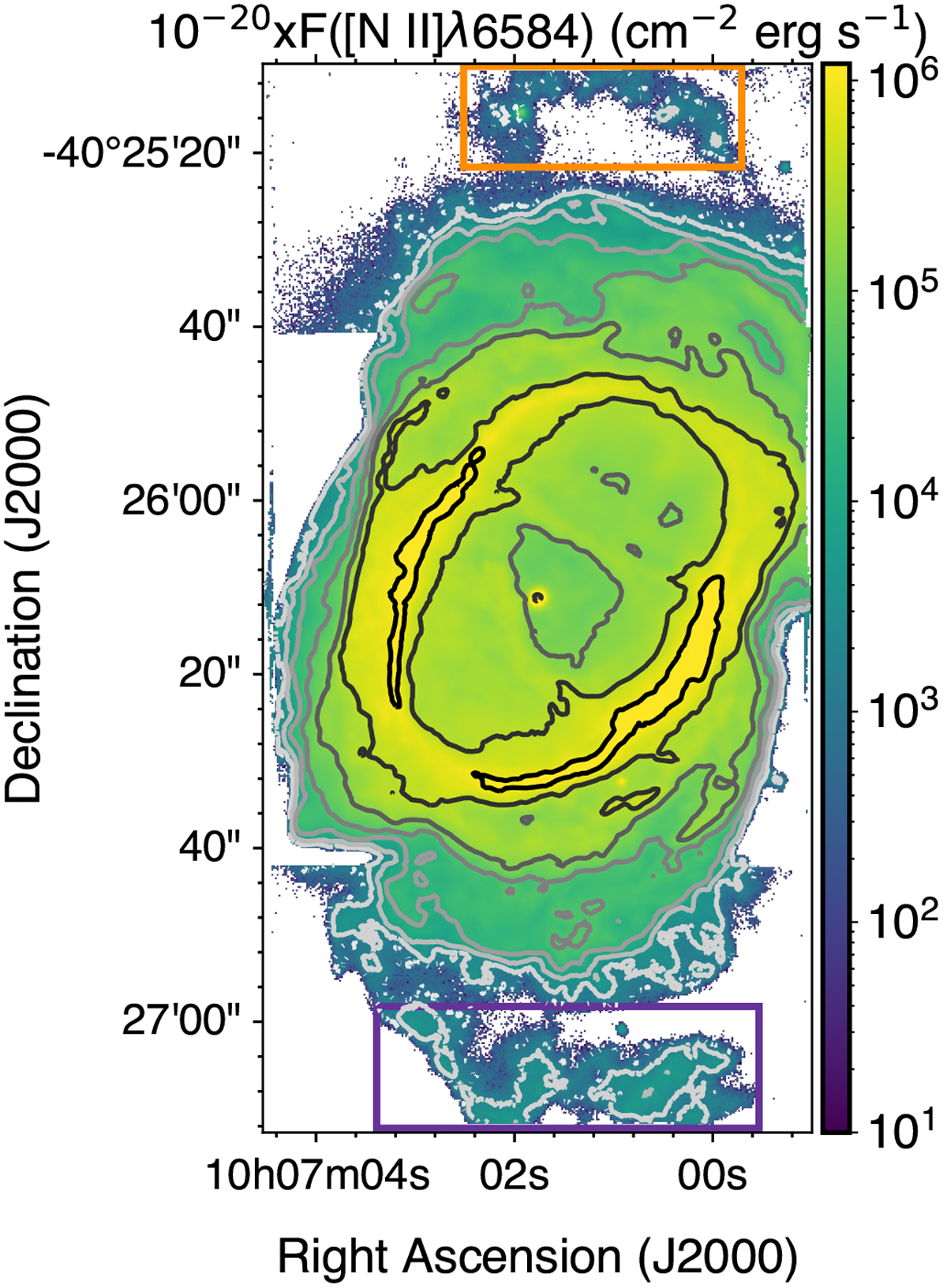