For precision cosmological studies it is important to know the local properties of the reference point from which we observe the Universe. Particularly for the determination of the Hubble constant with low-redshift distance indicators, the values observed depend on the average matter density within the distance range covered. In this study we used the spatial distribution of galaxy clusters to map the matter density distribution in the local Universe. The study is based on our CLASSIX galaxy cluster survey, which is highly complete and well characterised, where galaxy clusters are detected by their X-ray emission. In total, 1653 galaxy clusters outside the "zone of avoidance" fulfil the selection criteria and are involved in this study. We find a local underdensity in the cluster distribution of about 30-60% which extends about 85 Mpc to the north and ∼170 Mpc to the south. We study the density distribution as a function of redshift in detail in several regions in the sky. For three regions for which the galaxy density distribution has previously been studied, we find good agreement between the density distribution of clusters and galaxies. Correcting for the bias in the cluster distribution we infer an underdensity in the matter distribution of about -30 ± 15% (-20 ± 10%) in a region with a radius of about 100 (∼140) Mpc. Calculating the probability of finding such an underdensity through structure formation theory in a ΛCDM universe with concordance cosmological parameters, we find a probability characterised by σ-values of 1.3 - 3.7. This indicates low probabilities, but with values of around 10% at the lower uncertainty limit, the existence of an underdensity cannot be ruled out. Inside this underdensity, the observed Hubble parameter will be larger by about 5.5 +2.1-2.8%, which explains part of the discrepancy between the locally measured value of H0 compared to the value of the Hubble parameter inferred from the Planck observations of cosmic microwave background anisotropies. If distance indicators outside the local underdensity are included, as in many modern analyses, this effect is diluted.

Based on observations at the European Southern Observatory La Silla, Chile and the German-Spanish Observatory at Calar Alto. 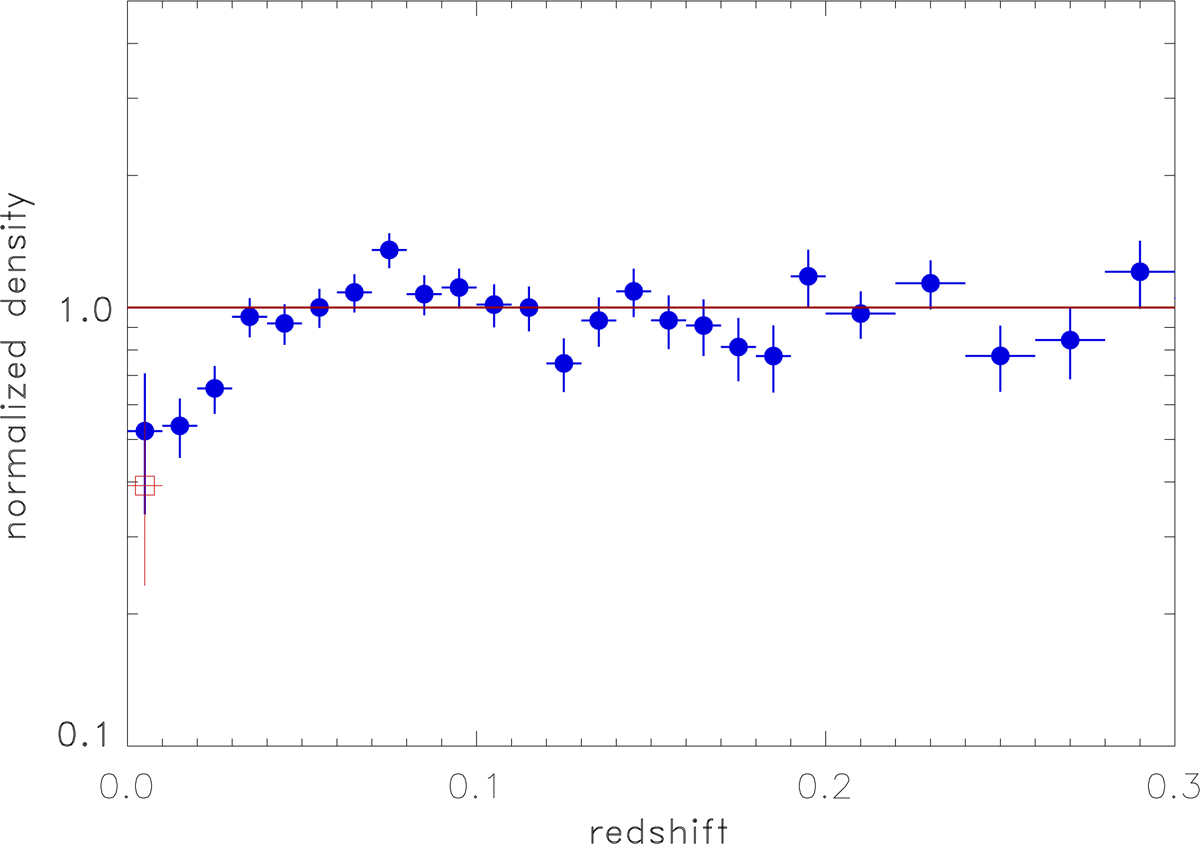