Context. We investigate small-scale light variations in V646 Pup occurring on timescales of days, weeks, and years.
Aims: We aim to investigate whether this variability is similar to that observed in FU Ori.
Methods: We observed V646 Pup on six occasions at the SAAO and CTIO between 2013 and 2018 with Johnson and Sloan filters, typically using a one-day cadence maintained for two to four weeks. We also utilised the public-domain 1512-day-long ASAS-SN light curve and TESS photometry obtained in 2019 over 24.1 days with a 30 min cadence. New SAAO low-resolution spectra assist in updating major disc parameters, while the archival high-resolution Keck spectra are used to search for temporal changes in the disc rotational profiles.
Results: The ground-based observations confirm the constantly decreasing brightness of V646 Pup at the rate of 0.018 mag yr-1. Precise i-band sensitive TESS data show that the slight, 0.005-0.01 mag, light variations imposed on this general trend do consist of a few independent wave trains of an apparently time-coherent nature. Assuming that this is typical situation, based on an analysis of colour-magnitude diagrams obtained for earlier epochs, we were able to make a preliminarily inference that the bulk of the light changes observed could be due to the rotation of disc photosphere inhomogeneities, arising between 10-12 R⊙ from the star. We do not exclude the possibility that these inhomogeneities could also manifest themselves in the rotational profiles of the disc, as obtained from the high-resolution spectra. Assuming Keplerian rotation of these inhomogeneities, we give a preliminary determination of the stellar mass at 0.7-0.9 M⊙.
Conclusions: Over certain weeks, at least, V646 Pup has shown time-coherent light variability pattern(s) that could be explained by the rotation of an inhomogeneous disc photosphere. These preliminary results are similar to those better established for FU Ori, which suggests a common driving mechanism(s). 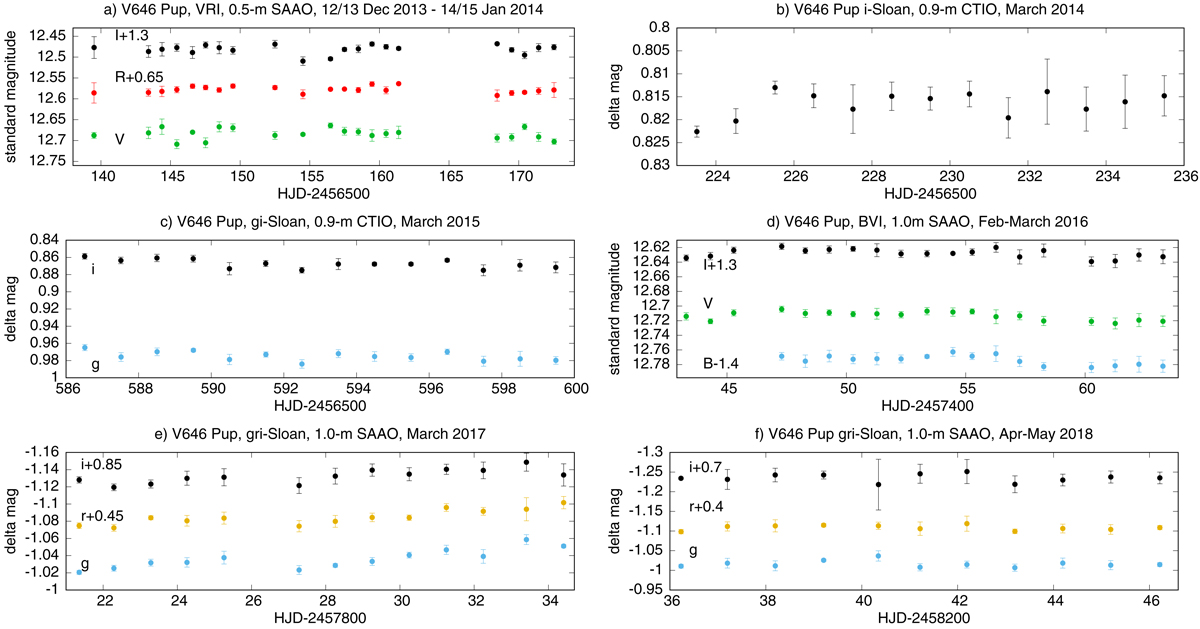