Context. We study the spatially resolved properties of 343 elliptical galaxies with the Mapping Nearby Galaxies at the Apache Point Observatory (MaNGA) survey.
Aims: Our goal is to understand the fundamental processes of formation and quenching of elliptical galaxies.
Methods: We used the DESI Legacy Imaging Surveys for accurate morphological classification. Based on integrated spectroscopic properties and colors, we classified seven classes of elliptical galaxies. We inferred the stellar age and metallicity gradients out to a 1.5 effective radius (Reff) of classical "red and dead", recently quenched, and blue star-forming ellipticals (CLEs, RQEs, and BSFs), corresponding to 73%, 10%, and 4% of the sample, respectively. Additionally, we reconstructed their global and radial histories of star formation and mass growth.
Results: The mass- and luminosity-weighted age gradients of CLEs are nearly flat or mildly negative, with small differences between both ages. The respective metallicity gradients are negative (∇log[Zmw] = -0.11-0.08+0.07 dex/Reff and ∇log[Zlw] = -0.11-0.07+0.06 dex/Reff, respectively), being flatter as the mass is smaller. The more massive CLEs formed stars earlier and quenched faster than the less massive ones. The CLEs show a weak inside-out growth and a clear inside-out quenching. They finished their quenching globally 3.8 ± 1.2 Gyr ago on average, with quenching time-scales of 3.4 ± 0.8 Gyr. At M⋆ < 1011 M⊙, the age and Z gradients of the RQEs and BSFs are flatter than those of the CLEs, but with larger scatters. They show very weak inside-out growth and quenching, which is slow and not even completed at z ∼ 0 for the BSFs. Instead, the massive RQEs show an outside-in quenching and positive gradients in the luminosity-weighted age and stellar metallicities. The RQEs of all masses quenched 1.2 ± 0.9 Gyr ago on average.
Conclusions: Our results for the CLEs are consistent with a two-phase scenario where their inner parts formed by an early and coeval dissipative collapse with a consequent burst of star formation and further quenching, whereas the outer parts continued their assembly, likely by dry mergers. We also discuss some evolutionary scenarios for the RQE and BSF galaxies that would agree with the generic results. 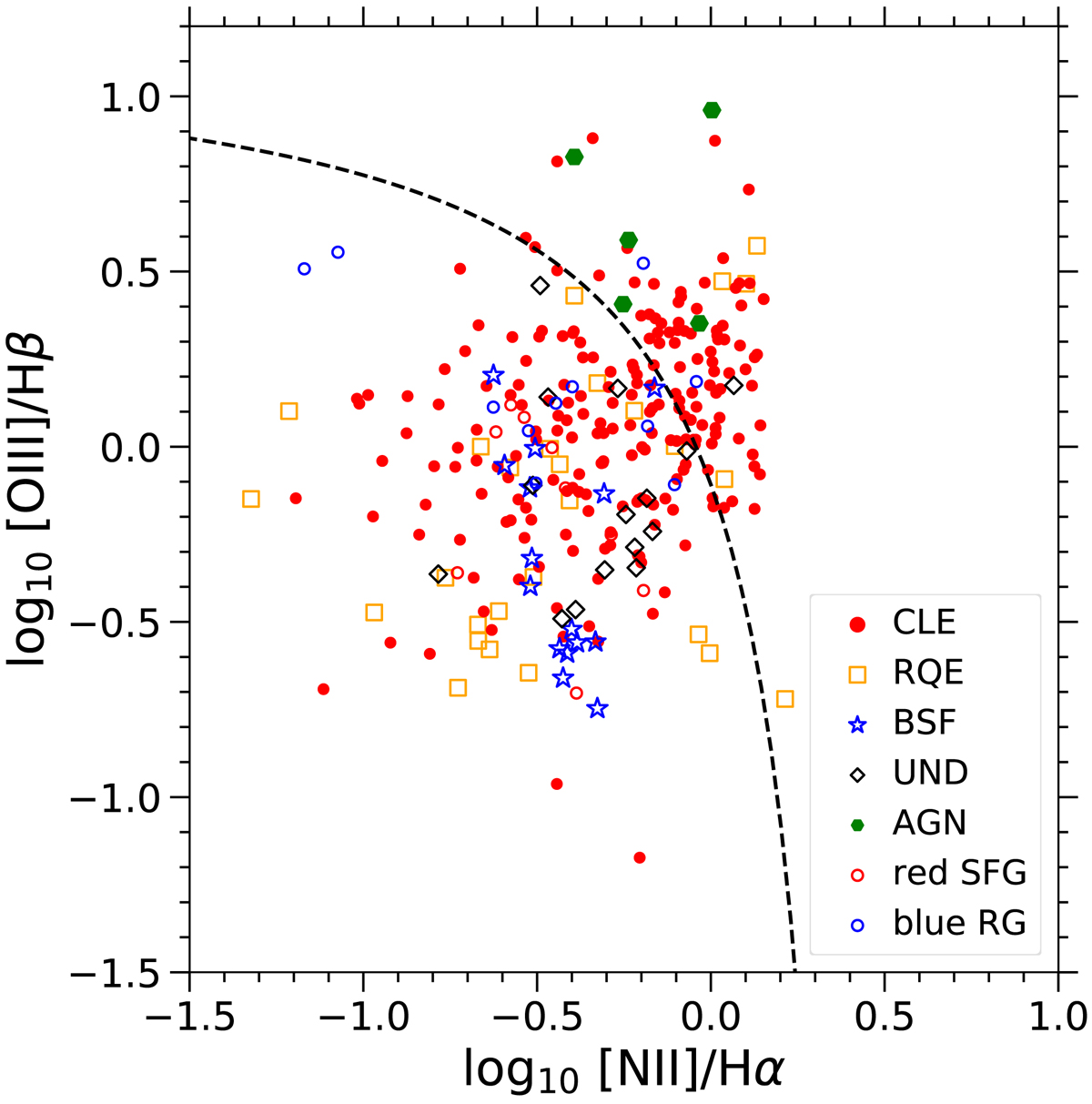