In the past decade, the observations of diffuse radio synchrotron emission toward galaxy clusters revealed cosmic-ray (CR) electrons and magnetic fields on megaparsec scales. However, their origin remains poorly understood to date, and several models have been discussed in the literature. CR protons are also expected to accumulate during the formation of clusters and probably contribute to the production of these high-energy electrons. In order to understand the physics of CRs in clusters, combining of observations at various wavelengths is particularly relevant. The exploitation of such data requires using a self-consistent approach including both the thermal and the nonthermal components, so that it is capable of predicting observables associated with the multiwavelength probes at play, in particular in the radio, millimeter, X-ray, and γ-ray bands. We develop and describe such a self-consistent modeling framework, called MINOT (modeling the intracluster medium (non-)thermal content and observable prediction tools) and make this tool available to the community. MINOT models the intracluster diffuse components of a cluster (thermal and nonthermal) as spherically symmetric. It therefore focuses on CRs associated with radio halos. The spectral properties of the cluster CRs are also modeled using various possible approaches. All the thermodynamic properties of a cluster can be computed self-consistently, and the particle physics interactions at play are processed using a framework based on the Naima software. The multiwavelength observables (spectra, profiles, flux, and images) are computed based on the relevant physical process, according to the cluster location (sky and redshift), and based on the sampling defined by the user. With a standard personal computer, the computing time for most cases is far shorter than one second and it can reach about one second for the most complex models. This makes MINOT suitable for instance for Monte Carlo analyses. We describe the implementation of MINOT and how to use it. We also discuss the different assumptions and approximations that are involved and provide various examples regarding the production of output products at different wavelengths. As an illustration, we model the clusters Abell 1795, Abell 2142, and Abell 2255 and compare the MINOT predictions to literature data. While MINOT was originally build to simulate and model data in the γ-ray band, it can be used to model the cluster thermal and nonthermal physical processes for a wide variety of datasets in the radio, millimeter, X-ray, and γ-ray bands, as well as the neutrino emission. 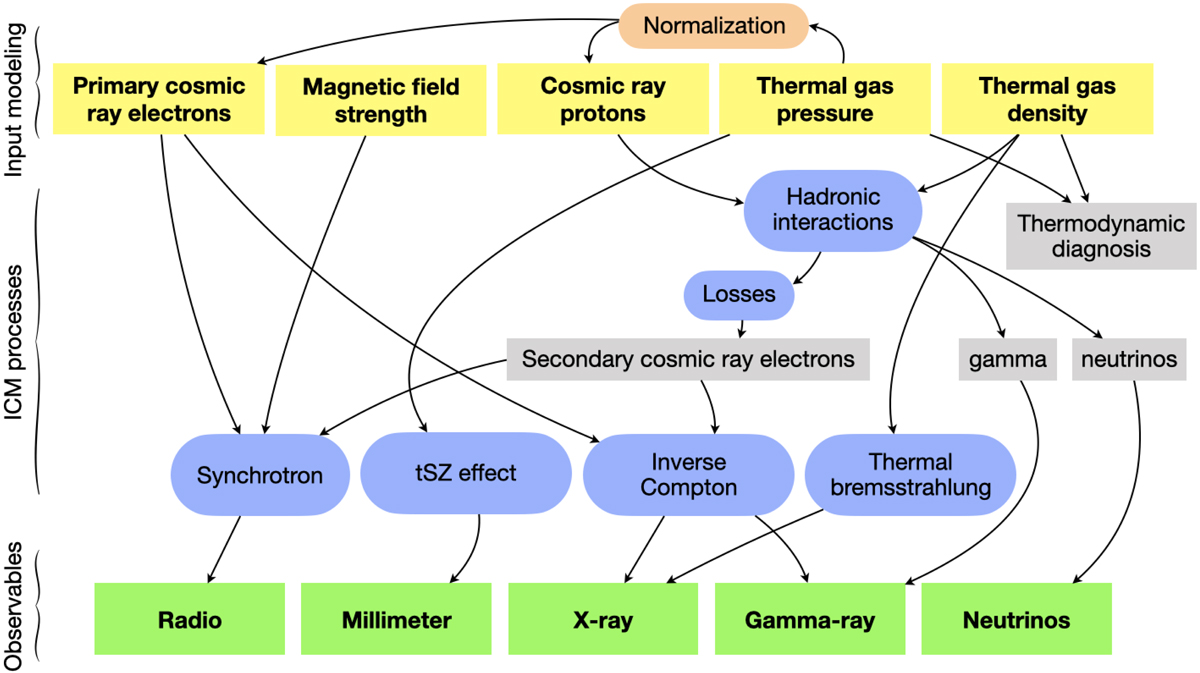