Context. The nitrogen isotopic ratio is considered an important diagnostic tool of the star formation process, and N2H+ is particularly important because it is directly linked to molecular nitrogen N2. However, theoretical models still do not provide an exhaustive explanation for the observed 14N/15N values.
Aims: Recent theoretical works suggest that the 14N/15N behaviour is dominated by two competing reactions that destroy N2H+: dissociative recombination and reaction with CO. When CO is depleted from the gas phase, if the N2H+ recombination rate is lower with respect to that for N15NH+, the rarer isotopologue is destroyed more quickly. In prestellar cores, due to a combination of low temperatures and high densities, most CO is frozen in ices onto the dust grains, leading to high levels of depletion. On the contrary, in protostellar cores, where temperature are higher, CO ices evaporate back to the gas phase. This implies that the N2H+ isotopic ratio in protostellar cores should be lower than that in prestellar cores, and consistent with the elemental value of ≈440. We aim to test this hypothesis, producing the first sample of N2H+/N15NH+ measurements in low-mass protostars.
Methods: We observe the N2H+ and N15NH+ lowest rotational transition towards six young stellar objects in the Perseus and Taurus molecular clouds. We model the spectra with a custom python code using a constant Tex approach to fit the observations. We discuss in the Appendix the validity of this hypothesis. The derived column densities are used to compute the nitrogen isotopic ratios.
Results: Our analysis yields an average of 14N/15N|pro = 420 ± 15 in the protostellar sample. This is consistent with the protosolar value of 440, and significantly lower than the average value previously obtained in a sample of prestellar objects.
Conclusions: Our results are in agreement with the hypothesis that, when CO is depleted from the gas-phase, dissociative recombinations with free electrons destroy N15NH+ faster than N2H+, leading to high isotopic ratios in prestellar cores where carbon monoxide is frozen onto dust grains. 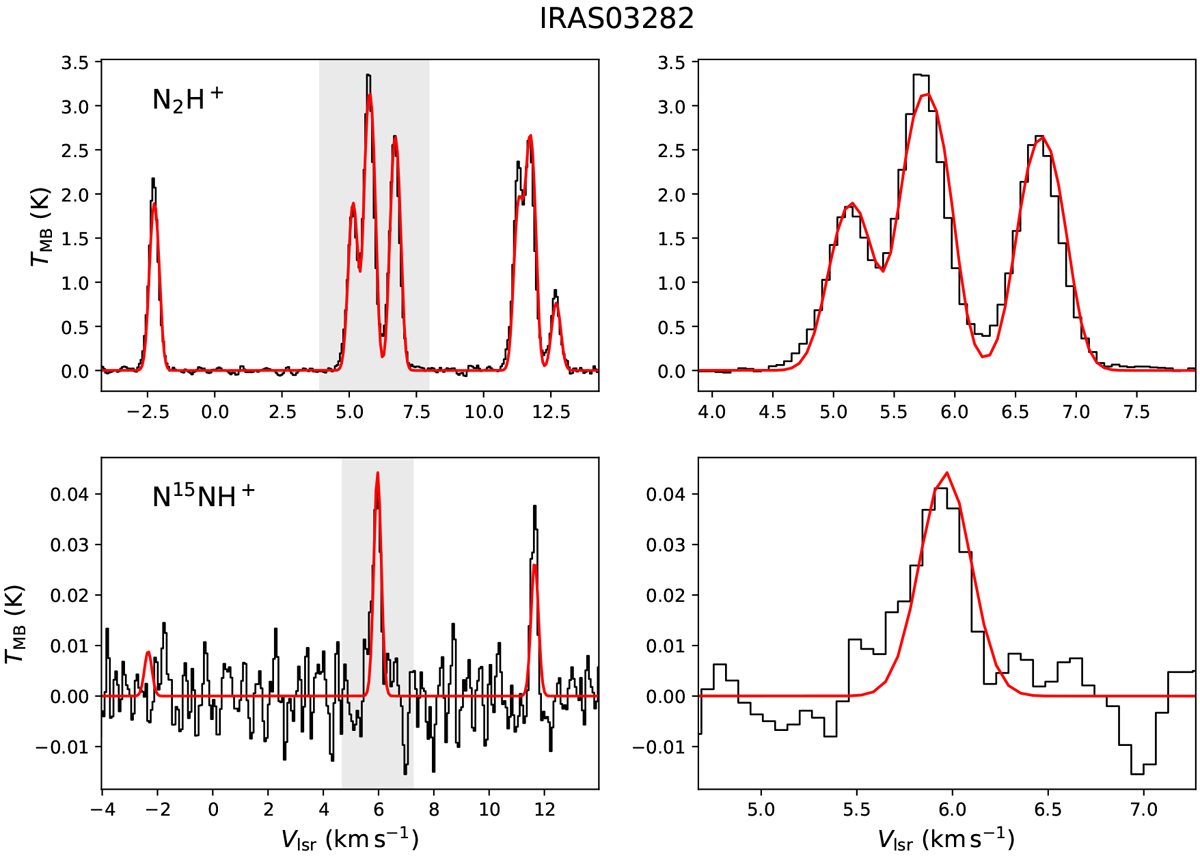