Tracing the total molecular gas in galaxies: [CII] and the CO-dark gas

Context. Molecular gas is a necessary fuel for star formation. The CO (1-0) transition is often used to deduce the total molecular hydrogen but is challenging to detect in low-metallicity galaxies in spite of the star formation taking place. In contrast, the [C II]λ158 μm is relatively bright, highlighting a potentially important reservoir of H2 that is not traced by CO (1-0) but is residing in the C+-emitting regions.
Aims: Here we aim to explore a method to quantify the total H2 mass (MH2) in galaxies and to decipher what parameters control the CO-dark reservoir.
Methods: We present Cloudy grids of density, radiation field, and metallicity in terms of observed quantities, such as [O I], [C I], CO (1-0), [C II], LTIR, and the total MH2. We provide recipes based on these models to derive total MH2 mass estimates from observations. We apply the models to the Herschel Dwarf Galaxy Survey, extracting the total MH2 for each galaxy, and compare this to the H2 determined from the observed CO (1-0) line. This allows us to quantify the reservoir of H2 that is CO-dark and traced by the [C II]λ158 μm.
Results: We demonstrate that while the H2 traced by CO (1-0) can be negligible, the [C II]λ158 μm can trace the total H2. We find 70 to 100% of the total H2 mass is not traced by CO (1-0) in the dwarf galaxies, but is well-traced by [C II]λ158 μm. The CO-dark gas mass fraction correlates with the observed L[C II]/LCO(1-0) ratio. A conversion factor for [C II]λ158 μm to total H2 and a new CO-to-total-MH2 conversion factor as a function of metallicity are presented.
Conclusions: While low-metallicity galaxies may have a feeble molecular reservoir as surmised from CO observations, the presence of an important reservoir of molecular gas that is not detected by CO can exist. We suggest a general recipe to quantify the total mass of H2 in galaxies, taking into account the CO and [C II] observations. Accounting for this CO-dark H2 gas, we find that the star-forming dwarf galaxies now fall on the Schmidt-Kennicutt relation. Their star-forming efficiency is rather normal because the reservoir from which they form stars is now more massive when introducing the [C II] measures of the total H2 compared to the small amount of H2 in the CO-emitting region. 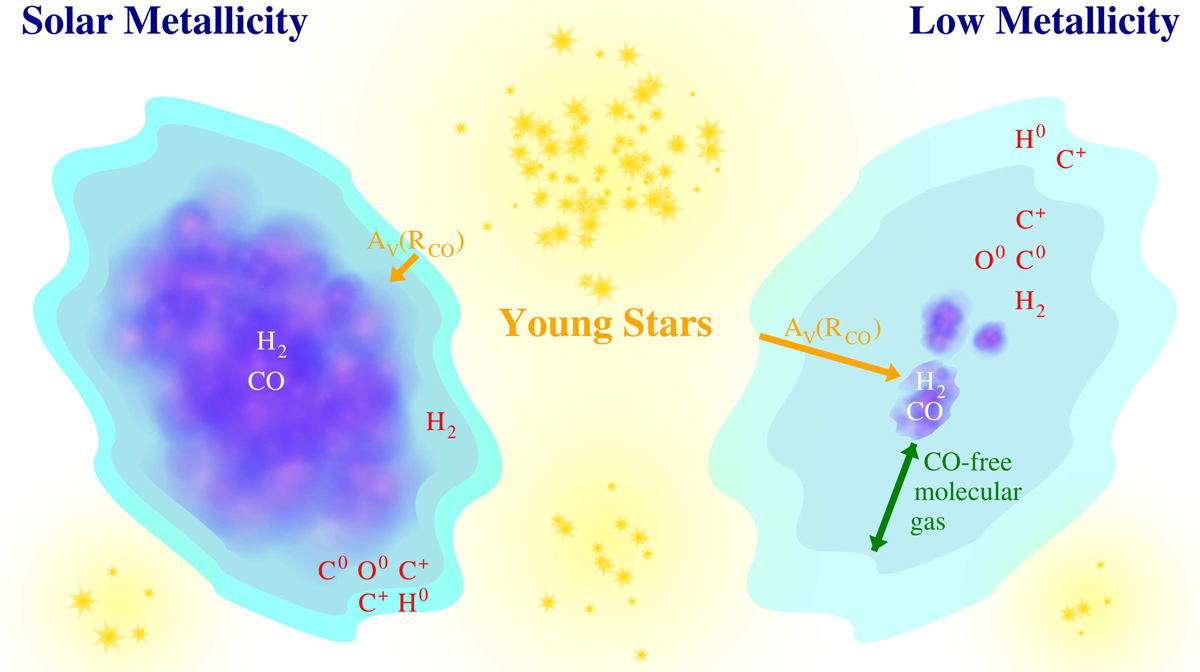