Context. The process of mass accretion in the earliest phases of star formation is still not fully understood: does the accretion rate smoothly decline with the age of the protostar or are there short, intermittent accretion bursts? The latter option would also yield the possibility for very low-luminosity objects (VeLLOs) to be precursors of solar-type stars, even though they do not seem to have sufficiently high accretion rates to reach stellar masses during their protostellar lifetime. Nevertheless, probing such intermittent events in the deeply embedded phase is not easy. Chemical signatures in the protostellar envelope can trace a past accretion burst.
Aims: We aim to explore whether or not the observed C18O and N2H+ emission pattern towards the VeLLO IRAM 04191+1522 can be understood in the framework of a scenario where the emission is chemically tracing a past accretion burst.
Methods: We used high-angular-resolution Plateau de Bure Interferometer (PdBI) observations of C18O and N2H+ towards IRAM 04191+1522 that were obtained as part of the CALYPSO IRAM Large Program (Continuum And Lines in Young ProtoStellar Objects). We model these observations using a chemical code with a time-dependent physical structure coupled with a radiative transfer module, where we allow for variations in the source luminosity.
Results: We find that the N2H+ line emission shows a central hole, with the N2H+ emission peaking at a radius of about 10'' (1400 au) from the source, while the C18O emission is compact (1.3'' FWHM, corresponding to 182 au). The morphology of these two lines cannot be reproduced with a constant luminosity model based on the present-day internal luminosity (0.08 L⊙). However, the N2H+ peaks are consistent with a constant-luminosity model of 12 L⊙. Using a model with time-dependent temperature and density profiles, we show that the observed N2H+ peak emission could indeed be caused by a past accretion burst with a luminosity 150 times higher than the present-day luminosity. Such a burst should have occurred a couple of hundred years ago.
Conclusions: We suggest that an accretion burst occurred in IRAM 04191+1522 in the recent past. If such bursts are common and sufficiently long in VeLLOs, they could lead to higher accretion onto the central object than their luminosity suggests. For IRAM 04191 in particular, our results yield an estimated final mass of 0.2-0.25 M⊙ by the end of the Class 0 phase, which would make this object a low-mass star rather than a brown dwarf. More generally, our analysis demonstrates that the combination of observations of N2H+ and C18O is a more reliable diagnostic of past outburst activity than C18O or N2H+ emission alone. 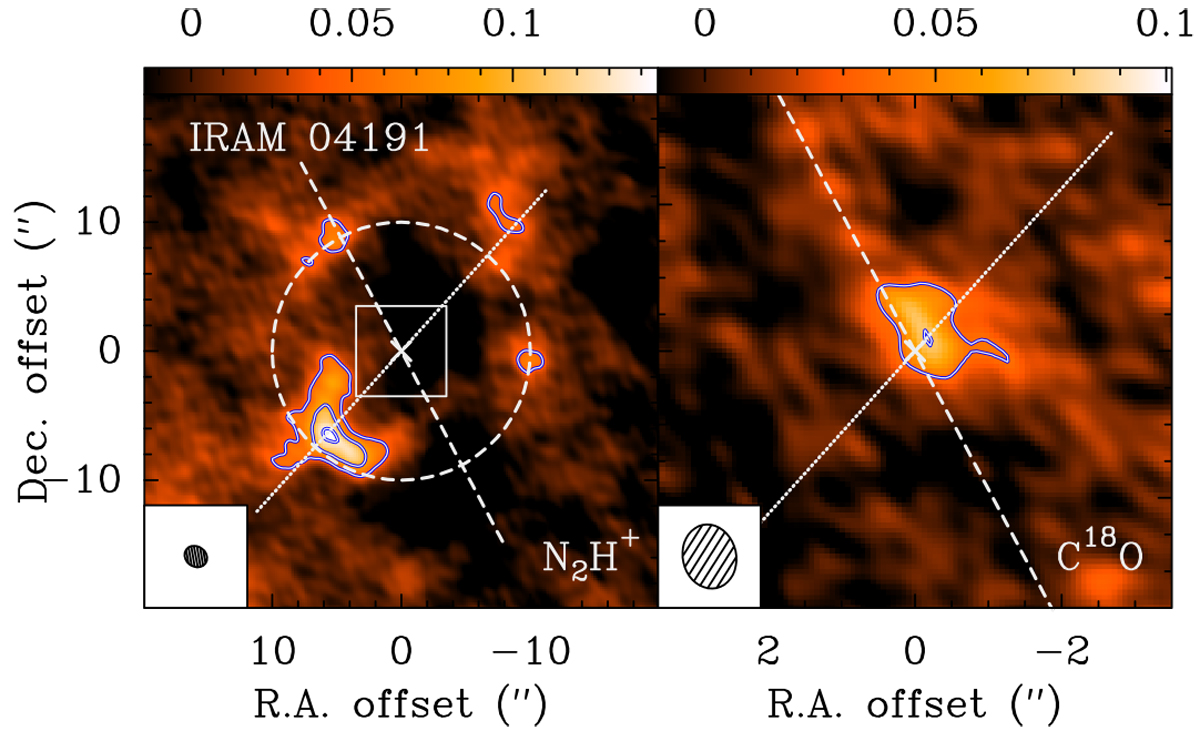