Dust and gas in the central region of NGC 1316 (Fornax A). Its origin and nature

Context. The early-type galaxy NGC 1316, associated with the radio source Fornax A, hosts about 107 M⊙ of dust within a central radius of 5 kpc. These prominent dust structures are believed to have an external origin, which is also a popular interpretation for other dusty early-type galaxies. Moreover, it has been long known that ionised gas is present in NGC 1316, but to date there has been a lack of detailed investigation.
Aims: Our aim is to understand the nature of ionised gas and dust in NGC 1316 and to offer an interpretation for the origin of the dust.
Methods: We use archival Hubble Space Telescope/Advanced Camera for Surveys data to construct colour maps that delineate the dust pattern in detail, and we compare these data with maps constructed with data from the Multi Unit Spectroscopic Explorer (MUSE) instrument of the Very Large Telescope at the European Southern Observatory. Twelve MUSE pointings in wide field mode form a mosaic of the central 3.3 × 2.4 arcmin2. We use the tool PyParadise to fit the stellar population. We use the residual emission lines and the residual interstellar absorption NaI D-lines, and we measure line strengths, the velocity field, and the velocity dispersion field.
Results: The emission lines resemble low-ionisation nuclear emission-line region lines, with [NII] being the strongest line everywhere. Ionising sources are plausibly the post-asymptotic giant branch stars of the old or intermediate-age stellar population. There is a striking match between the dust structures, ionised gas, and atomic gas distributions, the last of which is manifested by interstellar absorption residuals of the stellar NaI D-lines. In the dust-free regions, the interstellar NaI D-lines appear in emission, which is indicative of a galactic wind. The velocity field of the ionised gas (and thus of the dust) is characterised by small-scale turbulent movements that indicate short lifetimes. At the very centre, a bipolar velocity field of the ionised gas is observed, which we interpret as an outflow. The low-velocity part is associated with dust. We identify a strongly inclined gaseous dusty disc along the major axis of NGC 1316. A straight beam of ionised gas with a length of about 4 kpc emanates from the centre.
Conclusions: The dust in NGC 1316 has different origins. Our findings are strongly suggestive of a dusty outflow that is curved along the line-of-sight. Nuclear outflows may be important dust-producing machines in galaxies. Another dusty gaseous component forms a disc that we identify as the predecessor of a central dust lane.

Based on observations taken at the European Southern Observatory, Cerro Paranal, Chile, under the programme 92.B-0289 (PI: J. Walcher). 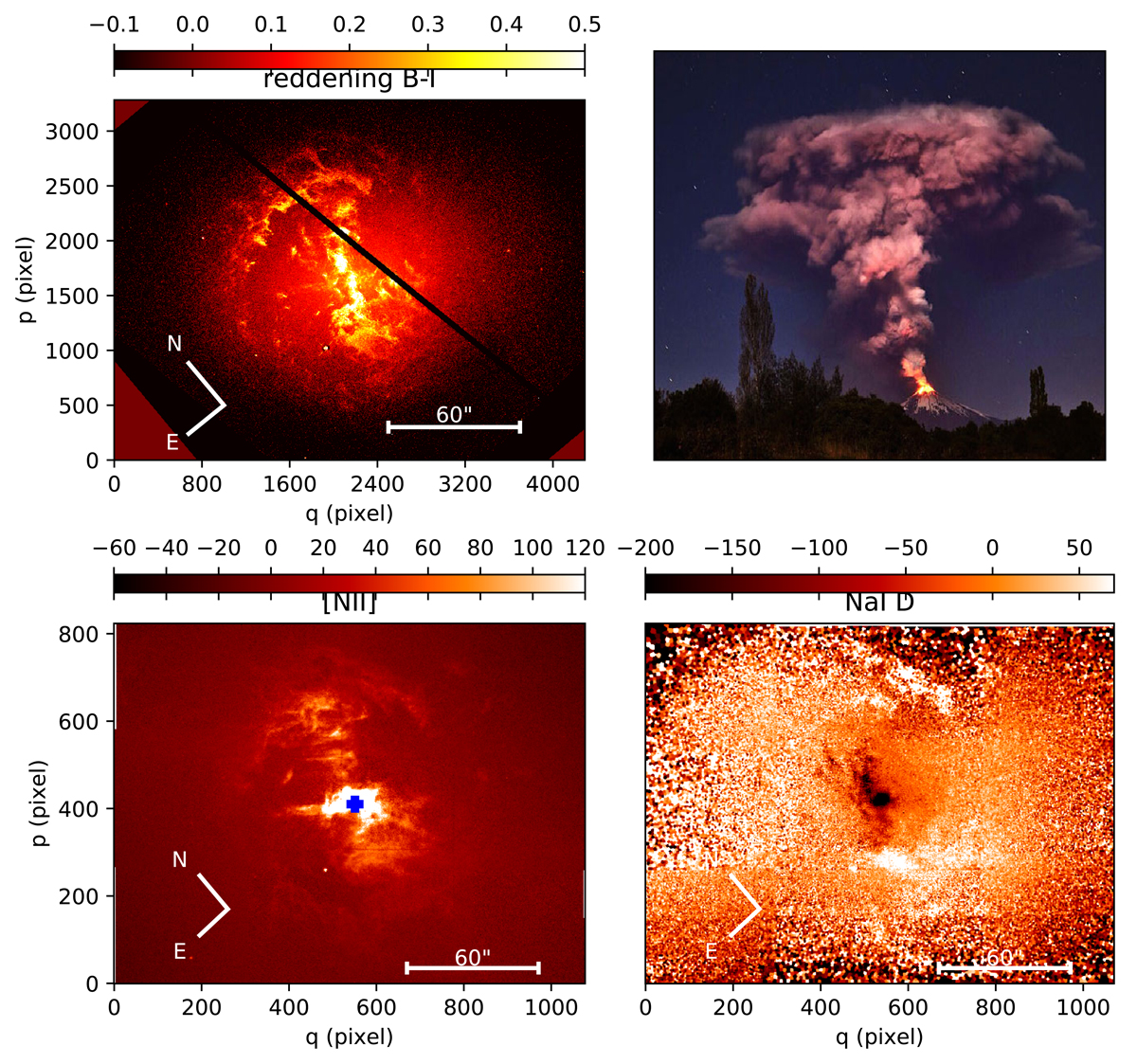