Context. Gravitational wave (GW) astronomy has rapidly reached maturity, becoming a fundamental observing window for modern astrophysics. The coalescences of a few tens of black hole (BH) binaries have been detected, while the number of events possibly including a neutron star (NS) is still limited to a few. On 2019 August 14, the LIGO and Virgo interferometers detected a high-significance event labelled S190814bv. A preliminary analysis of the GW data suggests that the event was likely due to the merger of a compact binary system formed by a BH and a NS.
Aims: In this paper, we present our extensive search campaign aimed at uncovering the potential optical and near infrared electromagnetic counterpart of S190814bv. We found no convincing electromagnetic counterpart in our data. We therefore use our non-detection to place limits on the properties of the putative outflows that could have been produced by the binary during and after the merger.
Methods: Thanks to the three-detector observation of S190814bv, and given the characteristics of the signal, the LIGO and Virgo Collaborations delivered a relatively narrow localisation in low latency - a 50% (90%) credible area of 5 deg2 (23 deg2) - despite the relatively large distance of 267 ± 52 Mpc. ElectromagNetic counterparts of GRAvitational wave sources at the VEry Large Telescope collaboration members carried out an intensive multi-epoch, multi-instrument observational campaign to identify the possible optical and near infrared counterpart of the event. In addition, the ATLAS, GOTO, GRAWITA-VST, Pan-STARRS, and VINROUGE projects also carried out a search on this event. In this paper, we describe the combined observational campaign of these groups.
Results: Our observations allow us to place limits on the presence of any counterpart and discuss the implications for the kilonova (KN), which was possibly generated by this NS-BH merger, and for the strategy of future searches. The typical depth of our wide-field observations, which cover most of the projected sky localisation probability (up to 99.8%, depending on the night and filter considered), is r ∼ 22 (resp. K ∼ 21) in the optical (resp. near infrared). We reach deeper limits in a subset of our galaxy-targeted observations, which cover a total ∼50% of the galaxy-mass-weighted localisation probability. Altogether, our observations allow us to exclude a KN with large ejecta mass M ≳ 0.1 M⊙ to a high (> 90%) confidence, and we can exclude much smaller masses in a sub-sample of our observations. This disfavours the tidal disruption of the neutron star during the merger.
Conclusions: Despite the sensitive instruments involved in the campaign, given the distance of S190814bv, we could not reach sufficiently deep limits to constrain a KN comparable in luminosity to AT 2017gfo on a large fraction of the localisation probability. This suggests that future (likely common) events at a few hundred megaparsecs will be detected only by large facilities with both a high sensitivity and large field of view. Galaxy-targeted observations can reach the needed depth over a relevant portion of the localisation probability with a smaller investment of resources, but the number of galaxies to be targeted in order to get a fairly complete coverage is large, even in the case of a localisation as good as that of this event. 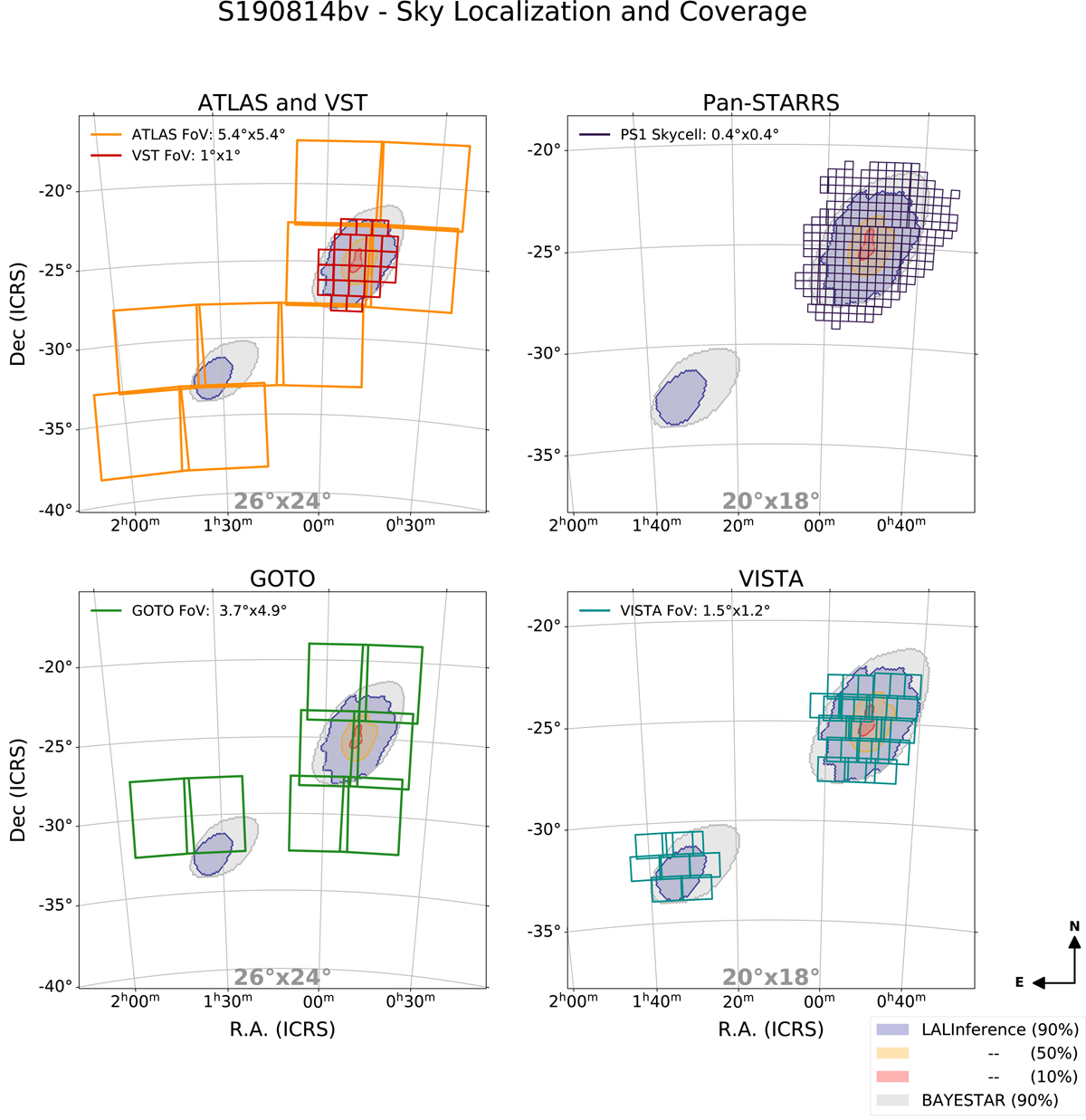