Context. Lyman α blobs (LABs) are large-scale radio-quiet Lyman α (Lyα) nebula at high-z that occur predominantly in overdense proto-cluster regions. In particular, there is the prototypical SSA22a-LAB1 at z = 3.1, which has become an observational reference for LABs across the electromagnetic spectrum.
Aims: We want to understand the powering mechanisms that drive the LAB so that we may gain empirical insights into the galaxy-formation processes within a rare dense environment at high-z. Thus, we need to infer the distribution, the dynamics, and the ionisation state of LAB 1's Lyα emitting gas.
Methods: LAB 1 was observed for 17.2 h with the VLT/MUSE integral-field spectrograph. We produced optimally extracted narrow band images, in Lyαλ1216, He IIλ1640, and we tried to detect C IVλ1549 emission. By utilising a moment-based analysis, we mapped the kinematics and the line profile characteristics of the blob. We also linked the inferences from the line profile analysis to previous results from imaging polarimetry.
Results: We map Lyα emission from the blob down to surface-brightness limits of ≈6 × 10-19 erg s-1 cm-2 arcsec-2. At this depth, we reveal a bridge between LAB 1 and its northern neighbour LAB 8, as well as a shell-like filament towards the south of LAB 1. The complexity and morphology of the Lyα profile vary strongly throughout the blob. Despite the complexity, we find a coherent large-scale east-west velocity gradient of ∼1000 km s-1 that is aligned perpendicular to the major axis of the blob. Moreover, we observe a negative correlation of Lyα polarisation fraction with Lyα line width and a positive correlation with absolute line-of-sight velocity. Finally, we reveal He II emission in three distinct regions within the blob, however, we can only provide upper limits for C IV.
Conclusions: Various gas excitation mechanisms are at play in LAB 1: ionising radiation and feedback effects dominate near the embedded galaxies, while Lyα scattering contributes at larger distances. However, He II/Lyα ratios combined with upper limits on C IV/Lyα are not able to discriminate between active galactic nucleus ionisation and feedback- driven shocks. The alignment of the angular momentum vector parallel to the morphological principal axis appears to be at odds with the predicted norm for high-mass halos, but this most likely reflects that LAB 1 resides at a node of multiple intersecting filaments of the cosmic web. LAB 1 can thus be thought of as a progenitor of a present-day massive elliptical within a galaxy cluster.

The reduced MUSE datacube, the continuum subtracted datacube, and the derived data-products (Lyα narrow-band image, He II narrow-band image, and maps from the moment based analysis) are only available at the CDS via anonymous ftp to http://cdsarc.u-strasbg.fr (ftp://130.79.128.5) or via http://cdsarc.u-strasbg.fr/viz-bin/cat/J/A+A/642/A55 Based on observations made with ESO Telescopes at the La Silla Paranal Observatory under programme ID 094.A-0605, programme ID 095.A-0570, and programme ID 097.A-0831. 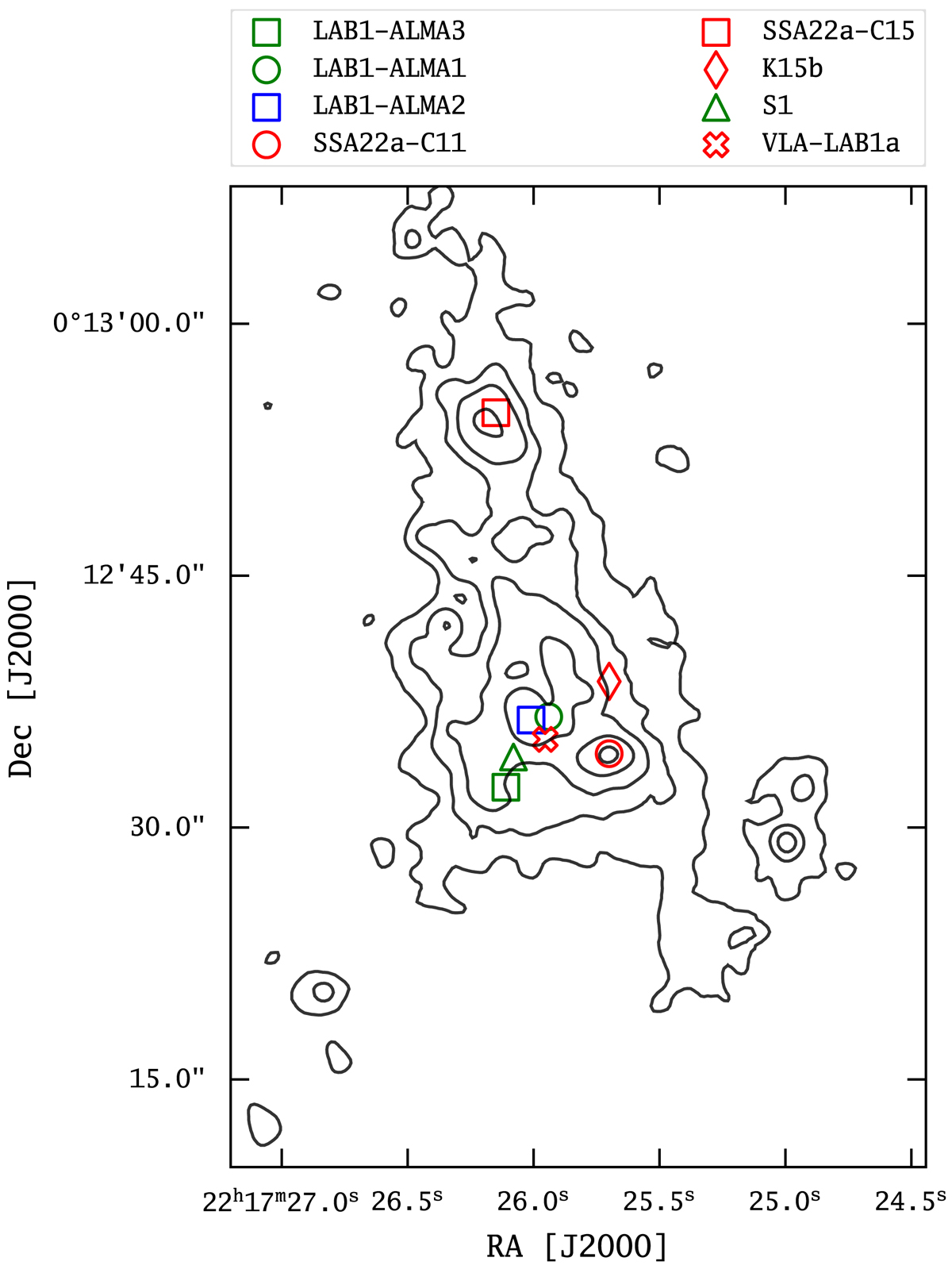