The gas, metal, and dust evolution in low-metallicity local and high-redshift galaxies

Context. The chemical enrichment in the interstellar medium (ISM) of galaxies is regulated by several physical processes: star birth and death, grain formation and destruction, and galactic inflows and outflows. Understanding such processes and their relative importance is essential to following galaxy evolution and the chemical enrichment through the cosmic epochs, and to interpreting current and future observations. Despite the importance of such topics, the contribution of different stellar sources to the chemical enrichment of galaxies, for example massive stars exploding as Type II supernovae (SNe) and low-mass stars, as well as the mechanisms driving the evolution of dust grains, such as for example grain growth in the ISM and destruction by SN shocks, remain controversial from both observational and theoretical viewpoints.
Aims: In this work, we revise the current description of metal and dust evolution in the ISM of local low-metallicity dwarf galaxies and develop a new description of Lyman-break galaxies (LBGs) which are considered to be their high-redshift counterparts in terms of star formation, stellar mass, and metallicity. Our goal is to reproduce the observed properties of such galaxies, in particular (i) the peak in dust mass over total stellar mass (sMdust) observed within a few hundred million years; and (ii) the decrease in sMdust at a later time.
Methods: We fitted spectral energy distribution of dwarf galaxies and LBGs with the "Code Investigating GALaxies Emission", through which the total stellar mass, dust mass, and star formation rate are estimated. For some of the dwarf galaxies considered, the metal and gas content are available from the literature. We computed different prescriptions for metal and dust evolution in these systems (e.g. different initial mass functions for stars, dust condensation fractions, SN destruction, dust accretion in the ISM, and inflow and outflow efficiency), and we fitted the properties of the observed galaxies through the predictions of the models.
Results: Only some combinations of models are able to reproduce the observed trend and simultaneously fit the observed properties of the galaxies considered. In particular, we show that (i) a top-heavy initial mass function that favours the formation of massive stars and a dust condensation fraction for Type II SNe of around 50% or more help to reproduce the peak of sMdust observed after ≈100 Myr from the beginning of the baryon cycle for both dwarf galaxies and LBGs; (ii) galactic outflows play a crucial role in reproducing the observed decline in sMdust with age and are more efficient than grain destruction from Type II SNe both in local galaxies and at high-redshift; (iii) a star formation efficiency (mass of gas converted into stars) of a few percent is required to explain the observed metallicity of local dwarf galaxies; and (iv) dust growth in the ISM is not necessary in order to reproduce the values of sMdust derived for the galaxies under study, and, if present, the effect of this process would be erased by galactic outflows. 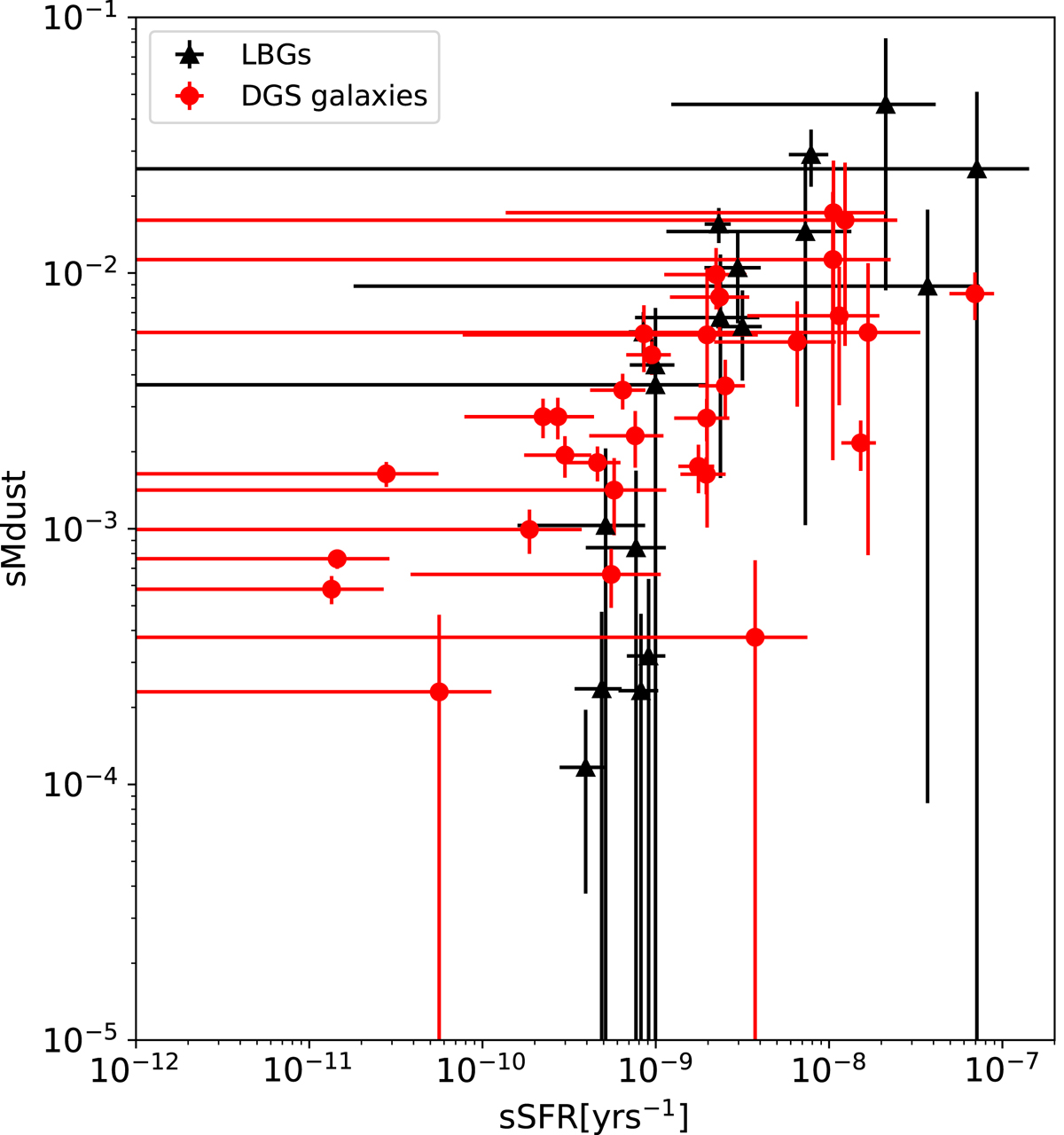