Aims: This is the second paper in our series studying the evolution of parsec-scale radio emission in radio galaxies in the Southern Hemisphere. Following our study of the radio and high-energy properties of γ-ray-emitting sources, here we investigate the kinematic and spectral properties of the parsec-scale jets of radio galaxies that have not yet been detected by the Fermi Large Area Telescope (Fermi-LAT) instrument on board NASA's Fermi Gamma-ray Space Telescope. For many sources, these results represent the first milliarcsecond resolution information in the literature. These studies were conducted within the framework of the Tracking Active Nuclei with Austral Milliarcsecond Interferometry (TANAMI) monitoring program and in the context of high-energy γ-ray observations from Fermi-LAT.
Methods: We took advantage of the regular 8.4 GHz and 22.3 GHz Very Long Baseline Interferometry (VLBI) observations provided by the TANAMI monitoring program, and explored the kinematic properties of six γ-ray-faint radio galaxies. We complemented this with ∼8.5 years of Fermi-LAT data, deriving updated upper limits on the γ-ray emission from this subsample of TANAMI radio galaxies. We included publicly available VLBI kinematics of γ-ray-quiet radio galaxies monitored by the MOJAVE program and performed a consistent Fermi-LAT analysis. We combined these results with those from our previous paper to construct the largest sample of radio galaxies with combined VLBI and γ-ray measurements to date. The connection between parsec-scale jet emission and high-energy properties in the misaligned jets of radio galaxies was explored.
Results: For the first time, we report evidence of superluminal motion up to βapp = 3.6 in the jet of the γ-ray-faint radio galaxy PKS 2153-69. We find a clear trend of higher apparent speed as a function of distance from the jet core, which indicates that the jet is still being accelerated on scales of tens of parsecs, or ∼105 Rs, corresponding to the end of the collimation and acceleration zone in nearby radio galaxies. We find evidence of subluminal apparent motion in the jets of PKS 1258-321 and IC 4296, and no measurable apparent motion for PKS 1549-79, PKS 1733-565, and PKS 2027-308. For all these sources, TANAMI provides the first multi-epoch kinematic analysis on parsec scales. We then compare the VLBI properties of γ-ray-detected and undetected radio galaxies, and find that the two populations show a significantly different distribution of median core flux density, and, possibly, of median core brightness temperature. In terms of correlation between VLBI and γ-ray properties, we find a significant correlation between median core flux density and γ-ray flux, but no correlation with typical Doppler boosting indicators such as median core brightness temperature and core dominance.
Conclusions: Our study suggests that high-energy emission from radio galaxies is related to parsec-scale radio emission from the inner jet, but is not driven by Doppler boosting effects, in contrast to the situation in their blazar counterparts. This implies that γ-ray loudness does not necessarily reflect a higher prevalence of boosting effects. 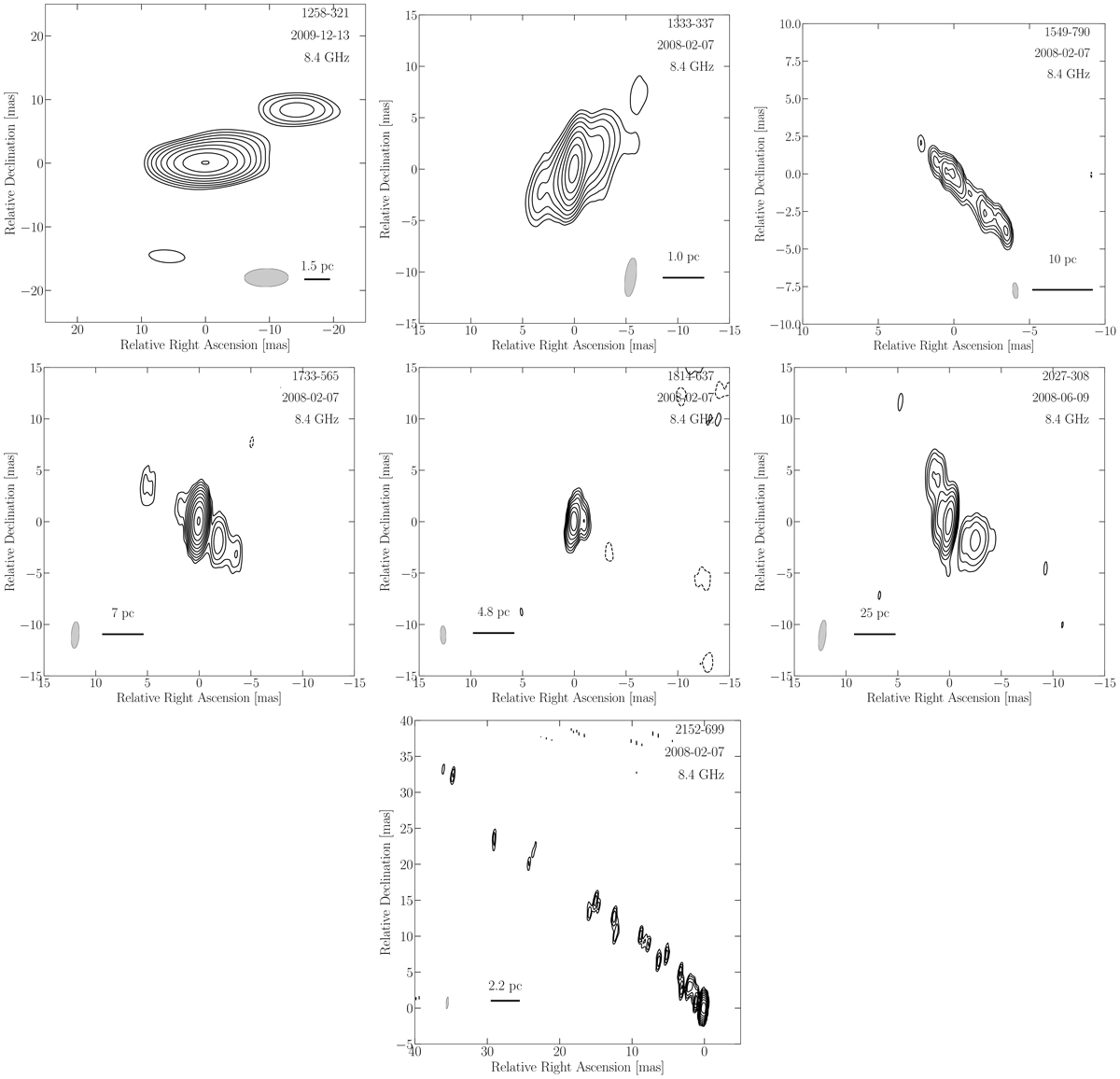