We report on photometry and high-resolution spectroscopy of the chemically peculiar Jupiter-family comet (hereafter JFC) 21P/Giacobini-Zinner. Comet 21P is a well-known member of the carbon-chain-depleted family, but also displays a depletion of amines. We continuously monitored the comet over more than seven months with the two TRAPPIST telescopes (TN and TS), covering a wide heliocentric distance range from 1.60 au inbound to 2.10 au outbound with a perihelion at 1.01 au on September 10, 2018. We computed and followed the evolution of the dust- (represented by Afρ) and gas-production rates of the daughter species OH, NH, CN, C3, and C2 and their relative abundances to OH and to CN over the cometary orbit. We compared them to those measured in the previous apparitions. The activity of the comet and its water production rate reached a maximum of (3.72 ± 0.07) × 1028 mol s-1 on August 17, 2018 (rh = 1.07 au), 24 days before perihelion. The peak value of A(0)fρ was reached on the same date (1646 ± 13) cm in the red filter. Using a sublimation model for the nucleus, we constrained the active surface of the nucleus using the slow-rotator model. The abundance ratios of the various species are remarkably constant over a wide range of heliocentric distances before and after perihelion, showing a high level of homogeneity of the ices in the surface of the nucleus. The behaviour and level of the activity of the comet is also remarkably similar over the last five orbits. In the coma dust colour, 21P shows reflective gradients similar to JFCs. We obtained a high-resolution spectrum of 21P with UVES at ESO Very Large Telescope one week after perihelion. Using the CN B-X (0, 0) violet band, we measured 12C/13C and 14N/15N isotopic ratios of 100 ± 10 and 145 ± 10, respectively, both in very good agreement with the ratios commonly found in comets. We measured an ortho-para abundance ratio of NH3 of 1.16 ± 0.02, corresponding to a nuclear spin temperature of Tspin = 27 ± 1 K, which is similar to other comets. While the abundance ratios in the gaseous coma reveal a peculiar composition, the isotopic and ortho-to-para ratios appear entirely normal. We performed a dynamical simulation of 21P and found that it is likely a young member of the JFC population. We favour a pristine composition scenario to explain the chemical peculiarities of this comet.

Based on observations collected at the European Southern Observatory under ESO program 2101.C-5051. 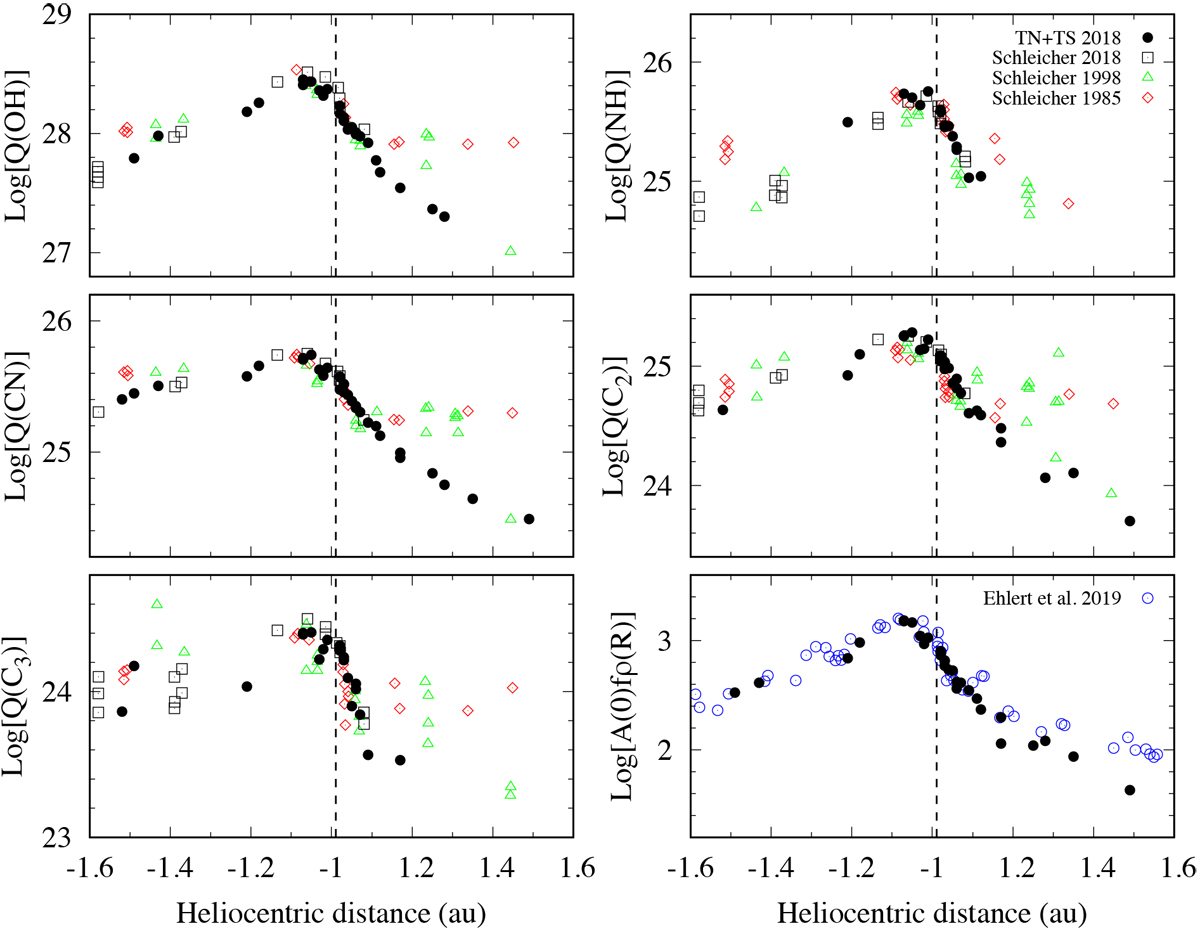