Context. Recent years have seen building evidence that planet formation starts early, in the first ~0.5 Myr. Studying the dust masses available in young disks enables us to understand the origin of planetary systems given that mature disks are lacking the solid material necessary to reproduce the observed exoplanetary systems, especially the massive ones.
Aims: We aim to determine if disks in the embedded stage of star formation contain enough dust to explain the solid content of the most massive exoplanets.
Methods: We use Atacama Large Millimeter/submillimeter Array (ALMA) Band 6 (1.1-1.3 mm) continuum observations of embedded disks in the Perseus star-forming region together with Very Large Array (VLA) Ka-band (9 mm) data to provide a robust estimate of dust disk masses from the flux densities measured in the image plane.
Results: We find a strong linear correlation between the ALMA and VLA fluxes, demonstrating that emission at both wavelengths is dominated by dust emission. For a subsample of optically thin sources, we find a median spectral index of 2.5 from which we derive the dust opacity index β = 0.5, suggesting significant dust growth. Comparison with ALMA surveys of Orion shows that the Class I dust disk mass distribution between the two regions is similar, but that the Class 0 disks are more massive in Perseus than those in Orion. Using the DIANA opacity model including large grains, with a dust opacity value of κ9 mm = 0.28 cm2 g-1, the median dust masses of the embedded disks in Perseus are 158 M⊕ for Class 0 and 52 M⊕ for Class I from the VLA fluxes. The lower limits on the median masses from ALMA fluxes are 47 M⊕ and 12 M⊕ for Class 0 and Class I, respectively, obtained using the maximum dust opacity value κ1.3 mm = 2.3 cm2 g-1. The dust masses of young Class 0 and I disks are larger by at least a factor of ten and three, respectively, compared with dust masses inferred for Class II disks in Lupus and other regions.
Conclusions: The dust masses of Class 0 and I disks in Perseus derived from the VLA data are high enough to produce the observed exoplanet systems with efficiencies acceptable by planet formation models: the solid content in observed giant exoplanets can be explained if planet formation starts in Class 0 phase with an efficiency of ~15%. A higher efficiency of ~30% is necessary if the planet formation is set to start in Class I disks. 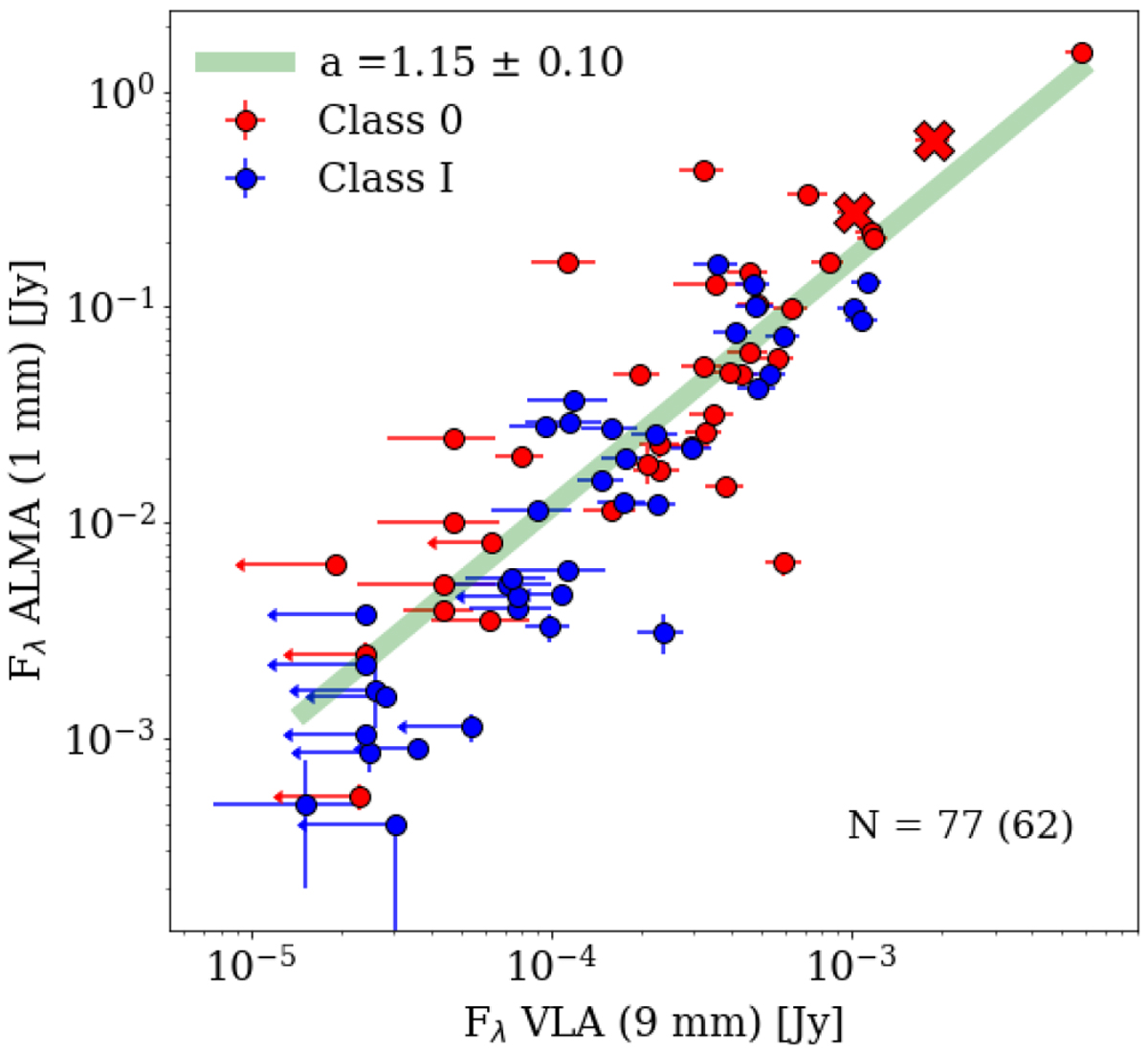