The HR 1614 moving group is not a dissolving cluster

Context. The HR 1614 is an overdensity in velocity space and has for a long time been known as an old (∼2 Gyr) and metal-rich ([Fe/H] ≈ +0.2) nearby moving group that has a dissolving open cluster origin. The existence of such old and metal-rich groups in the solar vicinity is quite unexpected since the vast majority of nearby moving groups are known to be young.
Aims: In the light of new and significantly larger data sets than ever before (astrometric, photometric, and spectroscopic), we aim to re-investigate the properties and origin of the HR 1614 moving group. If the HR 1614 overdensity is a dissolving cluster, its stars should represent a single-age and single-elemental abundance population.
Methods: To identify and characterise the HR 1614 moving group we use astrometric data from Gaia DR2; distances, extinction, and reddening corrections from the StarHorse code; elemental abundances from the GALAH and APOGEE spectroscopic surveys; and photometric metallicities from the SkyMapper survey. Bayesian ages were estimated for the SkyMapper stars. Since the Hercules stream is the closest kinematical structure to the HR 1614 moving group in velocity space and as its origin is believed to be well-understood, we use the Hercules stream for comparison purposes. Stars that are likely to be members of the two groups were selected based on their space velocities.
Results: The HR 1614 moving group is located mainly at negative U velocities, does not form an arch of constant energy in the U - V space, and is tilted in V. We find that the HR 1614 overdensity is not chemically homogeneous, but that its stars exist at a wide range of metallicities, ages, and elemental abundance ratios. They are essentially similar to what is observed in the Galactic thin and thick discs, a younger population (around 3 Gyr) that is metal-rich (-0.2 ≤ [Fe/H] ≤ 0.4) and alpha-poor. These findings are very similar to what is seen for the Hercules stream, which is believed to have a dynamical origin and consists of regular stars from the Galactic discs.
Conclusions: The HR 1614 overdensity has a wide spread in metallicity, [Mg/Fe], and age distributions resembling the general properties of the Galactic disc. It should therefore not be considered a dissolving open cluster, or an accreted population. Based on the kinematic and chemical properties of the HR 1614 overdensity we suggest that it has a complex origin that could be explained by combining several different mechanisms such as resonances with the Galactic bar and spiral structure, phase mixing of dissolving spiral structure, and phase mixing due to an external perturbation. 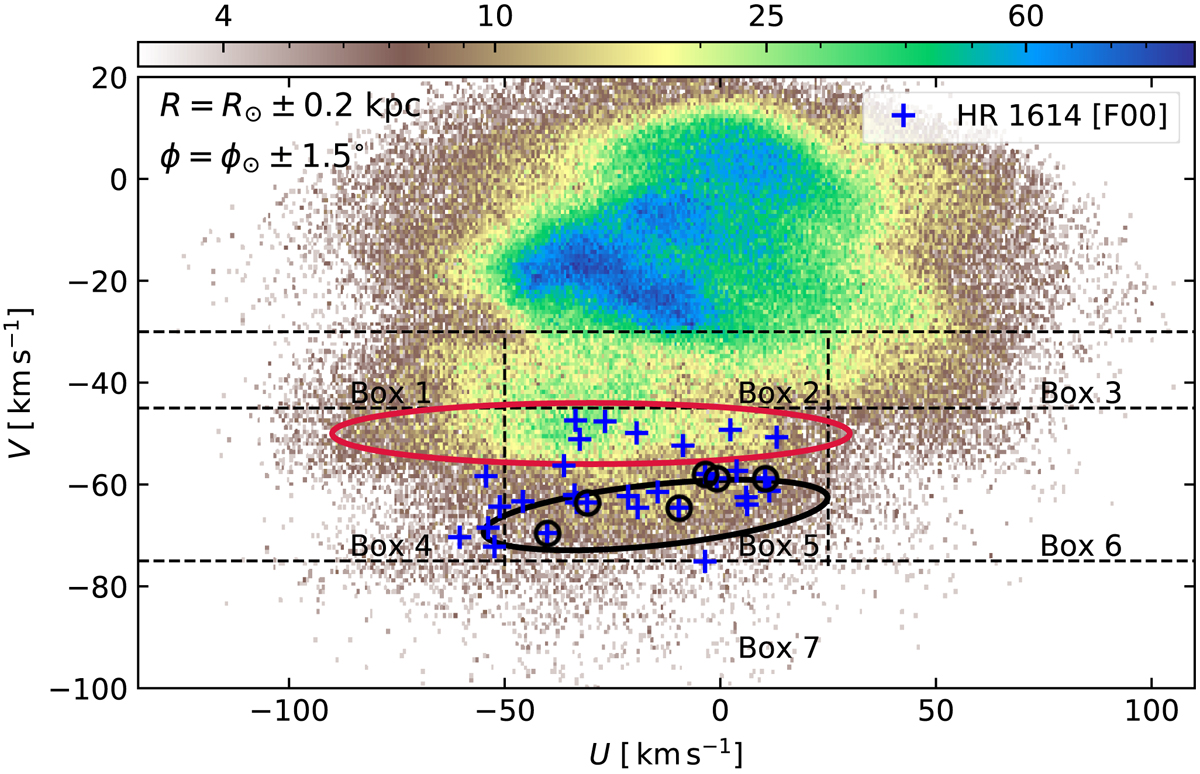