Continuation of the X-ray monitoring of Sgr A*: the increase in bright flaring rate confirmed

Context. The supermassive black hole Sagittarius A* (Sgr A*) is located at the dynamical center of the Milky Way. In a recent study of the X-ray flaring activity from Sgr A* using Chandra, XMM-Newton, and Swift observations from 1999 to 2015, it has been argued that the bright flaring rate has increased from 2014 August 31 while the faint flaring rate decreased from around 2013 August.
Aims: We tested the persistence of these changes in the flaring rates with new X-ray observations of Sgr A* performed from 2016 to 2018 (total exposure of 1.4 Ms).
Methods: We reprocessed the Chandra, XMM-Newton, and Swift observations from 2016 to 2018. We detected 9 flares in the Chandra data and 5 flares in the Swift data that we added to the set of 107 previously detected flares. We computed the intrinsic distribution of flare fluxes and durations corrected for the sensitivity bias using a new method that allowed us to take the error on the flare fluxes and durations into account. From this intrinsic distribution, we determined the average flare detection efficiency for each Chandra, XMM-Newton, and Swift observation. After correcting each observational exposure for this efficiency, we applied the Bayesian blocks algorithm on the concatenated flare arrival times. As in the above-mentioned study, we also searched for a flux and fluence threshold that might lead to a change in flaring rate. We improved the previous method by computing the average flare detection efficiencies for each flux and fluence range.
Results: The Bayesian block algorithm did not detect any significant change in flaring rate of the 121 flares. However, we detected an increase by a factor of about three in the flaring rate of the most luminous and most energetic flares that have occurred since 2014 August 30.
Conclusions: The X-ray activity of Sgr A* has increased for more than four years. Additional studies about the overall near-infrared and radio behavior of Sgr A* are required to draw strong results on the multiwavelength activity of the black hole. 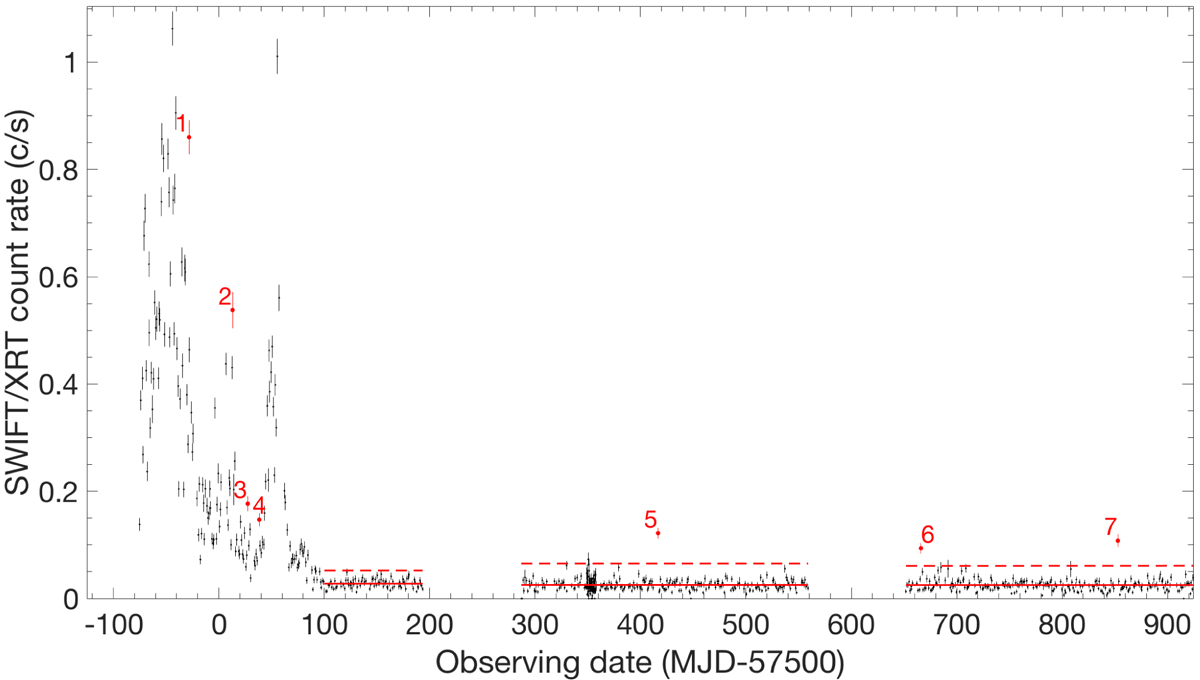