Context. HD 209458 b is an exoplanet with an upper atmosphere undergoing blow-off escape that has mainly been studied using measurements of the Lyα absorption. Recently, high-resolution measurements of absorption in the He I triplet line at 10 830 Å of several exoplanets (including HD 209458 b) have been reported, creating a new opportunity to probe escaping atmospheres.
Aims: We aim to better understand the atmospheric regions of HD 209458 b from where the escape originates.
Methods: We developed a 1D hydrodynamic model with spherical symmetry for the HD 209458 b thermosphere coupled with a non-local thermodynamic model for the population of the He I triplet state. In addition, we performed high-resolution radiative transfer calculations of synthetic spectra for the helium triplet lines and compared them with the measured absorption spectrum in order to retrieve information about the atmospheric parameters.
Results: We find that the measured spectrum constrains the [H]/[H+] transition altitude occurring in the range of 1.2 RP-1.9 RP. Hydrogen is almost fully ionised at altitudes above 2.9 RP. We also find that the X-ray and extreme ultraviolet absorption takes place at effective radii from 1.16 to 1.30 RP, and that the He I triplet peak density occurs at altitudes from 1.04 to 1.60 RP. Additionally, the averaged mean molecular weight is confined to the 0.61-0.73 g mole-1 interval, and the thermospheric H/He ratio should be larger than 90/10, and most likely approximately 98/2. We also provide a one-to-one relationship between mass-loss rate and temperature. Based on the energy-limited escape approach and assuming heating efficiencies of 0.1-0.2, we find a mass-loss rate in the range of (0.42-1.00) ×1011 g s-1 and a corresponding temperature range of 7125-8125 K.
Conclusions: The analysis of the measured He I triplet absorption spectrum significantly constrains the thermospheric structure of HD 209458 b and advances our knowledge of its escaping atmosphere. 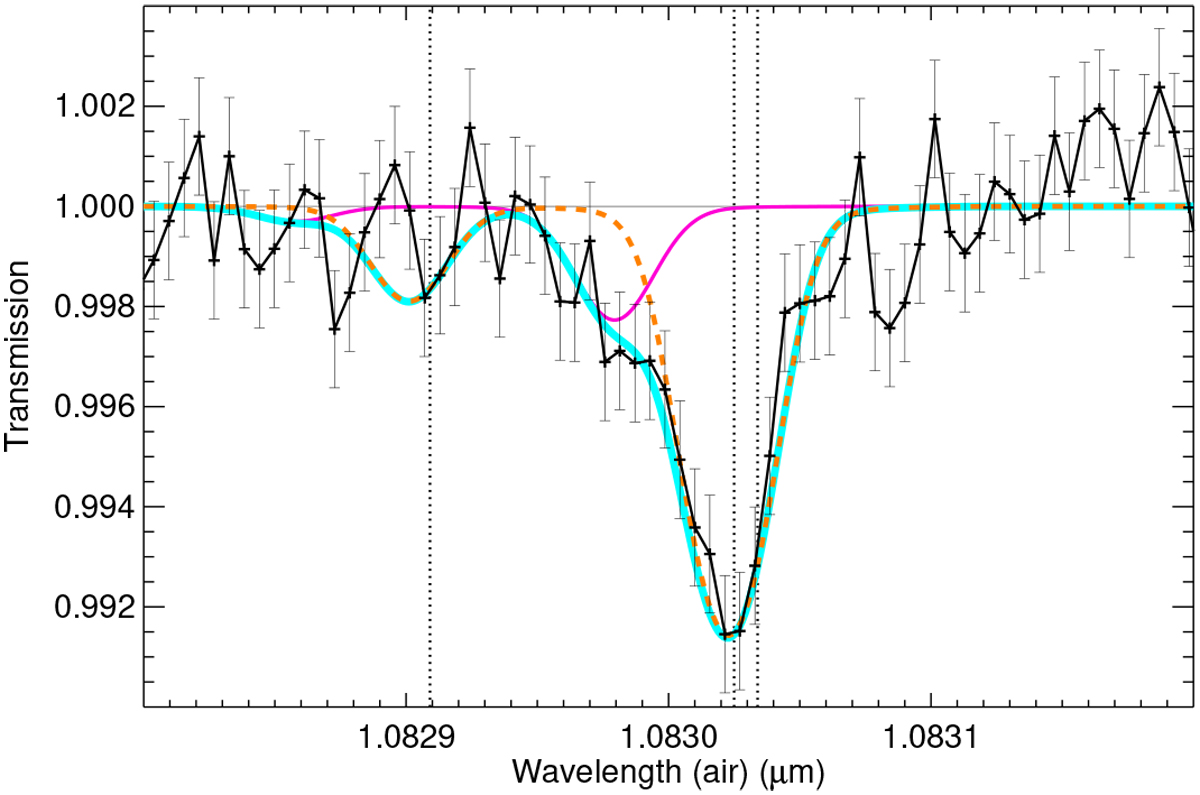