Context. Complex organic molecules (COMs) have been detected in a few Class 0 protostars but their origin is not well understood. While the usual picture of a hot corino explains their presence as resulting from the heating of the inner envelope by the nascent protostar, shocks in the outflow, disk wind, the presence of a flared disk, or the interaction region between envelope and disk at the centrifugal barrier have also been claimed to enhance the abundance of COMs.
Aims: Going beyond studies of individual objects, we want to investigate the origin of COMs in young protostars on a statistical basis.
Methods: We use the CALYPSO survey performed with the Plateau de Bure Interferometer of the Institut de Radioastronomie Millimétrique to search for COMs at high angular resolution in a sample of 26 solar-type protostars, including 22 Class 0 and four Class I objects. We derive the column densities of the detected molecules under the local thermodynamic equilibrium approximation and search for correlations between their abundances and with various source properties.
Results: Methanol is detected in 12 sources and tentatively in one source, which represents half of the sample. Eight sources (30%) have detections of at least three COMs. We find a strong chemical differentiation in multiple systems with five systems having one component with at least three COMs detected but the other component devoid of COM emission. All sources with a luminosity higher than 4 L⊙ have at least one detected COM whereas no COM emission is detected in sources with internal luminosity lower than 2 L⊙, likely because of a lack of sensitivity. Internal luminosity is found to be the source parameter impacting the COM chemical composition of the sources the most, while there is no obvious correlation between the detection of COM emission and that of a disk-like structure. A canonical hot-corino origin may explain the COM emission in four sources, an accretion-shock origin in two or possibly three sources, and an outflow origin in three sources. The CALYPSO sources with COM detections can be classified into three groups on the basis of the abundances of oxygen-bearing molecules, cyanides, and CHO-bearing molecules. These chemical groups correlate neither with the COM origin scenarios, nor with the evolutionary status of the sources if we take the ratio of envelope mass to internal luminosity as an evolutionary tracer. We find strong correlations between molecules that are a priori not related chemically (for instance methanol and methyl cyanide), implying that the existence of a correlation does not imply a chemical link.
Conclusions: The CALYPSO survey has revealed a chemical differentiation in multiple systems that is markedly different from the case of the prototypical binary IRAS 16293-2422. This raises the question of whether all low-mass protostars go through a phase showing COM emission. A larger sample of young protostars and a more accurate determination of their internal luminosity will be necessary to make further progress. Searching for correlations between the COM emission and the jet/outflow properties of the sources may also be promising.

Based on observations carried out with the IRAM Plateau de Bure Interferometer. IRAM is supported by INSU/CNRS (France), MPG (Germany), and IGN (Spain). The CALYPSO calibrated visibility tables and maps are publicly available at http://www.iram-institute.org/EN/content-page-317-7-158-240-317-0.html 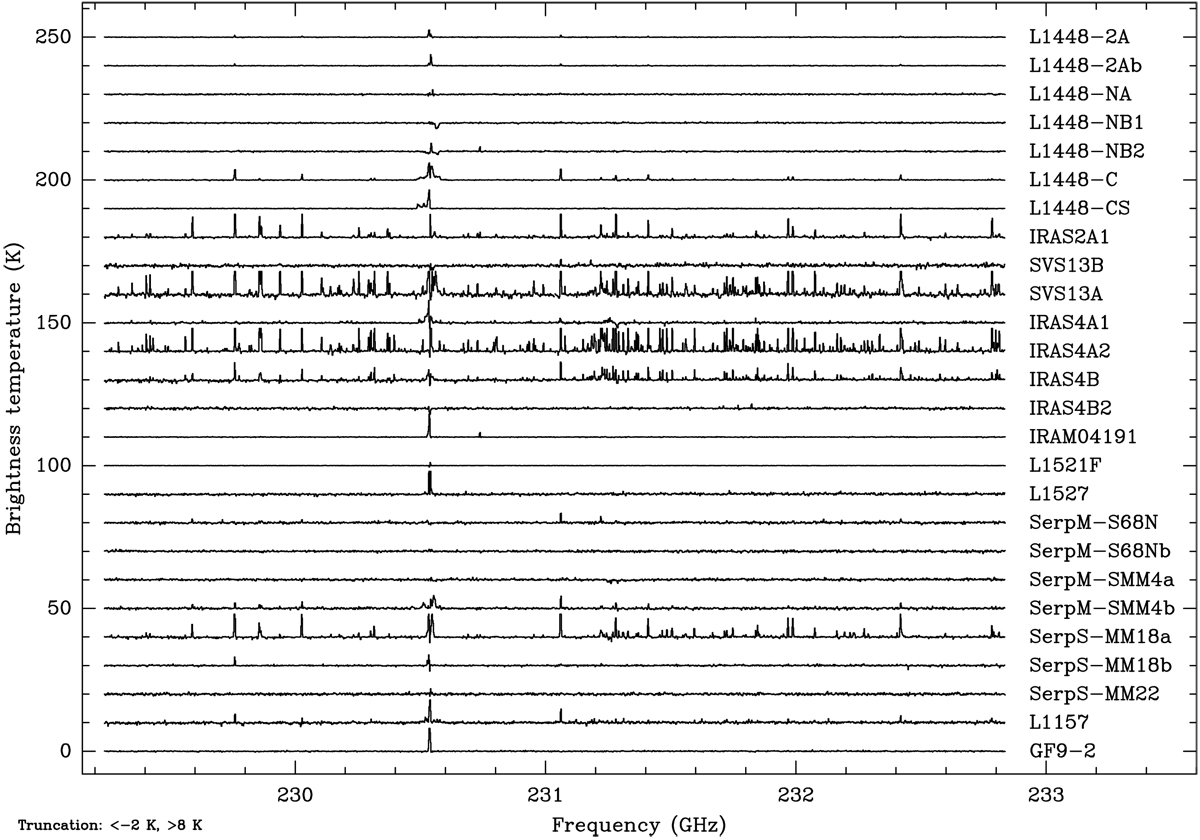