ISPY-NACO Imaging Survey for Planets around Young stars. Survey description and results from the first 2.5 years of observations

Context. The occurrence rate of long-period (a ≳ 50 au) giant planets around young stars is highly uncertain since it is not only governed by the protoplanetary disc structure and planet formation process, but also reflects both dynamical re-structuring processes after planet formation as well as possible capture of planets not formed in situ. Direct imaging is currently the only feasible method to detect such wide-orbit planets and constrain their occurrence rate.
Aims: We aim to detect and characterise wide-orbit giant planets during and shortly after their formation phase within protoplanetary and debris discs around nearby young stars.
Methods: We carry out a large L'-band high-contrast direct imaging survey for giant planets around 200 young stars with protoplanetary or debris discs using the NACO instrument at the ESO Very Large Telescope on Cerro Paranal in Chile. We use very deep angular differential imaging observations with typically >60° field rotation, and employ a vector vortex coronagraph where feasible to achieve the best possible point source sensitivity down to an inner working angle of about 100 mas. This paper introduces the NACO Imaging Survey for Planets around Young stars (NACO-ISPY), its goals and strategy, the target list, and data reduction scheme, and presents preliminary results from the first 2.5 survey years.
Results: We achieve a mean 5 σ contrast of ΔL' = 6.4 ± 0.1 mag at 150 mas and a background limit of L'bg = 16.5±0.2 mag at >1.''5. Our detection probability is >50% for companions with ≳8 MJup at semi-major axes of 80-200 au and >13 MJup at 30-250 au. It thus compares well to the detection space of other state-of-the-art high-contrast imaging surveys. We have already contributed to the characterisation of two new planets originally discovered by VLT/SPHERE, but we have not yet independently discovered new planets around any of our target stars. We have discovered two new close-in low-mass stellar companions around R CrA and HD 193571 and report in this paper the discovery of close co-moving low-mass stellar companions around HD 72660 and HD 92536. Furthermore, we report L'-band scattered light images of the discs around eleven stars, six of which have never been imaged at L'-band before.
Conclusions: The first 2.5 yr of the NACO-ISPY survey have already demonstrated that VLT/NACO combined with our survey strategy can achieve the anticipated sensitivity to detect giant planets and reveal new close stellar companions around our target stars. 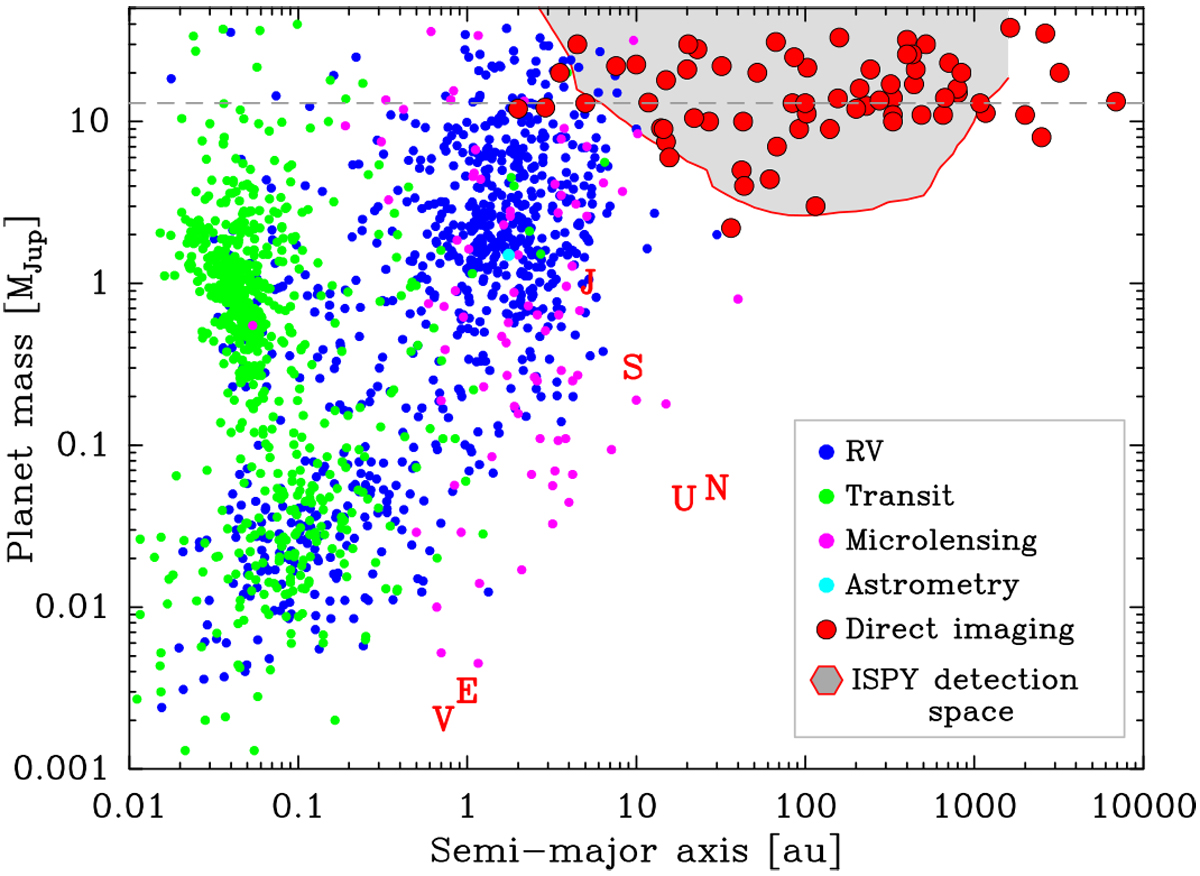