Context. Well studied open clusters (OCs) of the solar neighborhood are frequently used as reference objects to test galactic and stellar theories. For that purpose, their chemical composition needs to be known with a high level of confidence. It is also important to clarify if each OC is chemically homogeneous and if it has a unique chemical signature.
Aims: The aims of this work are (1) to determine accurate and precise abundances of 22 chemical species (from Na to Eu) in the Hyades, Praesepe, and Rupecht 147 by using a large number of stars at different evolutionary states, (2) to evaluate the level of chemical homogeneity of these OCs, and (3) to compare their chemical signatures.
Methods: We gathered ∼800 high resolution and high signal-to-noise spectra of ∼100 members in the three clusters, which were obtained with the latest memberships based on Gaia DR2 data. We built a pipeline, which computes atmospheric parameters and strictly line-by-line differential abundances among twin stars in our sample. With this method, we were able to reach a very high precision in the abundances (0.01-0.02 dex in most of the elements).
Results: We find large differences in the absolute abundances in some elements, which can be attributed to diffusion, non-local thermodynamic equilibrium (non-LTE) effects, or systematics in the analysis. For the three OCs, we find strong correlations in the differential abundances between different pairs of elements. According to our experiment with synthetic data, this can be explained by some level of chemical inhomogeneity. We compare differential abundances of several stars from the Hyades and Praesepe tails: The stars that differ more in chemical abundances also have distinct kinematics, even though they have been identified as members of the tail.
Conclusions: It is possible to obtain high precision abundances using a differential analysis even when mixing spectra from different instruments. With this technique, we find that the Hyades and Preasepe have the same chemical signature when G dwarfs and K giants are considered. Despite a certain level of inhomogeneity in each cluster, it is still possible to clearly distinguish the chemical signature of the older cluster Ruprecht 147 when compared to the Hyades and Praesepe. 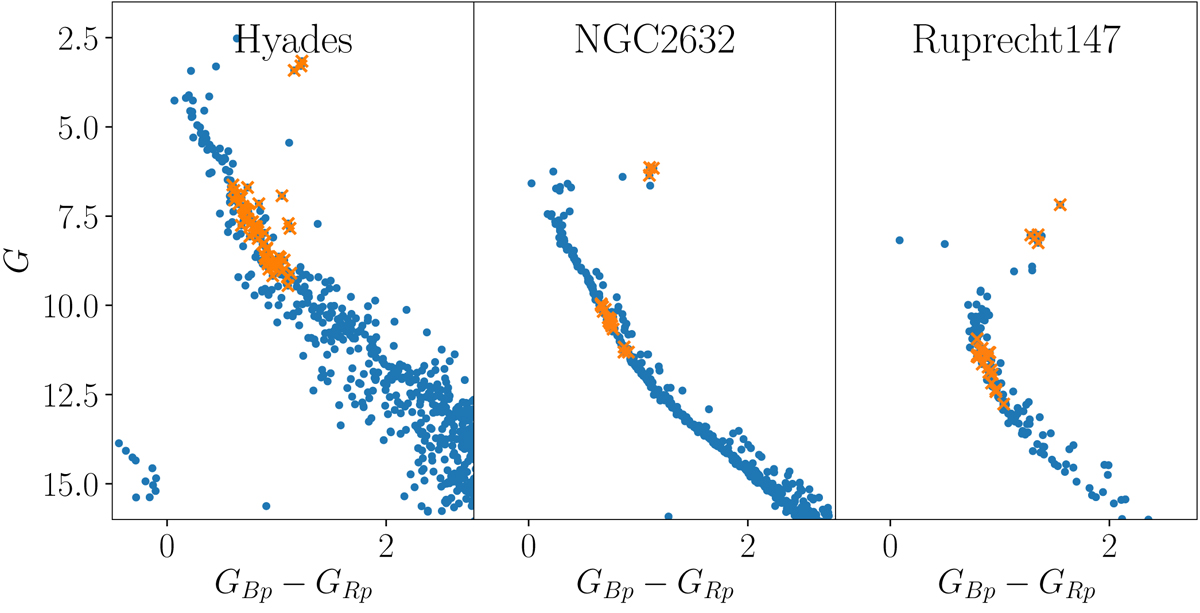