Context. Supernova remnants are known to accelerate cosmic rays on account of their nonthermal emission of radio waves, X-rays, and gamma rays. Although there are many models for the acceleration of cosmic rays in supernova remnants, the escape of cosmic rays from these sources has not yet been adequately studied.
Aims: We aim to use our time-dependent acceleration code RATPaC to study the acceleration of cosmic rays and their escape in post-adiabatic supernova remnants and calculate the subsequent gamma-ray emission from inverse-Compton scattering and Pion decay.
Methods: We performed spherically symmetric 1D simulations in which we simultaneously solved the transport equations for cosmic rays, magnetic turbulence, and the hydrodynamical flow of the thermal plasma in a volume large enough to keep all cosmic rays in the simulation. The transport equations for cosmic rays and magnetic turbulence were coupled via the cosmic-ray gradient and the spatial diffusion coefficient of the cosmic rays, while the cosmic-ray feedback onto the shock structure can be ignored. Our simulations span 100 000 years, thus covering the free-expansion, the Sedov-Taylor, and the beginning of the post-adiabatic phase of the remnant's evolution.
Results: At later stages of the evolution, cosmic rays over a wide range of energy can reside outside of the remnant, creating spectra that are softer than predicted by standard diffusive shock acceleration, and feature breaks in the 10 - 100 GeV-range. The total spectrum of cosmic rays released into the interstellar medium has a spectral index of s ≈ 2.4 above roughly 10 GeV which is close to that required by Galactic propagation models. We further find the gamma-ray luminosity to peak around an age of 4000 years for inverse-Compton-dominated high-energy emission. Remnants expanding in low-density media generally emit more inverse-Compton radiation, matching the fact that the brightest known supernova remnants - RCW86, Vela Jr., HESS J1731-347 and RX J1713.7-3946 - are all expanding in low density environments. 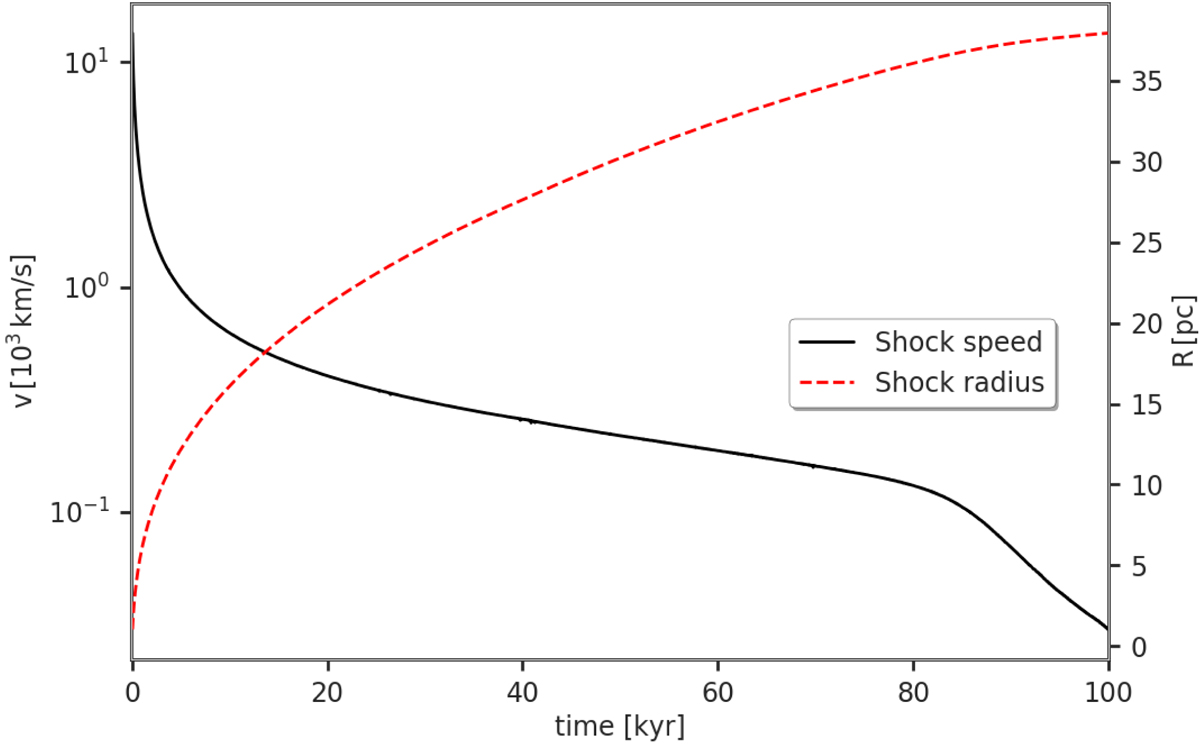