Aims: Kepler-278 and Kepler-391 are two of the three evolved stars known to date on the red giant branch (RGB) to host multiple short-period transiting planets. Moreover, the planets orbiting Kepler-278 and Kepler-391 are among the smallest discovered around RGB stars. Here we present a detailed stellar and planetary characterization of these remarkable systems.
Methods: Based on high-quality spectra from Gemini-GRACES for Kepler-278 and Kepler-391, we obtained refined stellar parameters and precise chemical abundances for 25 elements. Nine of these elements and the carbon isotopic ratios, 12C/13C, had not previously been measured. Also, combining our new stellar parameters with a photodynamical analysis of the Kepler light curves, we determined accurate planetary properties of both systems.
Results: Our revised stellar parameters agree reasonably well with most of the previous results, although we find that Kepler-278 is ~15% less massive than previously reported. The abundances of C, N, O, Na, Mg, Al, Si, S, Ca, Sc, Ti, V, Cr, Mn, Co, Ni, Cu, Zn, Sr, Y, Zr, Ba, and Ce, in both stars, are consistent with those of nearby evolved thin disk stars. Kepler-391 presents a relatively high abundance of lithium (A(Li)NLTE = 1.29 ± 0.09 dex), which is likely a remnant from the main-sequence phase. The precise spectroscopic parameters of Kepler-278 and Kepler-391, along with their high 12C/13C ratios, show that both stars are just starting their ascent on the RGB. The planets Kepler-278b, Kepler-278c, and Kepler-391c are warm sub-Neptunes, whilst Kepler-391b is a hot sub-Neptune that falls in the hot super-Earth desert and, therefore, it might be undergoing photoevaporation of its outer envelope. The high-precision obtained in the transit times allowed us not only to confirm Kepler-278c's TTV signal, but also to find evidence of a previously undetected TTV signal for the inner planet Kepler-278b. From the presence of gravitational interaction between these bodies we constrain, for the first time, the mass of Kepler-278b (Mp = 56 -13+37 M⊕) and Kepler-278c (Mp = 35 -21+9.9 M⊕). The mass limits, coupled with our precise determinations of the planetary radii, suggest that their bulk compositions are consistent with a significant amount of water content and the presence of H2 gaseous envelopes. Finally, our photodynamical analysis also shows that the orbits of both planets around Kepler-278 are highly eccentric (e ~ 0.7) and, surprisingly, coplanar. Further observations (e.g., precise radial velocities) of this system are needed to confirm the eccentricity values presented here.

The reduced spectra (FITS files) are only available at the CDS via anonymous ftp to http://cdsarc.u-strasbg.fr (ftp://130.79.128.5) or via http://cdsarc.u-strasbg.fr/viz-bin/cat/J/A+A/634/A29 Based on observations obtained at the Gemini Observatory, which is operated by the Association of Universities for Research in Astronomy, Inc., under a cooperative agreement with the NSF on behalf of the Gemini partnership: the National Science Foundation (United States), National Research Council (Canada), CONICYT (Chile), Ministerio de Ciencia, Tecnología e Innovación Productiva (Argentina), Ministério da Ciência, Tecnologia e Inovação (Brazil), and Korea Astronomy and Space Science Institute (Republic of Korea). 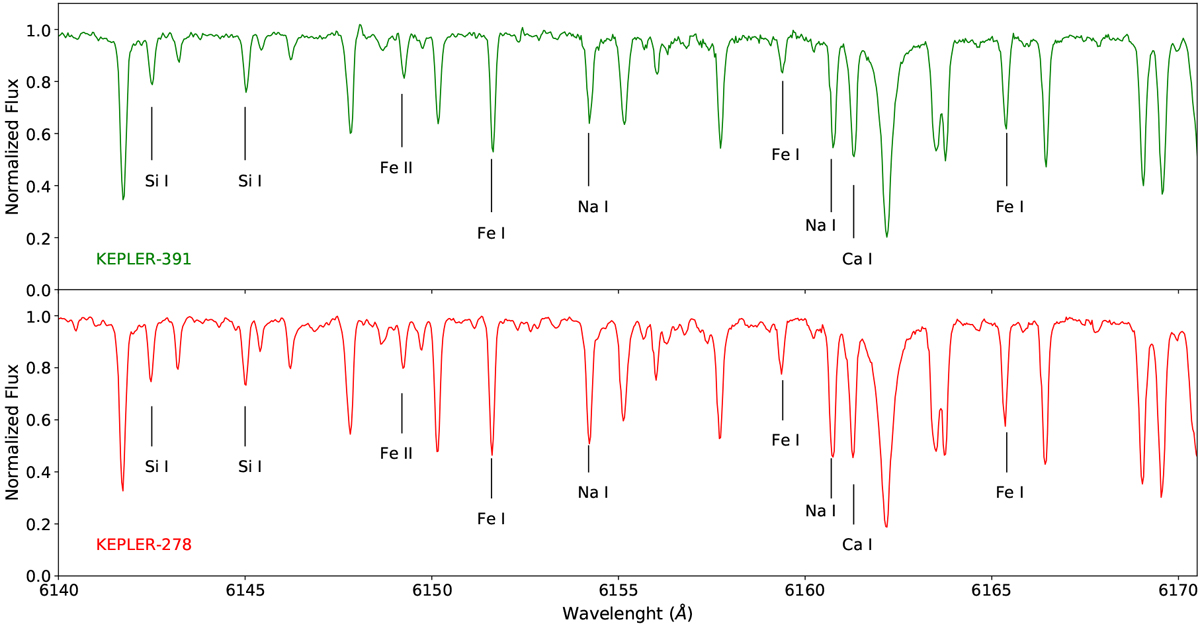