Supernova LSQ13abf was discovered soon after explosion by the La Silla-QUEST Survey and then followed by the Carnegie Supernova Project II at its optical and near-IR wavelengths. Our analysis indicates that LSQ13abf was discovered within two days of explosion and its first ≈10 days of evolution reveal a B-band light curve with an abrupt drop in luminosity. Contemporaneously, the V-band light curve exhibits a rise towards a first peak and the r- and i-band light curves show no early peak. The early light-curve evolution of LSQ13abf is reminiscent of the post-explosion cooling phase observed in the Type Ib SN 2008D, and the similarity between the two objects extends over weeks. Spectroscopically, LSQ13abf also resembles SN 2008D, with P Cygni He I features that strengthen over several weeks. Spectral energy distributions are constructed from the broad-bandphotometry, a UVOIR light curve is constructed by fitting black-body (BB) functions, and the underlying BB-temperature and BB-radius profiles are estimated. Explosion parameters are estimated by simultaneously fitting an Arnett model to the UVOIR light curve and the velocity evolution derived from spectral features, and an in addition to a post-shock breakout cooling model to the first two epochs of the bolometric evolution. This combined model suggests an explosion energy of 1.27 ± 0.23 × 1051 ergs, in addition to a relatively high ejecta mass of 5.94 ± 1.10 M⊙, a 56Ni mass of 0.16 ± 0.02 M⊙, and a progenitor-star radius of 28.0 ± 7.5 R⊙. The ejecta mass suggests the origins of LSQ13abf lie with a > 25 M⊙ zero-age-main-sequence mass progenitor and its estimated radius is three times larger compared to the result obtained from the same analysis applied to observations of SN 2008D, and nine times larger compared to SN 1999ex. Alternatively, a comparison of hydrodynamical simulations of ≳20-25 M⊙ zero-age-main-sequence progenitors that evolve to pre-supernova envelope masses of ≲10 M⊙ and extended (∼100 R⊙) envelopes also broadly match the observations of LSQ13abf.

This paper includes data gathered with the Nordic Optical Telescope at the Observatorio del Roque de los Muchachos, La Palma, Spain, and the Magellan 6.5 m Telescopes located at Las Campanas Observatory, Chile. Photometry and spectra presented in this paper are available on http://WISeREP. 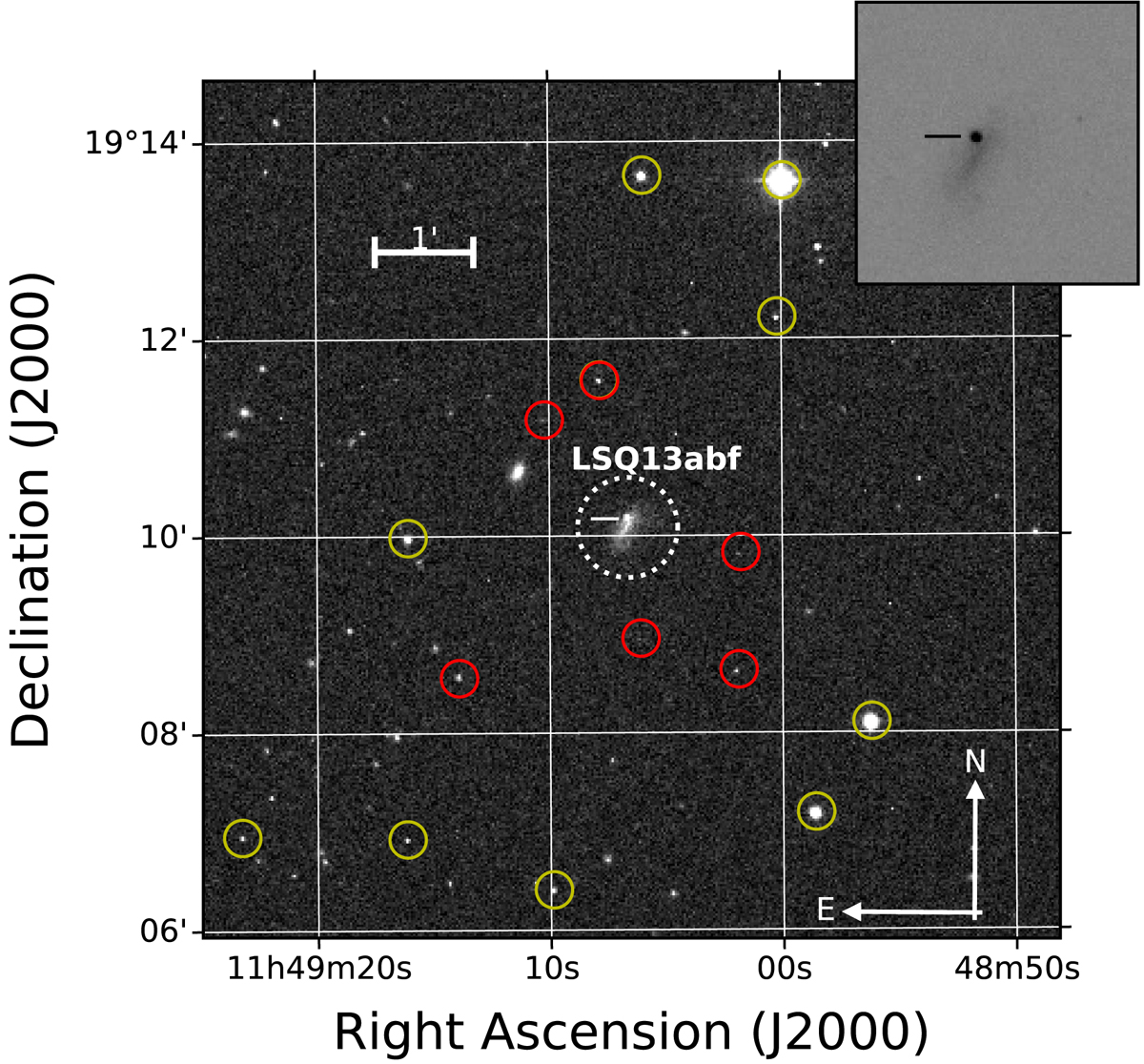