Context. IceCube has reported a very-high-energy neutrino (IceCube-170922A) in a region containing the blazar . Correlated gamma-ray activity has led to the first high-probability association of a high-energy neutrino with an extragalactic source. This blazar has been found to be in a radio outburst during the neutrino event.
Aims: Our goal is to probe the sub-milliarcsecond properties of the radio jet right after the neutrino detection and during the further evolution of the radio outburst.
Methods: We performed target of opportunity observations at 43 GHz frequency using very long baseline interferometry imaging, corresponding to 7 mm in wavelength, with the Very Long Baseline Array two and eight months after the neutrino event.
Results: We produced two images of the radio jet of TXS 0506+056 at 43 GHz with angular resolutions of (0.2 × 1.1) mas and (0.2 × 0.5) mas, respectively. The source shows a compact, high brightness temperature core, albeit not approaching the equipartition limit and a bright and originally very collimated inner jet. Beyond approximately 0.5 mas from the millimeter-VLBI core, the jet loses this tight collimation and expands rapidly. During the months after the neutrino event associated with this source, the overall flux density is rising. This flux density increase happens solely within the core. Notably, the core expands in size with apparent superluminal velocity during these six months so that the brightness temperature drops by a factor of three despite the strong flux density increase.
Conclusions: The radio jet of TXS 0506+056 shows strong signs of deceleration and/or a spine-sheath structure within the inner 1 mas, corresponding to about 70-140 pc in deprojected distance, from the millimeter-VLBI core. This structure is consistent with theoretical models that attribute the neutrino and gamma-ray production in TXS 0506+056 to interactions of electrons and protons in the highly relativistic jet spine with external photons originating from a slower moving jet region. Proton loading due to jet-star interactions in the inner host galaxy is suggested as the possible cause of deceleration. 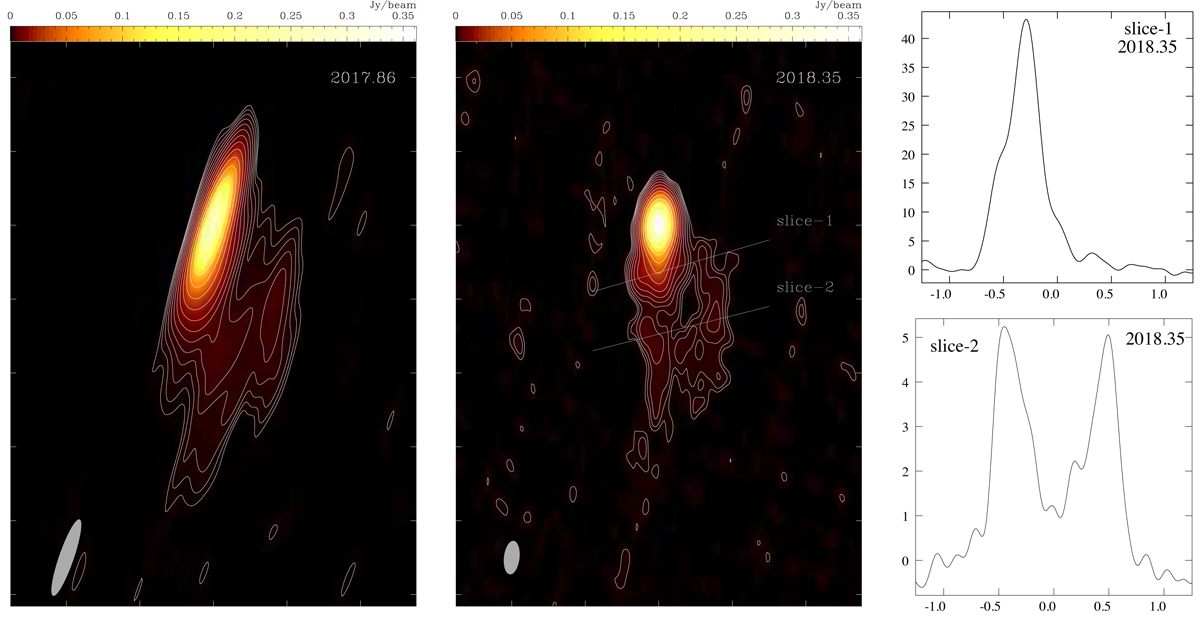