Filaments in VIPERS: galaxy quenching in the infalling regions of groups

We study the quenching of galaxies in different environments and its evolution in the redshift range 0.43 ≤ z ≤ 0.89. For this purpose, we identify galaxies inhabiting filaments, the isotropic infall region of groups, the field, and groups in the VIMOS Public Extragalactic Redshift Survey (VIPERS). We classify galaxies as quenched (passive), through their NUV - r versus r - K colours. We study the fraction of quenched galaxies (Fr) as a function of stellar mass and environment at two redshift intervals. Our results confirm that stellar mass is the dominant factor determining galaxy quenching over the full redshift range explored. We find compelling evidence of evolution in the quenching of intermediate mass galaxies (9.3 ≤ log (M⋆/M⊙) ≤ 10.5) for all environments. For this mass range, Fr is largest for galaxies in groups and smallest for galaxies in the field, while galaxies in filaments and in the isotropic infall regions appear to have intermediate values with the exception of the high redshift bin, where the latter show similar fraction of quenched galaxies as in the field. Galaxies in filaments are systematically more quenched than their counterparts infalling from other directions, in agreement to similar results found at low redshift. The least massive galaxies in our samples do not show evidence of internal or environmental quenching. 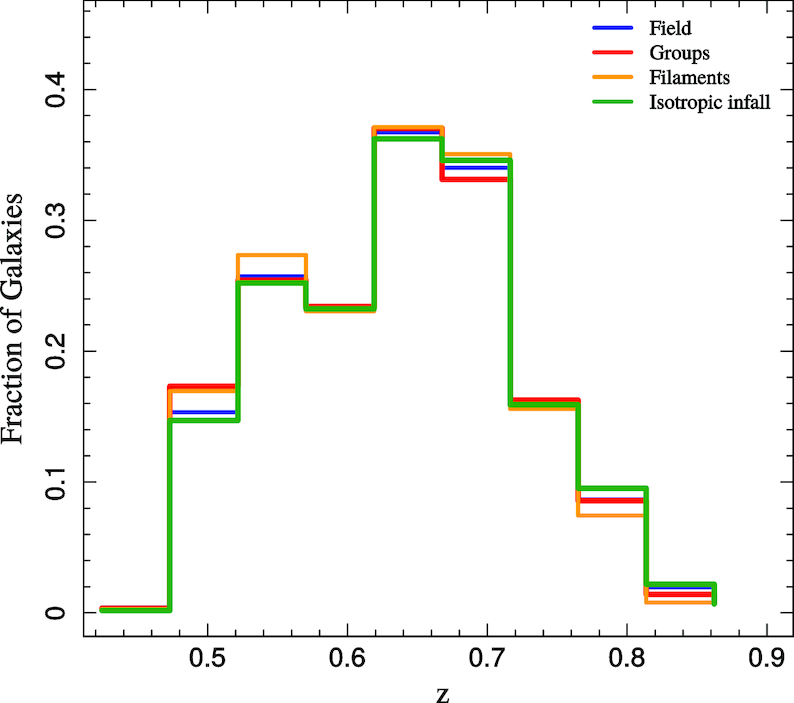