Revisiting the hardening of the stellar ionizing radiation in galaxy discs

In this work we explore accurate new ways to derive the ionization parameter (U) and the equivalent effective temperature (T*) in H II regions using emission-line intensities from the ionized gas. The so-called softness parameter (η), based on [O II], [O III], [S II], and [S III], has been proposed to estimate the hardening of the ionizing incident field of radiation, but the simplest relation of this parameter with T* also depends on U and metallicity (Z). Here we provide a Bayesian-like code (HCM-TEFF) that compares the observed emission lines of η with the predictions of a large grid of photoionization models giving precise estimations of both U and T* when Z is known. We also study the radial variation of these parameters in well-studied disc galaxies observed by the CHAOS collaboration. Our results indicate that the observed radial decreasing of η can be attributed to a radial hardening of T* across galactic discs as in NGC 628 and NGC 5457. On the other hand NGC 5194, which presents a positive slope of the fitting of the softness parameter, has a flat slope in T*. On the contrary the three galaxies do not seem to present large radial variations of the ionization parameter. When we inspect a larger sample of galaxies, we observe steeper radial variations of T* in less bright and later-type galaxies, mimicking a similar trend observed for Z, but the studied sample should be enlarged to obtain more statistically significant conclusions. 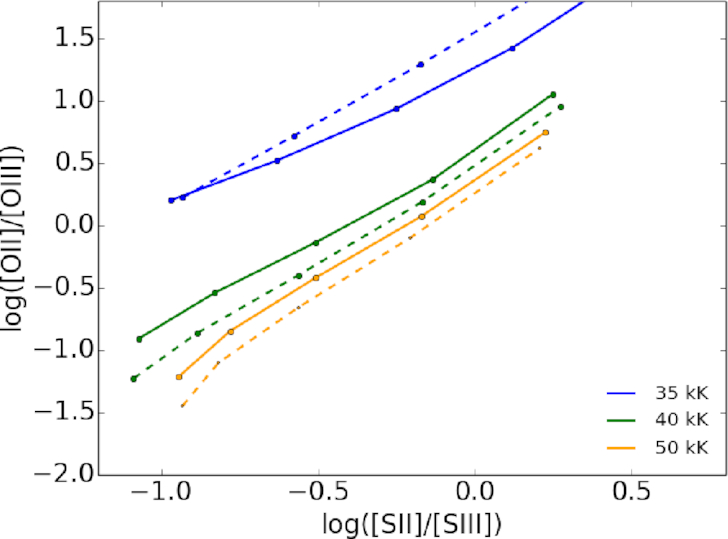