Uncertainty in mass-observable scaling relations is currently the limiting factor for galaxy-cluster-based cosmology. Weak gravitational lensing can provide direct mass calibration and reduce the mass uncertainty. We present new ground-based weak lensing observations of 19 South Pole Telescope (SPT) selected clusters at redshifts 0.29 ≤ z ≤ 0.61 and combine them with previously reported space-based observations of 13 galaxy clusters at redshifts 0.576 ≤ z ≤ 1.132 to constrain the cluster mass scaling relations with the Sunyaev-Zel'dovich effect (SZE), the cluster gas mass Mgas and YX, the product of Mgas and X-ray temperature. We extend a previously used framework for the analysis of scaling relations and cosmological constraints obtained from SPT-selected clusters to make use of weak lensing information. We introduce a new approach to estimate the effective average redshift distribution of background galaxies and quantify a number of systematic errors affecting the weak lensing modelling. These errors include a calibration of the bias incurred by fitting a Navarro-Frenk-White profile to the reduced shear using N-body simulations. We blind the analysis to avoid confirmation bias. We are able to limit the systematic uncertainties to 5.6% in cluster mass (68% confidence). Our constraints on the mass-X-ray observable scaling relation parameters are consistent with those obtained by earlier studies and our constraints for the mass-SZE scaling relation are consistent with the simulation-based prior used in the most recent SPT-SZ cosmology analysis. We can now replace the external mass calibration priors used in previous SPT-SZ cosmology studies with a direct, internal calibration obtained for the same clusters. 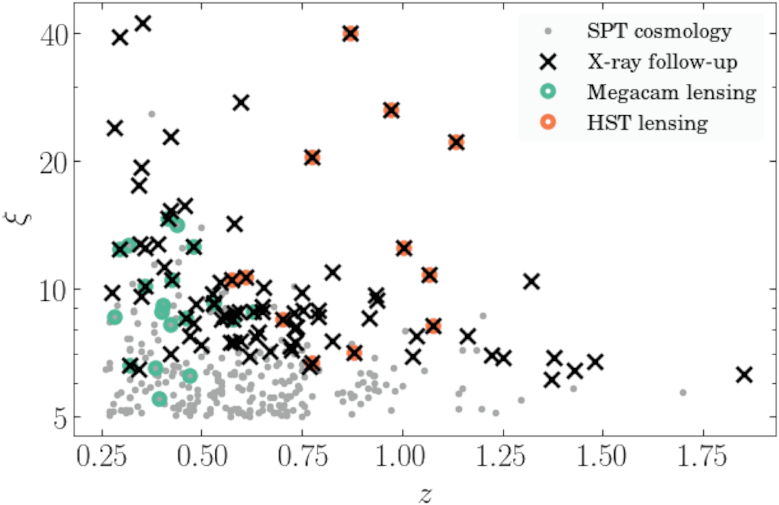