Covariations of chromospheric and photometric variability of the young Sun analogue HD 30495: evidence for and interpretation of mid-term periodicities

This study reports the synchronization between the chromospheric and photometric variability at time-scale of about 1.6-1.8 yr as observed for the young, rapidly rotating solar analogue HD 30495. In addition, HD 30495 may be presenting evidence of surface differential rotation at time-scales of about 11 d and 21 d, as well as the sunspot-like decadal cycles at 11-12 yr or so. We apply a new gapped wavelet method of time-frequency analysis for studying the variability in a new composite of the chromospheric S-index (1967-2018) and the longest photometric Δ(b + y)/2 index (1993-2018). We discuss and interpret our results in relation to other observed mid-term periodicities roughly of the same time-scales that had been found recently from not only chromospheric and photospheric activity indices but also from coronal X-ray emissions as observed in a considerably large set of stellar samples including those young Sun analogues from the Kepler satellite project. Thus, there is an apparent universality of such mid-term activity modulation time-scales as this solar-stellar magnetic phenomenon is well observed directly for a host of solar activity related indices covering the photopsheric, chromospheric, coronal, and even the heliospheric (utilizing the measures of incoming galactic cosmic rays as a probe of activity variations) activity records. This is why we made a further attempt to interpret the results in search of a realistic generation mechanism as well as spatio-temporal persistency of the phenomenon under a wide scenario of dynamo simulations. 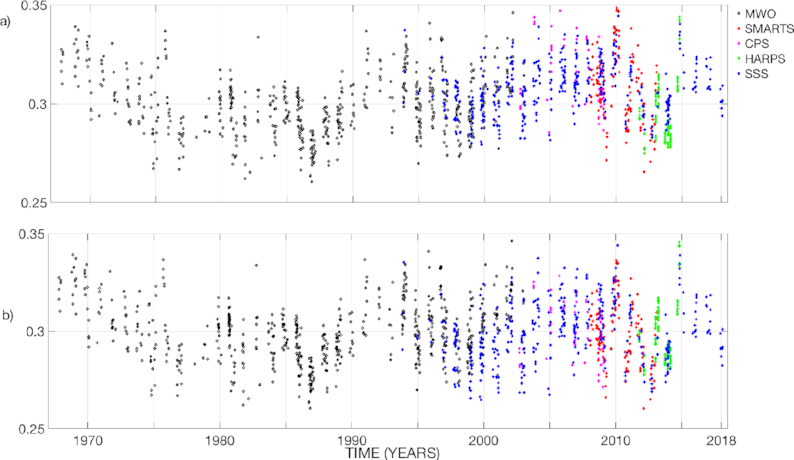