The trajectories of galaxies in groups: mass-loss and preprocessing

We present a study of environmental effects and preprocessing in a large galaxy group using a high-resolution, zoom-in simulation run with the GASOLINE2 hydrodynamics code. We categorize galaxies that were always in distinct haloes as unaccreted, galaxies that were distinct before accretion on to the main group as single, and galaxies that were in external sub-groups before accretion on to the main group as grouped. The unaccreted galaxy population experiences steady growth in dark matter, gas, and stellar mass. Both single- and group-accreted galaxies begin to lose dark matter and gas after first accretion on to any host but continue to grow in stellar mass. Individual trajectories show that galaxies cease mass growth within roughly three virial radii of the main group. Single galaxies continue to form stars until the group virial radius is crossed, when they begin to lose both dark matter and gas. Grouped galaxies peak in mass when joining their external sub-group, indicating that they experience preprocessing. Most accreted galaxies retain their accumulated stellar mass. The total mass-loss is dominated by tidal stripping, with evidence for additional gas stripping via ram pressure. Most accreted galaxies are quenched ∼(0.5-2.5) Gyr after accretion on to any group. These differing histories place unaccreted, single, and grouped galaxies in distinct regions of the stellar mass-to-halo mass (SMHM) relation. This suggests that preprocessed galaxies are a key source of scatter in the SMHM relation for mixed galaxy populations. 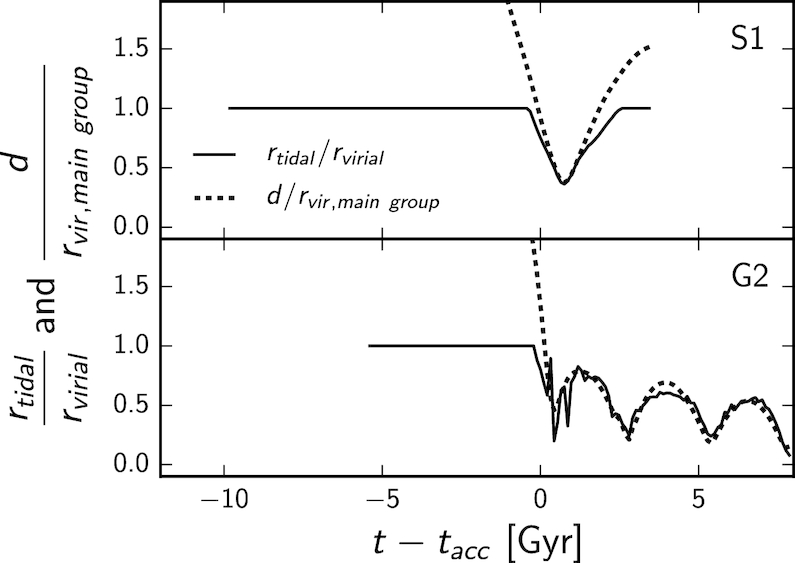