The number and properties of observed gravitational microlensing events depend on the distribution and kinematics of stars and other compact objects along the line of sight. In particular, precise measurements of the microlensing optical depth and event rate toward the Galactic bulge enable strict tests of competing models of the Milky Way. Previous estimates, based on samples of up to a few hundred events, gave larger values than expected from the Galactic models and were difficult to reconcile with other constraints on the Galactic structure. Here we used long-term photometric observations of the Galactic bulge by the Optical Gravitational Lensing Experiment (OGLE) to select a homogeneous sample of 8000 gravitational microlensing events. We created the largest and most accurate microlensing optical depth and event rate maps of the Galactic bulge. The new maps ease the tension between the previous measurements and Galactic models. They are consistent with some earlier calculations based on bright stars and are systematically ∼30% smaller than the other estimates based on “all-source” samples of microlensing events. The difference is caused by the careful estimation of the source star population. The new maps agree well with predictions based on the Besançon model of the Galaxy. Apart from testing the Milky Way models, our maps may have numerous other applications, such as the measurement of the initial mass function or constraining the dark matter content in the Milky Way center. The new maps will also inform the planning of future space-based microlensing experiments by revising the expected number of events. 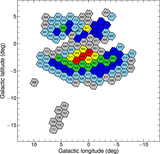