The coevolution of galaxies and the supermassive black holes (SMBHs) at their centers via hierarchical galaxy mergers is a key prediction of ΛCDM cosmology. As gas and dust are funneled to the SMBHs during the merger, the SMBHs light up as active galactic nuclei (AGNs). In some cases, a merger of two galaxies can encounter a third galaxy, leading to a triple merger, which would manifest as a triple AGN if all three SMBHs are simultaneously accreting. Using high spatial resolution X-ray, near-IR, and optical spectroscopic diagnostics, we report here a compelling case of an AGN triplet with mutual separations <10 kpc in the advanced merger SDSS J084905.51+111447.2 at z = 0.077. The system exhibits three nuclear X-ray sources, optical spectroscopic line ratios consistent with AGN in each nucleus, a high excitation near-IR coronal line in one nucleus, and broad Paα detections in two nuclei. Hard X-ray spectral fitting reveals a high column density along the line of sight, consistent with the picture of late-stage mergers hosting heavily absorbed AGNs. Our multiwavelength diagnostics support a triple AGN scenario, and we rule out alternative explanations such as star formation activity, shock-driven emission, and emission from fewer than three AGN. The dynamics of gravitationally bound triple SMBH systems can dramatically reduce binary SMBH inspiral timescales, providing a possible means to surmount the “Final Parsec Problem.” AGN triplets in advanced mergers are the only observational forerunner to bound triple SMBH systems and thus offer a glimpse of the accretion activity and environments of the AGNs prior to the gravitationally bound triple phase. 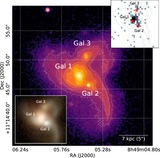