We present a radio continuum study of a population of extremely young and starburst galaxies, termed as blueberries at ∼1 GHz using the upgraded Giant Metrewave Radio Telescope. We find that their radio-based star formation rate (SFR) is suppressed by a factor of ∼3.4 compared to the SFR based on optical emission lines. This might be due to (i) the young ages of these galaxies as a result of which a stable equilibrium via feedback from supernovae has not yet been established; (ii) escape of cosmic-ray electrons via diffusion or galactic-scale outflows. The estimated nonthermal fraction in these galaxies has a median value of ∼0.49, which is relatively lower than that in normal star-forming galaxies at such low frequencies. Their inferred equipartition magnetic field has a median value of 27 μG, which is higher than those in more evolved systems like spiral galaxies. Such high magnetic fields suggest that small-scale dynamo rather than large-scale dynamo mechanisms might be playing a major role in amplifying magnetic fields in these galaxies. 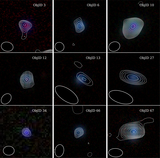