L1551 IRS 5 is a FUor-like object located in the Taurus star-forming region. We present Atacama Large Millimeter/submillimeter Array (ALMA) 1.3 mm continuum observations using a wide range of baselines. The observations recovered the two circumstellar disks comprising the system and, for the first time, resolved the circumbinary ring. We determined the geometry and estimated lower mass limits for the circumstellar disks using simple models. We calculated lower limits for the total mass of both circumstellar disks. After subtracting the two circumstellar disk models from the image, the residuals show a clearly resolved circumbinary ring. Using a radiative transfer model, we show that geometrical effects can explain some of the brightness asymmetries found in the ring. The remaining features are interpreted as enhancements in the dust density. 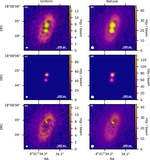