We present extensive ground-based and Hubble Space Telescope (HST) photometry of the highly reddened, very nearby SN Ia 2014J in M82, covering the phases from 9 days before to about 900 days after the B-band maximum. SN 2014J is similar to other normal SNe Ia near the maximum light, but it shows flux excess in the B band in the early nebular phase. This excess flux emission can be due to light scattering by some structures of circumstellar materials located at a few 1017 cm, consistent with a single-degenerate progenitor system or a double-degenerate progenitor system with mass outflows in the final evolution or magnetically driven winds around the binary system. At t ̃ +300 to ̃+500 days past the B-band maximum, the light curve of SN 2014J shows a faster decline relative to the 56Ni decay. That feature can be attributed to the significant weakening of the emission features around [Fe III] λ4700 and [Fe II] λ5200 rather than the positron escape, as previously suggested. Analysis of the HST images taken at t > 600 days confirms that the luminosity of SN 2014J maintains a flat evolution at the very late phase. Fitting the late-time pseudobolometric light curve with radioactive decay of 56Ni, 57Ni, and 55Fe isotopes, we obtain the mass ratio 57Ni/56Ni as 0.035 ± 0.011, which is consistent with the corresponding value predicted from the 2D and 3D delayed-detonation models. Combined with early-time analysis, we propose that delayed-detonation through the single-degenerate scenario is most likely favored for SN 2014J. 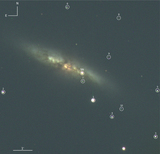