We present new narrow-band Hα imaging for 24 nearby edge-on galaxies in the Continuum Halos in Nearby Galaxies—an EVLA Survey (CHANG-ES). We use the images in conjunction with the Wide-field Infrared Survey Explorer 22 μm imaging of the sample to estimate improved star formation rates (SFRs) using the updated recipe from Vargas et al. We explore correlations between the updated star formation properties and radio continuum scale heights, scale lengths, and diameters, measured in Krause et al. We find a newly discovered correlation between SFR and radio scale height that did not exist using mid-infrared (IR) only SFR calibrations. This implies that a mid-IR extinction correction should be applied to SFR calibrations when used in edge-on galaxies, due to attenuation by dust. The updated SFR values also show newly discovered correlations with radio scale length and radio diameter, implying that the previously measured relationship between radio scale height and radio diameter originates from star formation within the disk. We also identify a region of star formation located at extreme distance from the disk of NGC 4157, possibly ionized by a single O5.5 V star. This region is spatially coincident with an extended ultraviolet disk feature, as traced by the Galaxy Evolution Explorer near-ultraviolet imaging. We theorize that the star formation feature arose due to gravitational instability within gas from an accretion event. New Hα images from this work can be found at the CHANG-ES data release website, https://www.queensu.ca/changes. 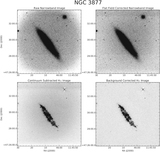